Athletics: Best of the decade
Next Story

"I’m mainly focusing on tactical play and concentration in the final third of the pitch..."

The Under 17 girls go through drills at the FUFA Techinical Center. Photos by Stephen Mayamba

"I’m mainly focusing on tactical play and concentration in the final third of the pitch..."

The U-17 National team captain Juliet Nalukenge says her side is ready for the challenge that Ethiopia will provide when the two sides faceoff in the FIFA U-17 Women World Cup Qualifiers' first leg tie this Saturday at Lugogo.

Nalukenge's remarks come shortly after the national side entered a training camp at the FUFA Technical Centre on Friday last week to boost their preparations. The return leg will be played a week later in Addis Ababa.

"We can only do one thing to express ourselves and give it our best shot. We are geared to performing well and promise to do our very best to see to it that we qualify, "stated Nalukenge.

"Playing in the world cup qualifiers is a grand opportunity that is going to help us develop as a team and individually as players. We are looking forward to the experience which we believe will be a good one," Nalukenge added.

The team under Coach Ayub Khalifa Kiyingi, deputized by Hadija Namuyanja faces a big task against Ethiopia who has a good record over Uganda. 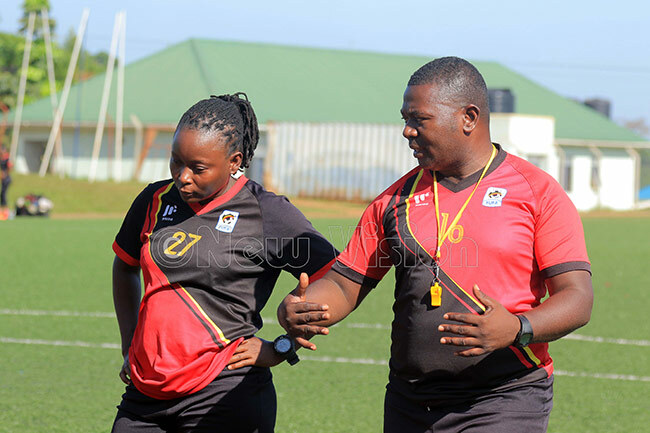 Coach Khalifa (right) delivers his message to the players during training.

"I'm mainly focusing on tactical play and concentration in the final third of the pitch. My aim is to sharpen the minds of players and helps them make quick and efficient decisions to execute attacks,"

"That will deliver the goals that the team needs to advance past the Ethiopians and even qualify," Khalifa said.

The two trophies won by this team last year (COSAFA U-17 and CECAFA U-17) is enough boost for the national side that has Oliver Mbekeka and James Magala as the other members of the technical bench serving as fitness and goalkeepers' coaches respectively. Joan Namusisi is the team manager.