MENU
Who is Eddie Kwizera, the man behind fall of six MPs?
Previous Story

The top stories that shook Uganda
Next Story

Lt. Col. Edith Nakalema, the head of the State House Anti-Corruption Unit, told the affected people that Abid Alam had offered part of his land to resettle some of the families evicted from Luwunga Central Forest Reserve that had not been resettled.

Lt. Col. Edith Nakalema, the head of the State House Anti-Corruption Unit, told the affected people that Abid Alam had offered part of his land to resettle some of the families evicted from Luwunga Central Forest Reserve that had not been resettled.

Former minister Sam Bitangaro has been dragged to court by the Anti-Corruption Unit, over the saga surrounding the sale of land in Mityana.

Bitangaro, William Tumwine a director in the ministry of gender and his wife Stella Kakuba, lawyer Francis Owor Onyango have been charged with seven counts related to obtaining over sh3b from Kiboga Twegatte cooperative society limited to avail them land for resettlement after they were evicted from Luwunga Central government reserve in Kiboga

They were not allowed to take a plea.

How it all started:
The land dispute between city tycoon Abid Alam and some residents of Kassanda district flared up again recently.

The residents of Bukompe village, Nalutuntu sub-county in Kassanda are protesting Abid Alam's move to construct access roads across the disputed land.

The affected people were originally evicted from Luwunga forest reserve in Kiboga district. With the intervention of the Government, they allegedly acquired land in Bukompe village. But the same land is allegedly claimed by Abid Alam.

During the past few days, workers who are said to have been hired by Abid Alam went with graders to open up access roads on the land measuring about three square miles. The roads are being opened without due regard to the plantations owned by the tenants, some of whom have lost crops in the process.

When New Vision visited the area, the newly constructed roads were clearly visible. Some of the roads go through people's gardens.

"Whether it is a garden or home, the graders just destroy it and people are in tears after losing lots of property," Esther Mukandanga, the acting chairperson of the village, said.

Some residents claim that on Monday this week, they saw a vehicle carrying away property from Valu's home.

"We wonder why our chairperson went missing, yet he was part of the process of buying this land. We appeal to the Government to intervene," Mukandanga said.

According to the residents, the move by Abid Alam to construct access roads through their bibanja was calculated to evict them forcefully. They claimed that anyone who tries to resist the construction of an access road is beaten up by the workers.

Background
For many years, the land at Bukoba, Bukompe, and the surrounding villages has been at the centre of a dispute between tenants and Abid Alam. The residents are accusing bid Alam of forcibly evicting them and destroying their property.

"When we were evicted from Kiboga, the Government bought us this land, but we were surprised to see that after living here for five years, Abid Alam started claiming ownership of the land," Fred Kwagala, one of the affected residents, said.

Kwagala said the land was bought from a Kampala-based lawyer. He

called on the Government to sort out the issues between Abid Alam and the lawyer who sold them the land. 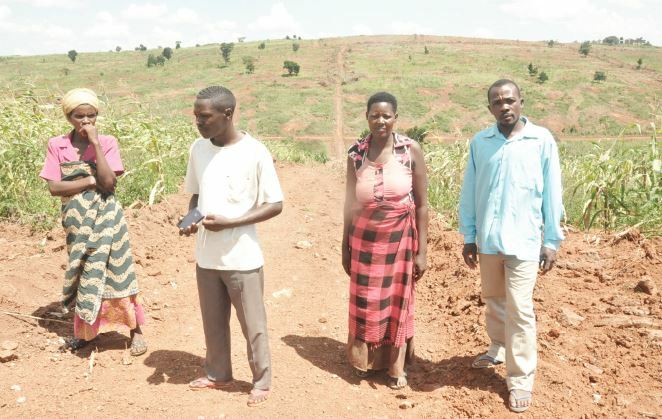 Some of the residents of the affected villages in Kassanda district explaining how the opening up of roads by businessman Abid Alam on the disputed land has affected them. Photo by Luke Kagiri

In August 2019, the State House Anti-Corruption Unit said they were probing the purchase of the land at a cost of sh1.3b for the people who were evicted from Kiboga.

The land was purchased by Kiboga Twegatte Co-operative Society. But it was later discovered that the same land is claimed by Abid Alam.

Over 30,000 people, who were evicted from the Luwunga Central Forest Reserve in Kiboga, settled on the land belonging to Abid Alam at Bukombe in Kassanda, which sparked off a conflict in the area.

The money for the purchase of the land was given to Kiboga Twegatte Co-operative Society Limited by President Yoweri Museveni and Oxfam International in 2013.

In August, Lt Col Edith Nakalema, the head of the State House Anti-Corruption Unit, told the people during a meeting that Abid Alam had offered a part of his land to resettle some of the families evicted from Luwunga Central Forest Reserve that had not been resettled.

The land dispute between Abid Alam and tenants was one of the cases investigated by the Commission of Inquiry into Land Management, headed by Justice Catherine Bamugemereire

Abid Alam was accused of violently evicting people from land measuring about 12 square miles in Mubende. The commission ordered Abid Alam to halt the evictions.

Abid Alam, who is also the proprietor of Mityana Farm Enterprises, told the commission that he paid sh200m for the entire chunk of land. He said he bought the land from Abasi Kajoba Mawanda, a one Kayima, Sam Bitangaro, Andrew Rugasira, a one Dr. Mbonye and the former Resident District Commissioner of Mubende.

Abid Alam said during the time of purchase of the land, they found a few people living on it but did not carry out due diligence to find out if they had any claim on the land.