MENU
Our best golfers over the past decade. But who is No.1?
Previous Story

Our Top Ten Netballers of the Decade. But ...
Next Story

Kirabo Namutebi had another wonderful season locally and internationally. Photos by Michael Nsubuga

Juniors still hold the fort for Uganda swimming with now over 600 swimmers engaged in the sport at different levels.

Dolphins Club and national swimmer Kirabo Namutebi, 14, in particular, continued to prove how far she has come and grown with the sport by again shining out locally and internationally.

She received plaudits from the swimming fraternity and many other Ugandans following her superb performance at the 7th FINA World Swimming Championship that was held in Hungary, in August.

The 14-year-old British School of Uganda, Dolphins Swim Club, and national swimmer did not only achieve personal bests in all her races but set a new national record when she clocked 26.98 in the 50m freestyle race.

She bettered Jamila Lunkuse's time of 27.43 set in 2014 over the same distance by 1.45 seconds as she became Uganda's first swimmer in recent times to win a heat at the World Championships. Kirabo in action for the Dolphins.

Despite her time being 2.27 second shy of USA's Warsh Gretchen who won gold over the distance, Namutebi beat nine other swimmers from different countries in her heat and finished 38th overall out of 102 swimmers who swam that race.

Namutebi had earlier claimed 2gold and 1silver and 2bronze in the CANA Zone IV championship in Namibia in February where Uganda team Captain Avice Meya also bagged 2silver and 1bronze.

During the 13th CANA Junior Swimming Championship in Tunisia, she achieved another milestone when she bagged 2 gold and 1silver to help Uganda finish 4th overall out of 42 countries. That earned her the Real Stars Monthly Sports Award and only lost out on the USPA monthly award to athlete Halima Nakayi who had also grabbed gold in the 800m race at the World Athletics Championship. 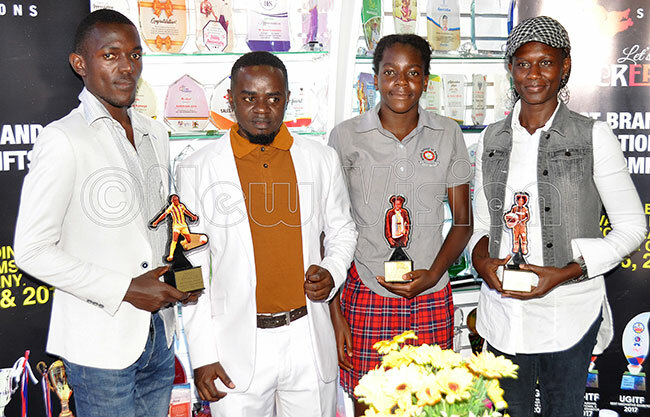 Her brother Tendo Mukalazi also shattered the national 50m breaststroke national record at the FINA Junior World Championships in Korea. Tendo made 32.64 and 29.70 in the 50m breast and backstroke races, which were all personal bests. Atuhaire Ambala, Selina Katumba and Avice Meya were the other members on the team.

At the CANA Zone 3 Swimming Championship held at the Kasarani Aquatic Center in Nairobi, Namutebi was once again unstoppable in the 13-14 years category that she led with 174 points ahead of Kenya's Islam Lubaina (140pts) and South Africa's Adams Keesha (131pts).

Kirabo picked 6 gold and 3 silver and was instrumental in a number of relay races as Ugandan won 53 individual medals overall (14gold, 29sliver,10bronze).

The girls finished third overall on 851 points behind Tanzania and Kenya who won the category with 1,180 points. 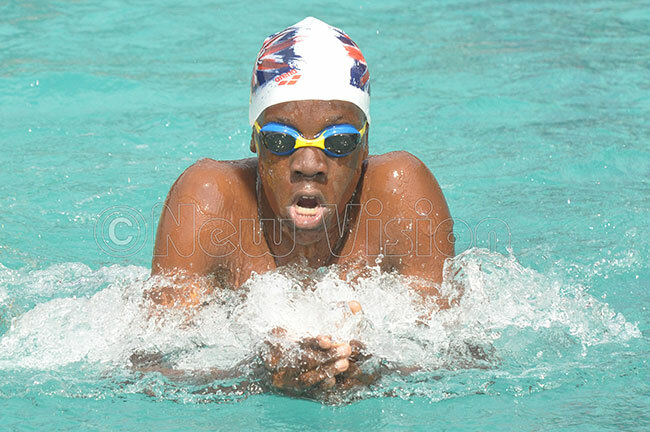 Kabuye made a debut at the worlds in Budapest.

Earlier during the annual Independence Swimming Gala Kirabo won 11 individual gold medals and broke all meet records in her category on top of setting a new 50m freestyle record of 26.90.

The Dolphins Swim Club missed her as they competed in the KSF Long Course Nationals 2019 at the Kenya Swimming Federation Age Group Swimming Championships in Nairobi, in February but they would collect a total of 42 medals (8gold, 18silver and 16bronze) to finish second for the first time in five years.

The Coach Paul Bampata led team produced some golden performances in the three-day event with Pendo Kaumi, Jordan Ssamula, Tendo Kaumi picking gold in the 200m freestyle, 400IM and in the 100m backstroke races, in a time of 2:36.97, 6:45.30 and 1:17.38 respectively in some of the races.

The other Uganda club the Seals was also on top of their game topping the girls' category on 862 points ahead of Bandari and Loreto teams but finishing third overall. 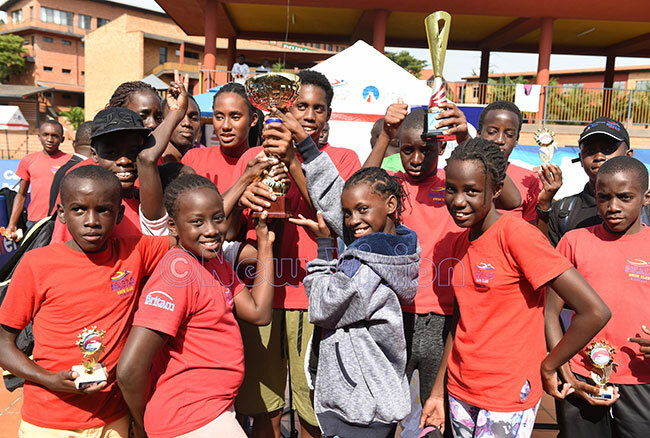 Seals Swim Club swimmers celebrate with their trophies after beating seven other clubs to the Seals Invitational Swimming Gala 2019 at Kampala Parents school.

It was also a first for most of the Seals but the likes of Amelia Mudanye, Alexis Kituuka, Mpeera Yalonda, Neema Kangi, Anthea Mudanye, Natalie Lutalo, and John Kafumbe gave a good account of themselves with some golden performances.

Clubs also continued to develop the sport through the different club events like the Seals League Meets and Invitational, the Dolphins Fast and Furious as well as the Silverfin Pentathlon.

The Dolphins Swim Club swimmers proved dominant throughout the year in the Seals League meets that were held at the Kampala Parents School pool.

The Dolphins topped six of the ten categories with the Seals only getting a top spot in only the boys' 13-14, the girls' 9-10 and 13-14 years categories where John Kafumbe, Mpeera Yalonda, Neema Kangi and Amelia Mudanye excelled. Dolphins swimmers cheer-on their colleagues during a local event.

The Uganda Swimming Federation (USF) also organised two sprint galas in the year where juniors continued to test their speed in the different races.

In the second sprints gala Seals' Amelia Mudanye's time of 1: 23.33 in the 100IM, in the girls 10&Under category remained intact with the winner of the category Kampala Aquatics' Rahmah Nakasule, managing 1: 28.03. Daniel Nuwagaba who won the boys' event in the same category was also slower 60 microseconds slower than his previous time from the same race

In the girls' 13-14 years Namutebi (1:08.90) and Paulsen Ssettumba (equaled their first sprint time while Selina Katumba in the 15&Over made 1:14.95 to edge fast-improving Alexis Kituuka. Amelia Mudanye in action during the Seals League.

Elsewhere, Uganda para swimmer Husnah Kukundakwe's classification classes were confirmed after she competed in the World Para Swimming World Series 2019 in Singapore in May.

Kukundakwe currently competes in the S9 (freestyle, butterfly, and backstroke), SB8 (breaststroke) and SM9 (Individual Medley) which was due for review at the championship.

All these were confirmed at the championship where the 12-year-old managed to collect some points in all the four events although she could not make it to the finals.

She also competed in the World Para-Swimming Championships in London, United Kingdom.
Kukundakwe, 12, was the youngest swimmer at the championship but the weight of the competition and seniority of her colleagues did not stop her from posting personal bests (PB) in the 50m and 100m freestyle events. She made 1:24.85 and  38.14 in the 100m and 50m freestyle races. 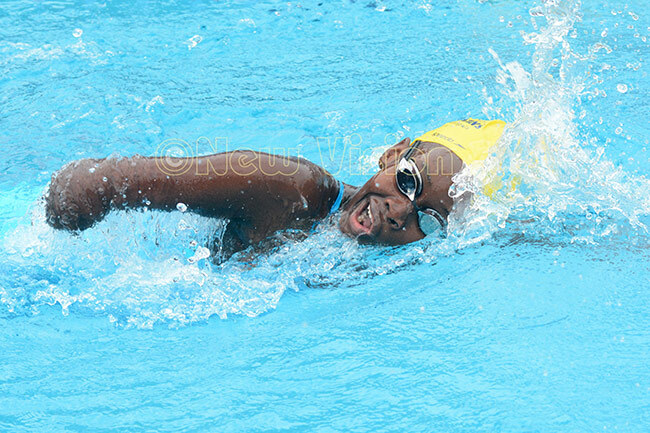 Aga Khan dominated both the girl's and boys' categories to beat the British School of Kampala that finished second overall, by 1216 points.

But despite being beaten to the overall title, the British School produced some of the best individuals of the tournament with national swimmer Kirabo Namutebi, Neema Kangi, Ethan Olowo and Mpeera Yalonda shining for them.

His brother Tendo Mukalazi also weighed in with ten medals; 4 Gold, 4 silver and 2 bronze on top of four meet records and a new national 50m freestyle record of 24.54. The USF has also been keen on developing water polo by organizing a schools league and water polo development clinics in Jinja and Masaka.

They also continued to hold the Masters Championship for retired swimmers and those who swim for fun as a way of keeping them active.

"USF believes that empowered administrators, officials, and coaches are critical if we are to sustainably improve our sport. To this end development clinics were held for coaches and some of our administrators attended sport administration courses run by the Uganda Olympic Committee/ Olympic Solidarity," USF president Don Rukare stated.

"We shall continue to sharpen and hone the skills of our administrators in 2020".

Who are Uganda Martyrs?

Explaining the Martyrs with weird names