Kanda Bongoman joins revellers to usher in...
Next Story

2019 was characterised by many accidents. We bring you a list of some of them

A taxi that was crashed by a lorry. The accident, which occurred at Kira Road traffic lights, left several people injured

2019 was characterised by many accidents. We bring you a list of some of them

TRAGEDIES
JANUARY
JANUARY 3: Musa Matovu, a resident of Luzira and a father of two, was knocked down by a speeding double cabin pickup while riding on his motorcycle at Wampeewo Avenue near Hotel Africana on Jinja road. He was admitted at Mulago Hospital with a fractured leg and injured private parts.
JANUARY 3: Seven people got involved in an accident after a lorry (UAN 533U) they were traveling in overturned at Karuma bridge. Ronald Eyiru from Kamuli district and Hassan Kafeero from Luweero died at the scene. Three of the survivors were rushed to Pope John Hospital Aber, Oyam district. Patrick Segawa, 39, the owner of the truck, sustained minor injuries. 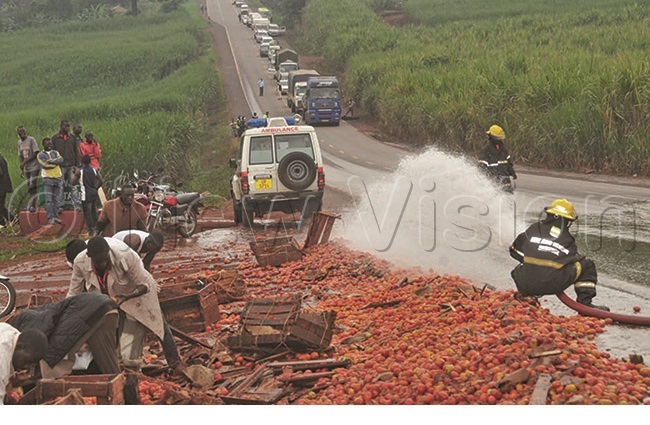 The Fire Brigade crew washing away tomatoes that had spilled on the highway during an accident in Mabira Forest
JANUARY 4: Malcolm Kintu, 3, a son of journalist Robert Mwanje, accidentally swallowed a soda bottle top, which got lodged in his throat and choked him to death. This happened at Kabuuma village in Kibiri, Wakiso district.
JANUARY 9: Andyson Kazibwe, 13, a Primary Six pupil of Dawn Prime Academy, died after drowning in Fort Lugard Hotel's swimming pool in Bulubandi village, Nakigo sub-county in Iganga district.
JANUARY 11: Flora Tibananuka, 86, a resident of Kahunde village in Kagadi district, was found dead in her house after fire from a burning candle allegedly burnt the bed on which she was sleeping.
JANUARY 14: A lorry that was transporting relatives from a funeral in Pader overturned at Rackoko trading centre, killing two bothers, William Okello, in his 60s and Joel Abura, in his 50s. It also left several people seriously injured. The accident resulted from overloading.
JANUARY 15: Seventeen people were confirmed dead following a tragic accident in Pakwach district when a Fuso lorry, number UAV 118S overturned at a black spot known as Got Malara, 2km from Panyimur landing site. Some of the victims were  Hellen Omuturu, 27, Mariam Bediru, Vusaro Katawu and Rita Ayakaka, 38, all from Vurra county in Arua district. Others were Hellen Chandiru, 38, Shafiq Mukutari, Jane Arigabile, a teacher and Avako Lucia, all residents of Ulepi sub-county. 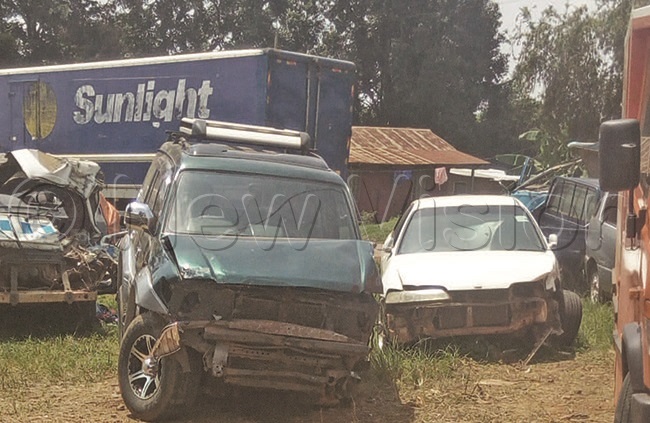 Cars that had been involved in road accidents parked at a Police station
JANUARY 23: Olivia Kiyimba, a resident of Busega and an unidentified toddler were confirmed dead and about 30 others seriously injured in an accident involving five vehicles at Nakirebe on the Kampala-Masaka highway. It occurred when a lorry, number UBA 410Z, which was loaded with merchandise and heading to Kampala, ran into a taxi, number UAV 397P, which was coming from Busega.
JANUARY 23: Two people were knocked dead at Gombe town council in Butambala district by a speeding commuter taxi (UBD 993N), which was heading towards Kampala.
FEBRUARY
FEBRUARY 4: An accident involving a coaster minibus (UBD 343P) and a trailer (T643D) killed four people. The victims were Eric Kasumba, the driver of the coaster; Andrew Natampa, a Police detective attached to Katwe Police station in Kampala; Wilson Sanyu, 42, and Henry Kamoga of Mbale. Several others were also injured in Ssanga near Mabira Forest picnic site, a few metres from Mabira Police Station. The coaster, which was heading to Tororo district with 17 passengers on board, tried to overtake another vehicle in a corner and ended up colliding with the trailer.
FEBRUARY 26: Nine people, identified as Naikanga Kaisuka, 34, Godfrey Tigawalana, 27, Jessica Naigaga, 50, Evelyn Asiyo, 45, Sulaina Namugabo, 56, Muzafaru Ikoba, 39, Sylivia Nkirija, 50, Peter Bukisiba, 2 and Tony Buyinza, 5, all residents of Busei B village in Nakalama sub-county, Iganga district, died instantly, while 12 others were admitted in critical condition when the 30-seater mini-bus they were traveling in collided with a taxi at Wandago trading centre on Jinja-Iganga highway.
FEBRUARY 25: Gertrude Angel Digida, 4, died after a wall collapsed on her during a  heavy downpour at Katwe village in Bugembe town council on the outskirts of the Jinja town. The incident took place at 2:00pm during a downpour that lasted four hours. Digida was pronounced dead on arrival at Jinja Hospital.
MARCH
MARCH 1: Nine people perished in a Hoima Road accident and one was rushed to Hoima Hospital. The accident occurred at Kyejonjo village in Kabwoya sub-county when a truck ferrying bricks from Hoimatown to Kaiso landing site lost control and overturned several times, before plunging down an escarpment.
MARCH 13: Alex Kiwanuka, 34, a resident of Nateete in Rubaga division, Ritah Mbejja, 32, from Bayitaababiri in Entebbe Municipality and Dalton Kitamirike, 7, died in a road accident along the Kampala-Gulu highway that left two Members of Parliament injured.
The MPs were Michael Kabaziguruka of Nakawa Municipality and Norah Bigirwa, the Woman MP Buliisa.
The accident occurred when Kabaziguruka's land cruiser, number UBB 355X, tried to overtake a motorist at a sharp bend, but instead hit an oncoming Toyota Spacio UAV 895G near Best Park Factory in Matugga,wakiso district.
MARCH 28: Annet Odrajoru and her children, Luke Enzama and Dickson Odoma, as well as Fred Mungufeni, 4, were killed when a shear nut tree fell onto a grass-thatched house in Drajini sub-county, Yumbe district.
The incident happened during a heavy downpour, which uprooted the tree. The six people who survived were rushed to Lodonga Health Centre III.
APRIL
April 4: A boat carrying ten people hit a rock and capsized near Nkese Island in Kalangala district. Fishermen rescued five people.
April 26: Philipa Musimenta from Kira, Anthony Kasadha of Kyengera and Jude Ddamulira, as well as 30 others, were injured in an accident and rushed to Mulago Hospital.
The accident happened when a heavy Ford truck UAA497L lost control and rammed into several vehicles at Kira Road Police traffic lights.
April 27: Isaac Kawooya, the Koboko Resident District Commissioner; Hajji Abudallah Muwonge, a resident of Nyamitonga, Mbarara Municipality; Mukaka Maali Naspasie, a Rwandan; Christine Aharizira, 25, a resident of Mutojo in Ntungamo district; Mansoor Ssemanda Abed, 65, a resident of Kakoba, Mbarara municipality and an unidentified five-year-old girl died in an accident at Nakyetema, Mpigi district on the Kampala-Masaka highway.
The accident happened when a trailer from Tanzanian, number T881 DNG, collided with a Toyota Premio UAZ417D. In the process, the two vehicles veered off the road and fell into the Nakyetema wetland. 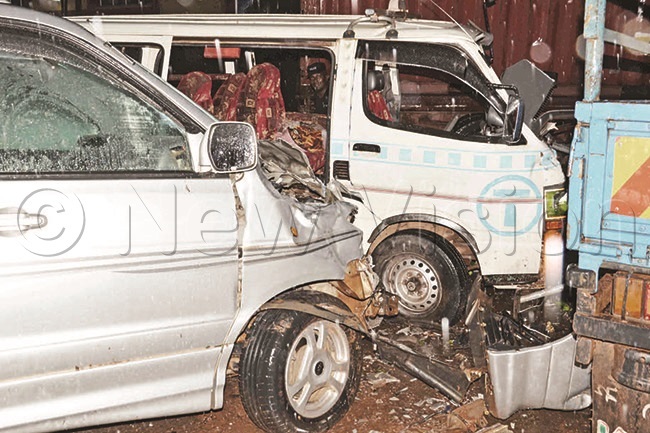 A collision on Jinja Road that left several people injured
MAY
May 14: State minister for water Ronald Kibuule's twins, two-and-a-half-year olds Raiding Wasswa and Roman Kato drowned in the swimming pool as they were playing at the minister's residence in Mbalala, Nama sub-county, on the Kampala-Jinja highway in Mukono district.
MAY 21: A boat carrying 50 people, including footballers and their fans, capsized a few metres after setting off from Fofo landing site in Tonya parish, Buseruka sub-county, Hoima district
on its way to Runga landing site in Kigorobya sub-county.
Over 32 people survived and eight died. The accident was caused by overloading and bad weather, which saw strong winds overturn the boat as it set sail.
JULY
JULY 9: Two Uganda People's Defence Force soldiers, identified as Lance Corporal Simon Peter Ogwang and Sergeant Luka Opila, were killed in an accident at Kakungube on the Kampala-Mubende highway.
AUGUST
AUGUST 22: Four died and a baby survived when a trailer belonging to Seroma Limited, which they were traveling in, collided with a Fuso truck at Luwala along the Jinja-Kampala highway.
AUGUST 20: Twenty-one people died following an accident when a fuel tanker lost control at Kyambura trading centre in Rubirizi district, burning many shops.
SEPTEMBER
SEPTEMBER 6: Two students of Hoima School of Nursing died in a Kibaale accident, while 30 others were injured when a bus number UAS 887W lost control.
SEPTEMBER 12: Seven people died and 11 others were injured in Nakasongola district after a Kitgum-bound Roblyn coaches' bus was involved in an accident. Minister Kibuule's twins drowned in a swimming pool
SEPTEMBER 16: Nine people died, while 63 others sustained injuries when the bus they were traveling in collided with a trailer at Nakawa village in Bugiri district.
NOVEMBER
NOVEMBER 4: Stephen Candia, a veterinary doctor, lost an arm in a road accident. He was travelling with 22 other passengers when a KK bus collided with two other vehicles.
NOVEMBER 5: Ann Kagoya, a 20-year-old Senior Four student, died after being knocked by a car belonging to Bugiri district local government, just after finishing her final exams.
NOVEMBER 6: Seven bodied were retrieved from Lake Albert following an accident in Kagadi district.