Scandals that set many tongues wagging in 2019

2019 was not short of scandals.Here are some of the stories that outraged the nation

2019 was not short of scandals.Here are some of the stories that outraged the nation

FEBRUARY
MISS CURVY CONTEST
Tourism state minister, also the Mityana North MP Godfrey Kiwanda, launched a tourism initiative called Miss Curvy contest. The competition, which was organised  by Ann Mungoma, stirred controversy among women activists, who said it was offensive to women and tainted Uganda's image.
On April 26, the Miss Curvy beauty pageant finally came to an end in a colourful event at the Imperial Royale Hotel in Kampala and Belinda Nansaasi, a businesswoman, was crowned the winner of the controversial contest. 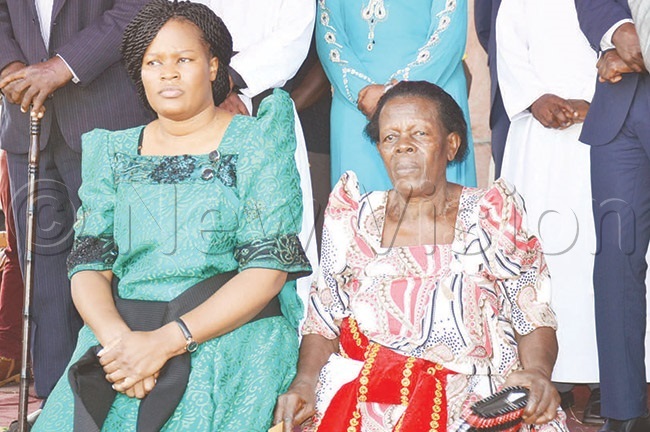 Nantaba and her mother during prayers she organised in Kayunga to thank God for saving her life during the foiled assassination
KYALIGONZA
Uganda's ambassador to Burundi, Maj. Gen. Matayo Kyaligonza was in the eye of the storm over pictures of him confronting a female Police officer while she was on duty.
The pictures and a video clip showed Kyaligonza, who also doubles as the western region National Resistance Movement (NRM) vice-chairperson, together with his bodyguards, clad in military Police uniform, jostling Sgt. Esther Namaganda after she stopped the vehicle in which he was travelling for allegedly flouting traffic rules.
Kyaligonza later raged against the media, accusing them of publishing negative stories about him. He said journalists were blowing the incident out of proportion.
Speaking in Luganda, he warned: "Kankutegeeze, Kyaligonza simuntu wa kuzanyirako (Let me tell you, Kyaligonza is not a person to joke with)." He also stressed the role he played in the NRA bush war. "You must not forget that I contributed to the peace you are enjoying in the country, yet you ridicule me."
MARCH
THREE DIE FROM FOOD POISONING
The death toll of people who fell sick after eating food supplied by the World Food Programme (WFP) rose to three, prompting the Government to tender an immediate apology to the people in Karamoja region.
NANTABA ASSASSINATION ATTEMPT
Security agencies, led by Police, shot dead one of the two men who, for hours, allegedly trailed then state minister for information and communications technology, also Kayunga district Woman Member of Parliament Idah Nantaba. Nantaba was driving from Kayunga to Kampala in the company of her bodyguard attached to the Special Forces Command (SFC) when the incident occurred.
QUALICEL SAGA: MUHANGI SON SUES DRAKE LUBEGA
Lionel Muhangi, son of former rally driver and city businessman Charles Muhangi, asked court to stop businessman Drake Lubega from carrying out developments on the contested land at Qualicel. Lubega embarked on the construction of a modern commercial arcade in the contested Qualicel Bus Terminal in the city centre, days after the Police evicted his rival's group and reinstated him and his business colleague, Mansoor Matovu alias Young. 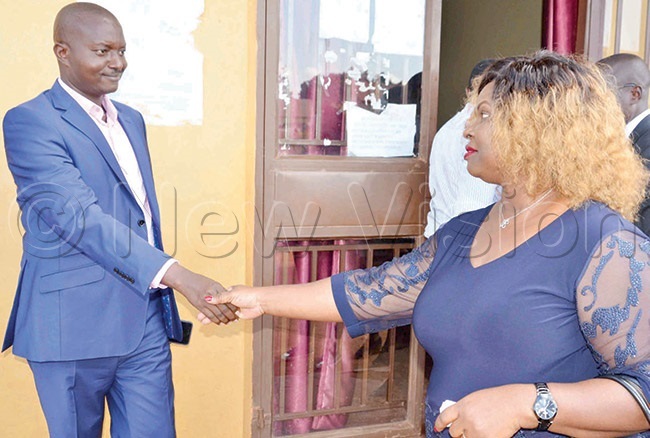 Bugingo greeting Teddy at court in Kajjansi, Entebbe
APRIL
PASTOR BUGINGO DIVORCE SAGA
The country was scandalised when wife to Pastor Aloysius Bugingo said her husband was no longer practising what he preaches.
"We have been married for 29 years and have four children, including a 27-year-old daughter. All was well until 2016, when lights in our blissful marriage started dimming," Pastor Teddy Naluswa Bugingo, wife to Bugingo, narrated.
She said during that year (2016), the once loving husband started getting cold whenever he got home.
"I had no clue until I heard a rumour that he was seeing another woman. But just as the Bible says that wives should submit to their husbands, I continued submitting to him. Things got ugly in 2017, when he started returning home once a week or even not showing up at all," she said.
BOBI WINE SENT TO LUZIRA
Kyadondo East MP Robert Kyagulanyi Ssentamu alias Bobi Wine was arraigned before Buganda Road Chief Magistrate's Court and charged with disobedience of statutory duty relating to his 2018 social media tax demonstration in the city. At about 4:30pm, he appeared before Grade One Magistrate Esther Nahirya, who read out the charges to him. He denied the charges and was sent to Luzira.
MAY
PROF. BUKENYA'S WIFE FILES FOR DIVORCE
After 44 years of marriage to Uganda's former vice-president Prof. Gilbert Balibaseka Bukenya, Dr Margaret Mary Musoke Bukenya set in motion the process to end a union she claimed had left her "emotionally drained, ridiculed, constantly seeking spiritual therapy and living in fear of contracting HIV/AIDS". Margaret named 10 women, including two prominent female musicians, who had allegedly had sexual relations with the former vice-president over the years.
SEXUAL HARASSMENT CLAIM
Samantha Mwesigye, a senior state attorney, accused the Deputy Solicitor General, Christopher Gashirabake of sexually harassing her. Women activists later demanded that Gashirabake should step aside as investigations into the sexual harassment claims against him are instituted.
MPS EAT BIG
MPs once again dipped fingers into the public till. Documents reviewed by Sunday Vision and sources in Parliament, as well as finance ministry indicated that as Parliament passed the sh40.5 trillion 2019/20 budget, the MPs walked away with an allocation of sh102b to cater for their allowances.
JUNE
FANG FANG ROBBERY FOILED
Three soldiers who were arrested in a foiled robbery on Fang Fang Restaurant in Kampala were linked to a Uganda People's Defence Forces (UPDF) top general. Preliminary investigations found that the arrested soldiers were attached to a two-star general (name withheld), who has, for many years, headed a number of elite units. The UPDF later dismissed the reports
TWINS SWITCHED AT BIRTH REUNITE
The power of intuition finally reunited Kenyan twins switched at birth. What started as a casual social media chat changed the lives of Sharon Mitekwa and Melon Lutenyo, as well as Mevies Imbaya. On June 15, DNA results from the Lancet laboratories in Nairobi showed that the Kakamega girls were identical twins.
JULY
ATWINE QUIZZED
Kampala Capital City Authority's (KCCA) physical planning director Moses Atwine failed to explain circumstances under which he landed the lucrative position without the requisite academic qualifications. Whereas the KCCA director physical planning is required to hold a university degree either in urban, physical or regional planning as a foundational course, Atwine has a bachelor of social sciences.
QUACK NURSE
Hundreds of children in seven schools were injected with a fake substance by bogus health fraudsters purporting to be carrying out Hepatitis B vaccination. Police arrested a suspected quack nurse, Hanifah Nakayi alias Anne Bitamazire, who reportedly claimed to be providing cheap ‘school-to-school' medical services to both primary and secondary school children.
AUGUST TUMWINE IN HOT SOUP
Security minister Gen. Elly Tumwine denied accusations of disrespecting the institution of Parliament that he has served over 33 years. He also denied questioning the Speaker's authority.
KAWEMPE BABIES
Some of the newborn babies seen in a picture taken at the Neonatal Care Unit at Kawempe Hospital and circulated on social media were moved to Mulago Specialised Women and Neonatal Hospital. In the picture, the preterm babies, who had been admitted in the Neonatal Intensive Care Unit, were sleeping on plastic chairs and some sharing a single bed. 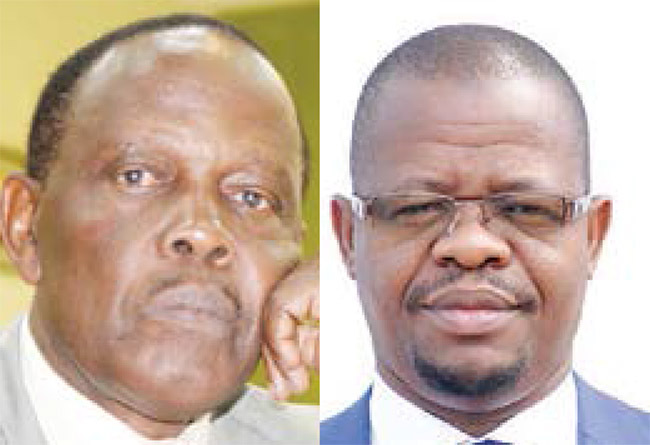 Kyaligonza and Magogo dominated news stories for the wrong reasons
OCTOBER
MAGOGO WORLD CUP TICKET SAGA
Reports showed FUFA president Moses Magogo confessed to reselling World Cup tickets. He was fined about sh36m. Magogo was also suspended from taking part in any football-related activity at the national and international level for two months.
Later on, two lawyers, Julius Kavuma Kabenge and Friday Roberts Kagoro, wrote to the Auditor General, John Muwanga, requesting him to carry out an audit into the activities of the Federation of Uganda Football Association (FUFA) and its embattled president, Moses Magogo.
KAJURA'S HOME AT STAKE
The ancestral land and country home of former deputy premier and banker, Mzee Henry Kajura, was claimed by businessman Abdu Ssali, saying he bought it. The palatial home and land, measuring over 50 acres, is located at Nyakafunjo village in Kitoba sub-county, about 11km from Hoima town. The place also includes the family cemetery.
Kajura's wife, Regina, insisted the family borrowed sh341m in instalments from Ssali, for which they paid him over sh900m with interest. She said the family was shocked that Ssali turned around to claim they sold the property to him and refused to hand over the land title for the property they gave him as collateral. The Kajura family took the matter to the Police, where they filed a criminal case against the purported moneylender.
NOVEMBER
TRAFFICKERS ARRESTED
The Police arrested seven people, including two Chinese nationals, suspected of smuggling Ugandan women to China to work as surrogate mothers. The women, who allegedly include teenage girls, are promised between sh20m and sh45m if they sign the deal.
On November 15, it was reported that the Ugandan women smuggled to China as surrogate mothers carry three to four babies at a go and are kept in isolated rooms for seven months before the babies are removed, fresh details showed. The preterm babies are then kept in incubators as their mothers are moved to another facility, where they are kept for three months as they recuperate. Shockingly, the mothers would be asked to carry other babies after three months have elapsed.
THEFT OF DRUGS
The Police in Kampala held a man described as the ‘kingpin' in connection with the theft of drugs from government health facilities and pharmacies. The man, identified as Peter Mugisha alias Herbert Mundere, had eluded arrest for over six months, according to the National Drugs Authority's board chairperson, Dr Medard Bitekyerezo.
MONSTER DIRECTOR
Students of Wamala Mixed Secondary School in Mpambire, Mpigi district revealed harrowing tales of how their school director, Assad Wamala, subjected them to rape and defilement. President Yoweri Museveni intervened later and instituted a probe after Wamala was released on bail by the Mpigi magistrate, Maureen Mukayo. In court,  Wamala had been charged with indecent assault and not defilement.