MENU
Scandals that set many tongues wagging in 2019
Previous Story

A number of prominent personalities have died this year, alongside other gruesome deaths. Below are a highlight of those that have made news

Godfrey Kaaya Kavuma:The businessman, who set Mengo on an upward economic path and played a fundamental role in the restoration and modern-day transformation of Buganda kingdom died at the age of 82 on July 27 from kidney failure at the International Hospital Kampala

A number of prominent personalities have died this year, alongside other gruesome deaths. Below are a highlight of those that have made news

JANUARY
ALTON KABALI
Kabali, a two-year-old boy, was strangled and his body dumped in a neighbour's septic tank on the eve of his birthday. This was in Bunamwaya, Rubaga division, Kampala
ENG. HENRY WASSANYI SERUNKENYA
Serunkenya was a music composer. His compositions dominated the 1960s, 70s and 80s. He was laid to rest in Mukono district. 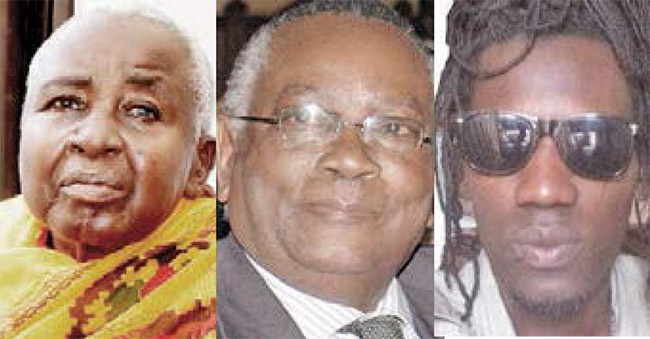 Rwenzururu queen mother, Justice John Tsekooko and Ziggy Wine
UGANDAN COUPLE
Joshua Mutaasa, 33, and Rita Nalwanga, 35, a Ugandan couple was burnt inside their residence in South Africa.
STELLA NANYONJO NJUBA
Njuba was a daughter of the late Njuba Guma, a bush war veteran. President Yoweri Museveni described her as an unsung young heroine, who played a critical role during the five-year bush war that brought the National Resistance Movement to power.
COMMISSIONER JOSEPHINE KAKOOZA
Kakooza was the director of the Uganda Police Force band. She was 64 years old and had served the Police for five decades.
ALICE MAGEZI BAZEYO
Bazeyo was the wife of Prof. William Bazeyo, a renowned Makerere University don.
FEBRUARY
MZEE HEZRON KAKUYO, 93
Kakuyo, a resident of Ankole in Kiruhura district, was laid to rest on February 23. He was the father of Uganda National Roads Authority executive director Allen Kagina, Makerere University Council chairperson Lorna Magara and Jocelyn Kyobutungi Rugunda, the wife of Prime Minister Ruhankana Rugunda, among others.
JULIUS SHUWU, 34,
Shuwu, the MTN telecom supervisor for SIM card registration, was stabbed to death at Kyebando-Kisalosalo in Kawempe division, Kampala.
FOUR MINORS DIED
The minors died when they got trapped inside a burning one-roomed house in Kakajjo zone, Kisenyi1 in Kampala central division.
AKECH AND SSEMPEREZA KILLED
Margaret Akech, 3, went missing, was murdered and her body was dumped in a trench in Kasokoso, Kampala, while the body of Johnson Ssempereza, 6, who disappeared, was found inside a tomato box in Kireka market. 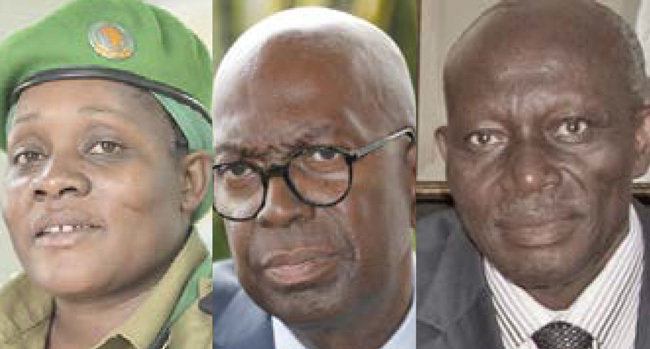 Christine Alalo, Robert (Bob) Collymore and Prof. William Isharaza
EVANS AKAMPURIRA, 7 AND mOSES MUSIMENTA, 5
Both residents of Lusanja in Wakiso district met their deaths when they fell into an abandoned pit-latrine and drowned while playing after school.
EBOLA EXPERTS BURY SUSPECTED VICTIM
James Onyango, 49, who was working in DR Congo for eight years as a mason, died at Bunia Hospital after being hospitalised for three months.
MARCH
NATE SAGAL, 68, AND CHARLES LOGIT, 58
The two were found dead after eating food supplied by the World Health Programme in Amudat and Napak district.
NICHOLAS MUYINGO, 10 AND PEACE NALWEYISO, 12
The infants, who lived with their grandmother, Rosemary Nakintu, in Kalagala village, were killed and their bodies dumped in a forest with missing body parts.
RONNIE WONDER, 47
A tax consultant died after donating blood.
FIVE KILLED
Five children from one family were killed in Bufunjo sub-county Kyenjojo district by unknown assailants.
PROF. WILLIAM ISHARAZA, 67
The former professor of biochemistry at Mbarara University of Science and Technology (MUST) succumbed to cancer.
ELIZABETH MUKARURWIZA, 35
A Rwandan pregnant woman died while crossing into Uganda to buy food through an ungazetted entry point at a place called Mugitari.
AMBASSADOR JULIUS ONEN
The trade ministry permanent secretary, as well as Uganda Revenue Authority board member, died.
CHRISTINE ALALO
A Police commissioner attached to AMISOM perished in the Ethiopian Airlines plane crash from Addis Ababa to Nairobi on March 10, killing 157 people.
APRIL
JOYCE KITEFUNGA RUGAZOORA
She was a Lay Canon of the church of Uganda.
HAJJI SIRAJI LYAVAlA, 57
The former LC5 chairperson of Bugiri district died at Norvick Hospital, Kampala.
MAY
RAIDING WASSWA AND ROMAN KATO
The sons of state minister for water, Ronald Kibuule, drowned in a swimming pool at their home. 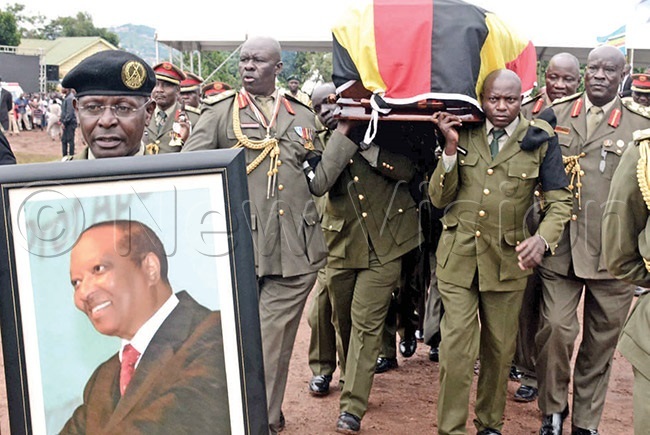 UPDF officers carrying the casket bearing the body of Prof. Apolo Nsibambi to the burial ground in Kasero, Buloba in Wakiso district
PROF. APOLO NSIBAMBI
May 28: Nsibambi passed away at his home in Bulange, Mengo,  Rubaga division, Kampala. The 78-year-old had battled cancer of the bones and diabetes for several years.
May 30: Nsibambi chose his daughter, Rhoda Nakimuli Kasujja, as heir. Among the Baganda, it is not common for a girl to be an heir to her father's property. However, close friends and family said they were comfortable with the arrangement.
June 4: Nsibambi was buried at Buloba. He was sent off with a 17-gun salute.
June 7: A row erupted over Nsibambi's heir, when the head of Ffumbe clan, Yusuf Mbirozankya Walusimbi, protested Nsibambi's choice and the complicity of the Church in the issue. Walusimbi said the decision contradicts the kiganda cultural norms.
June 12: Bishop William Ssebaggala, who presided over the funeral service of Nsibambi and prayed for the deceased's daughter as the heir, contrary to Buganda cultural norms, defended both the family and Church on the issue.
JUNE
RWENZORI QUEEN MOTHER DIES
Rwenzuru queen mother, Biira Christine Mukirana died.
JULY
SAFARICOM CHIEF
July 1: Robert (Bob) Collymore, the chief executive officer of East Africa's largest mobile operator, Safaricom, died after a two-year battle with cancer.
AUGUST
MZEE YOHANA AHULUMA
Believed to be the oldest man in Uganda, Ahuluma died at 140 years of age.
JONN SSENSEKO KULUBYA
Kulubya was a politician and businessman, billed as one of Uganda's richest moguls. He died aged 85.
MARY LUWUM
Luwum was the widow of the late archbishop Janani Luwum of the Church of Uganda.
ENG. MILTON TUTAREEBA
Tutareeba was an employee of Uganda National Roads Authority and manager of KDB Kyerenga wines. He was murdered and his body dumped in Namagoma, off Kampala-Masaka road.
ZIGGY WINE
Michael Alinda alias Ziggy Wine was a musician attached to the Firebase label. He died from the injuries he sustained after a motorbike accident. 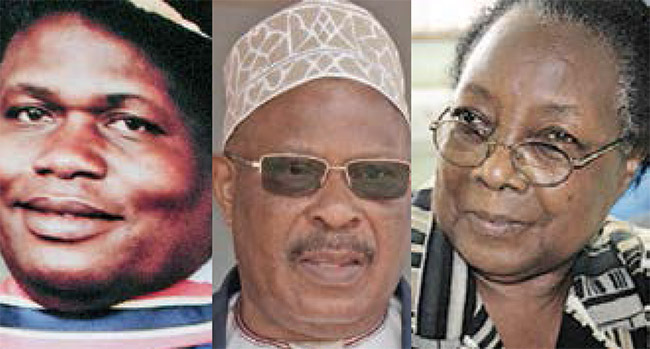 Dr Joseph Jjumba, Medi Kaggwa and Mary Theresa Kakoma
DR JOSEPH JJUMBA
Jjumba was the director of YMCA (Young Men's Christian Fellowship campus, located in Wandegeya, Kampala.
SEPTEMBER
JOSHUA NTEIREHO AND MERINA TUMUKUNDE
The two were shot dead along Entebbe Expressway. Merina was the wife of Mark Rugyenza, a businessman in Kampala.
MARY THERESA KAKOMA
Kakoma was the wife of the late George William Kakoma, who was the composer of the national anthem.
MARIA NAGIRINYA
Nagirinya was a social worker, who was kidnapped and murdered together with her driver Ronald Kitayimbwa.
ALFRED KAROKORA
Karokora was the Supreme Court judge who served as a judge for 10 years, from 1996-2006.
JOSEPH BOSSA
The former legal director of Bank of Uganda died in The Hague, Netherlands.
OCTOBER
Justice John Wilson Tsekooko, 75
The retired Supreme Court Justice died on October 14. 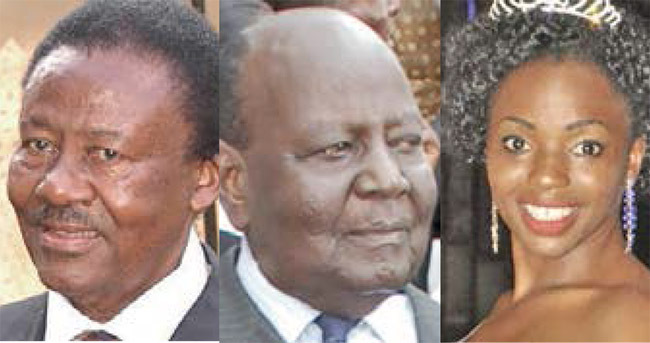 Justice Alfred Karokora, John Ssenseko Kulubya and Maria Nagirinya
BISHOP OTIM MELCHIZEDEK
The retired Anglican Bishop died on October 9. At the time of his retirement, he was the dean of the province of the Church of Uganda.
JOSEPH BOSSA
He was a Uganda People's Congress (UPC) stalwart. At the time of his death, Bossa was serving as the UPC splinter group president (Olara Otunnu faction).
MARIA NAITA
She was the lead artist of the Commonwealth Heads of Government Meeting (CHOGM) stride Monument.
PETER KIBIRANGO
The lawyer was beaten to death by a mob in Mutungo, a city suburb. He was mistaken for a phone thief.
NOVEMBER
MEDI KAGGWA
He was the chairperson of the Uganda Humans rights commission. He collapsed and died on November 20.

How to detect sickle cell