The Pope commended the cardinal for giving his life to serving the Church and prayed that God continues to keep him in good health, love and that He strengthens his faith.

The Pope commended the cardinal for giving his life to serving the Church and prayed that God continues to keep him in good health, love and that He strengthens his faith.

Emmanuel Cardinal Wamala, the retired Archbishop of Kampala, celebrated his silver jubilee as a cardinal on Saturday at Pope Paul VI Memorial Hotel in Kampala.
Twenty-five years ago, Pope St. John Paul II elevated the then Kampala Archbishop Wamala to the College of Cardinals. On this special occasion, Catholics, non-Catholics and the Archdiocese of Kampala congratulate Cardinal Wamala and thank God for the gift of their shepherd emeritus.
Pope Francis also sent a cordial special blessing to the Cardinal for the celebration. The Pope's message was delivered at the function by his representative, Archbishop Luigi Bianco, who said the Pope is pleased with the Cardinal's noble mission.
"On the occasion of the 25th anniversary of your elevation to the college of Cardinals, I send you warmest congratulations and the assurance of my spiritual closeness. I join you in thanksgiving to God the Father, source of all good, for the abundant blessings bestowed upon your life," the Pope's message read. 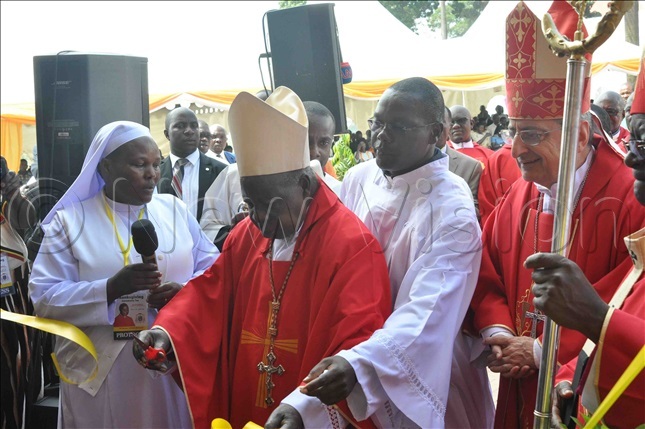 Emmanuel Cardinal Wamala cuts a tape to open the Cardinal Wamala Complex as Bianco and Kizito Lwanga look on
The Pope commended the cardinal for giving his life to serving the Church and prayed that God continues to keep him in good health, love and that He strengthens his faith.
The celebrations were graced by the chairperson of the Episcopal Conference, Bishop Joseph Anthony Zziwa, Archbishop of Tororo Emmanuel Obbo and the secretary of the Episcopal conference, Msgr John Baptist Kauta. Also present were Kampala Archdiocese Vicars Msgr Charles Kasibante, Msgr Lawrence Ssemusu, Msgr John Baptist Ssebayigga and Msgr John Wynand Katende, chancellor Fr Dr Pius Male, Pastoral co-ordinator Fr Dr Mark Ssajjabbi and several priests and religious.
The Mass, which was held at the same venue, was attended by the deputy governor of Bank of Uganda, Louis Kasekende, Centenary Bank managing director, Fabian Kasi, Lord Mayor, Erias Lukwago, Kira Mayor Julius Mutebi, Buganda Minister of Sports Henry Ssekabembe, Cipla managing director Emmanuel Katongole, former Buganda minister Mahmood Thobani, Sheikh Ssemmambo, who represented Mufti Mubajje and hundreds of Christians.
Wamala retired as archbishop of Kampala 13 years ago (2006) after he made 75 years of age as stated by the Catholic Church Canon Laws. He was succeeded by Archbishop Kizito Lwanga.
During the function, Wamala commissioned a building named Cardinal Wamala Complex, which is just outside Pope Paul VI Hotel. 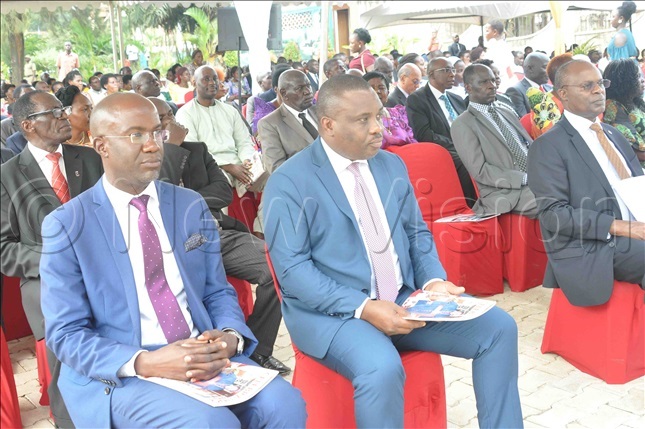 Lukwago (centre) was among the guests that attended the function
Lwanga applauded Wamala for dedicating himself to serving the church and the country at large.
"You have been a blessing to the Catholic Church in Uganda, we pray that God continues to strengthen you," he said.
"Celebrating 93 years of age is not easy, but Cardinal Wamala is 93 years. He spent 62 years as a priest, 38 years as a bishop and 25 years as a cardinal. His family is lucky to have three religious leaders; Brother Eden, Msgr Kyabukasa who teaches at Bukalasa Seminary and Cardinal Wamala. We praise and thank God for Cardinal Wamala - a man of faith and a teacher, who has taught me many things that helped me in my journey as a leader," Lwanga added.
He said, indeed, these landmarks are a big cause for celebration and thanking God for the life that has touched so many.
"Cardinal Wamala has exhibited an extraordinary character, distinguished by humility, simplicity, diligence, and wisdom.
"His pastoral zeal and wise admonitions have benefited not only Catholics, but also people of different religious denominations, statuses and nations. You have taught us that difficulties are just challenges that should be dealt with, you exhibited admirable courage endurance and prudence in handling situations," Lwanga said.
Meanwhile, Msgr Kyabukasa thanked Archbishop Lwanga for allowing his brother the Cardinal to stay in his archdiocese ever since his retirement 13 years ago.
"I also thank Msgr Kasibante for making room for the cardinal in his house at Nsambya in Kampala," he added.