Museveni said he had held discussions with Kenya’s president Uhuru Kenyatta and Tanzania’s John Magufuli about the possibility of taking Uganda’s sugar at a cheaper price.

Museveni said he had held discussions with Kenya’s president Uhuru Kenyatta and Tanzania’s John Magufuli about the possibility of taking Uganda’s sugar at a cheaper price.

SUGARCANE GROWING        MARKET
By John Tugume
President Yoweri Museveni has allayed fears among sugarcane farmers in
Busoga region over lack of market for their produce.
He met the farmers and other regional leaders at Jinja State
Lodge recently, where he told them that he had discussed the
issue of market for sugar with East African leaders.
Museveni said he had held discussions with Kenya's president Uhuru Kenyatta and
Tanzania's John Magufuli about the possibility of taking Uganda's sugar
at a cheaper price.
The President also emphasised that farmers should not worry about
market for their sugarcane because there were other options.
He, for instance, said he had talked to the Speaker of Parliament,
Rebecca Kadaga, about the possibility of setting up mills, which would
process sugarcane into other products, such as fuel, sanitary pads,
paper and syrup.
"I have figures for sugar imports of Uganda - 76 million kilogrammes of
sugar worth $41m. So, you wonder if you have got so much sugar, why are
we importing sugar? I was suspecting that this sugar is special sugar
for use by beverage companies," the President said.
"We need to refine our sugar to the standard of being used by beverage
companies that make soda," he added. 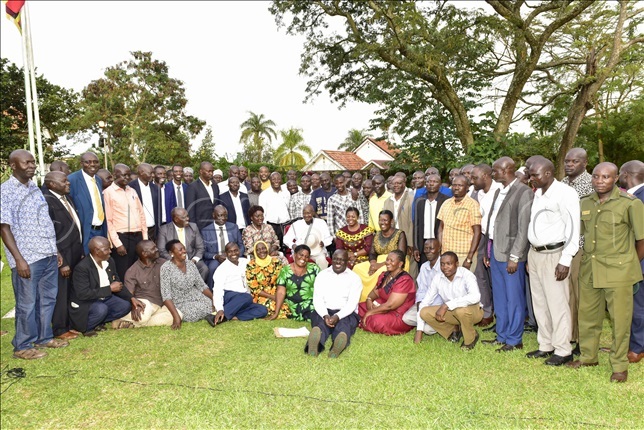 Museveni with leaders of sugarcane growers in Busoga region during a meeting at Jinja State Lounge
"The future of sugarcane is bright. Sugarcane farmers should not
panic. They should not worry about market for the cane," Museveni
said, adding that there were plans to process sugarcane into juice.
The President castigated the practice of smallholder farmers using
their small pieces of land to grow sugarcane, a practice he said gives rise
to poverty.
He also said those who lease out their small portions of land would
rather use it for other forms of agriculture.
The President promised to meet such farmers in the future to discuss the
best land usage practices.
Museveni's meeting came months after he rejected signing the
Sugar Bill 2016 into law over failure to allow zoning.
Zoning means a sugar factory will be kilometres away from the other.
There are several sugar factories in Busoga, such as Kakira Sugar
Limited, Sugar and Allied Industries Limited in Kaliro, Kamuli
Sugar, Mayuge Sugar, as well as GM sugar in Njeru and Sugar Corporation
of Uganda Limited at Lugazi in neighbouring Buikwe district.
In the Bill, the Government had proposed a zone of 25km between mills,
with no more than one mill in that zone and out-growers in that area
only supplying sugarcane to the mill.
The Sugar Bill seeks to provide for the development, regulation and
promotion of the sugar industry.
However, the MPs removed the zoning bit before passing the Bill.
However, Museveni said he was not happy with the MPs for passing the Bill
without considering the interests of the big sugar manufacturers.
According to the Busoga Sugarcane Out growers' Association chairperson,
Issa Budhugo, out growers are spread all over the sub-region, but with
majority in Jinja, Mayuge, Luuka, Iganga, Kamuli, Kaliro and Bugiri
districts.
"The price of sugarcane ranges between sh95,000 and sh110,000 per tonne
at the different factories," Budhugo said.
Earlier, a tonne had risen up to sh175,000.
Mid this year, out growers under their association had secured
permission to sell their canes to a factory in western Kenya, but many
pulled out after encountering a number of hurdles, including being arrested by Kenyan authorities.

Arua private schools not yet inspected