Museveni passes out over 6000 LDUs
Next Story

Over the weekends, they serve them with nutritious porridge and other foods. They have also opened up a library to enable them to revise during holidays.

Children of Acholi Quarters in Banda slum area celebrate christmas with Shanta Partel and her team from Apar Foundation. Photos by Agnes Nantambi

Over the weekends, they serve them with nutritious porridge and other foods. They have also opened up a library to enable them to revise during holidays.

Kampala - Parents of Acholi Quarters in the slum areas of Banda have been warned against leaving their children to loiter. They were advised to engaging them in productive work.


The warning was issued by Joseph Bagiire the vice-chairman Banda Zone B who is also in charge of children's affairs in the area.

Speaking during the children's Christmas Party organised by Apar Foundation in Acholi Quarters, Bagiire said his community is over congested with holidaymakers.

However, with the help of Apar Foundation children's welfare has been improved.

Over the weekends, children are served on porridge and other foods. They have also opened up a library to enable them to revise during holidays. 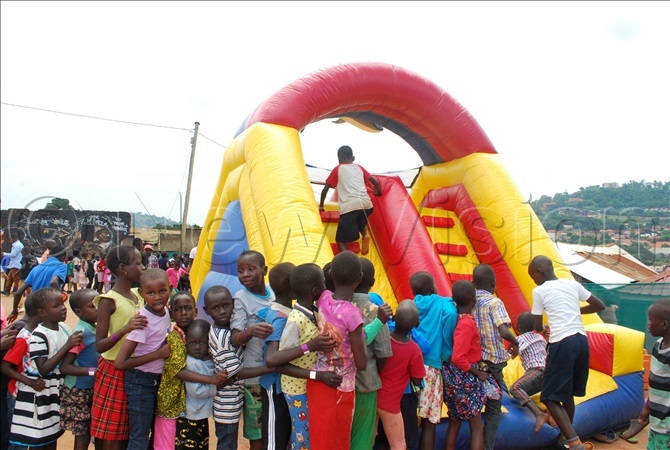 This he said has helped them develop a reading culture which has kept them from engaging in dubious activities like stealing and taking drugs.

He applauded different organisations for sensitising locals on family planning, saying many have considered reducing the number of children to have.

Shanta Pater, the Director Apar Foundation said the foundation decided to adopt the Acholi quarters community to improve their welfare.

"We did a health camp in this area after establishing that a number of children were malnourished.

We then did a survey where we discovered that a working mother of five children cannot feed all her children with what she earns.

So we decided to feed these children on porridge mixed with milk and a piece of bread which is a full meal for a child. 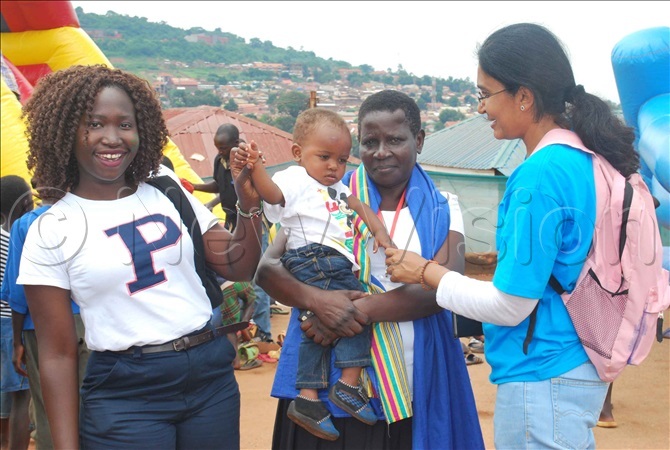 Shantel on the left greeting one of the kids whose mother was pleading to be included in the program to receive free nutritious feeding.

Since we started, every Sunday we feed 500 children registered under the foundation, "she explained.

She added, the feeding program has improved on the children's health and behavior because before they were aggressive but they are now orderly and patient.

Shanta revealed that they have also trained the children in leadership skills and they can monitor fellow children and report any case of health problems for medication.

During the party, mothers were given a number of items like foodstuffs, blankets among others.

Patel said the foundation is trying to sensitize the mothers on family planning to help them produce children they can manage.

She said the foundation is trying to adopt a school and a health centre in the area to ease access to health and education services.

One of the beneficiaries of Apar Foundation Betty Nalubwama said her child is accessing free education which has helped her a great deal.

"My child was a fees defaulter but now her school dues are cleared in time, "she said

COU cuts links with US Church