Sensational midfielder Bright Anukani scored one and made an assist as Uganda Cranes outwitted Eritrea 3-0 to claim the CECAFA Senior Challenge Cup for the 15th time.

The U-20 Cranes midfielder who also stars for league side Proline Football Club in the Uganda Premier opened up Uganda's scoring in the 32nd minute after a good pass from Allan Okello.

The midfield gem on a number of occasions fed forward Fahad Bayo but was locked out by a strong Eritrean defense. In the 68th minute, Anukani set up Mustafa Kizza for Uganda's second after good work out from Karim Watambala.

Bright Anukani celebrates his opener against Eritrea during the finals of the CECAFA Senior Challenge Cup at Lugogo. Cranes won 3-0.

Before Bright Anukani broke the deadlock in the 32nd minute, Uganda was chasing shadows with Eritrea bossing the midfield with clinical one-touch football and only let down by poor finishing.

The Cranes stepped up in the second half putting the match to bed with a Joel Madondo effort soon after coming on for Bayo. Another sub, Ben Ocen set up Madondo, to score his first for the Cranes.

Uganda continued to press for more but Eritrea also could not allow being humiliated in front of a big passionate fan base that stormed Lugogo to support them.

Captain Robel Teklemichael who emerged the tournament MVP of the tournament commanded his defense well to deny Cranes strikers from causing further damage.

The victory meant that Coach Jonathan McKinstry's won his first silverware for the Cranes since his appointment in October this year when he replaced French man Sebastian Desabre.

McKinstry atoned for his loss to Uganda in 2015 final when as Rwanda coach he lost 1-0 in the final held in Addis Ababa. 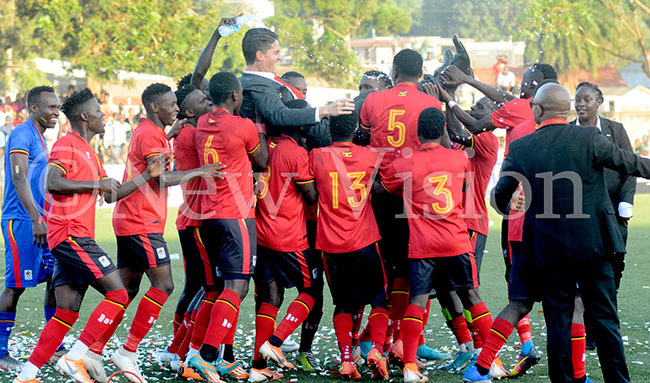 McKinstry thanked his players for standing to the challenge to defend the good run the country has had of winning the tournament every time it has hosted since 2000.

"The boys have really been amazing throughout the tournament; they have played six games in 12 days and managed to win all of them. So I am very pleased with the performance especially against a stubborn Eritrean team," McKinstry appreciated.

Minister of State for Primary Education Rosemary Sseninde, FUFA president Moses Magogo and a number of CECAFA dignitaries crowned the champions and other outstanding players of the tournament.