You can get a passport in hours

With the new online electronic passport application process, people will get there passports within 48 hours (2 working days)

With the new online electronic passport application process, people will get there passports within 48 hours (2 working days)

This sounds a miracle to Ugandans who have applied for passports before.

"I had a friend who took long to get a passport but I got it in four-hour record time using the online method," Komesi said.

Komesi said he applied for the passport yesterday morning, and took his original national ID, a recommendation from Kichwa Primary School headteacher, Nuru Sere, and payment slip to the passport office, which verified them and granted him a passport.

Those who applied and got passports over 10 years ago would endure waiting for a month or more to have the passport.

Initially, applicants obtained and filled forms, attached photographs and associated documents, looked for the signature of the recommender, and finally, present the file to the immigration officer for manual processing.

However, with the new online electronic passport application process, people will get their passports within 48 hours (2 working days).

This was after the launch of the new online e-Passport application process which was introduced by the Ministry of Internal Affairs.

A passport is an official document issued by a government, certifying the holder's identity and citizenship and entitling them to travel under its protection to and from foreign countries.

The ministry's state minister, Mario Obiga Kania said all applicants who paid manually should ensure that their applications are submitted to the Passport Control Office by December 31, when it will be phased out.

Kania said the manual procedure has been a long and tedious process prone to delay, manipulation and a source of great temptation to staff and the public for corrupt tendencies. 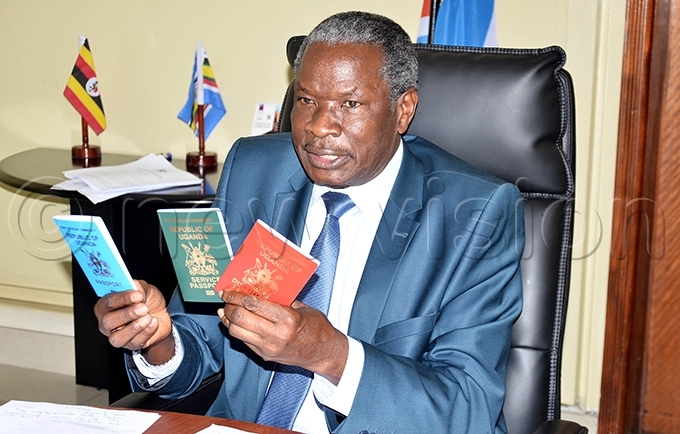 "The new e-passport procedure reduces on the processing time of the passport and congestion seen at the passport office as the system enables scheduling," he said.

The minister said the procedure eliminates chances of foreigners obtaining Uganda passports as it has thorough check and interaction with other government agencies relevant to applicant verification.

He also said it eases payment processes, which is done through mobile money, Pay ways, and all types of visa cards.

Kania said the ministry has heard many unfortunate stories of people who try to go through middlemen/brokers who con them of their hard-earned money.

"With the new development, you do not need a middleman or an agent to access this facility. Go online, make the application, pay and finally come with your details and you will be served and if you need assistance, go directly to our nearest offices, he advised.

The minister added: "if for whatever reason, anybody asks you for money at the immigration office, please take the identity of that person and report him to the authorities. We are here to serve with honour and integrity."

The ministry's permanent secretary, Benon Mutambi said they are replacing old passports with new ones to enhance security features of the travel documents, so that Ugandans do not get problems of their documents being tempered with and ending in wrong hands.

"Security is paramount and we came up with the new features of travel documents for easy travel through the World," he said.

On January 15, next year, the government will also roll out the East African electronic passport, to replace the current passports, in line with the directive by the East African Community (EAC) heads of state.

According to the commissioner citizenship and passport control Brig. Johnson Namanya, the new passports have a chip, which has an applicant's personal data.

To apply online for an e-passport, one needs to log on to www.passports.go.ug and accept the terms of the service, choose the type of the service, and fill in the passport application form.

Thereafter, you choose the mode of payment, print out the application identity card with the payment registration number (PRN) and go ahead and pay using the payment mode of your choice cash (over the counter), mobile money, EFT, Pay way and all types of visa cards.

After payment, access your account and schedule an appointment on the convenient date for your interview at the passport office.

The Directorate of Citizenship and Migration Control (DCIC), which issues passports, has been hit with several corruption scandals over time.