Minister Adoa celebrates with the district leaders and her supporters in her village in Kakus, Serere district on Monday. Photo by Emmanuel Alomu

The Serere District Woman Member of Parliament, now the newly appointed state minister for fisheries, Hellen Adoa Abeku was Monday warmly welcomed by thousands of her supporters at her home in Kaku village, Olio Sub County.
After the news of her appointment broke out on Saturday, Adoa's supporters camped at all her four homes in Serere celebrating her appointment until Monday. They contributed their resources and organized a welcoming party at her home in Kaku village on Monday.
Patrick Okwanga, a supporter commended President Yoweri Museveni for giving them the first minister in the district since Serere was carved from Soroti district on July 1st, 2010. 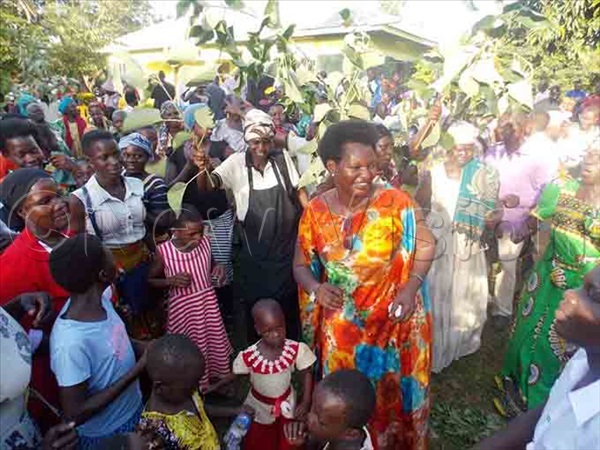 Adoa's supporters camped at all her four homes in Serere celebrating her appointment until Monday. Photo by Emmanuel Alomu

John Stephen Otaala expects the beating of fishermen by the UPDF fisheries Protection Unit to end in Lake Kyoga now that the minister is in place.

Denis Abeku who has been married to Adoa for the last 13 years described his wife as a truthful person and warned their supporters against faking statements aimed at tarnishing her name.
Michael Olobo, the Serere District National Resistance Movement chairperson said the ministry is very difficult and strategic for the transformation and social-economic development of the country, which calls for a lot of input, mobilization, energy, and wisdom from the Lord.
The priest Kidetok catholic parish, Rev. Fr. John Paul Aisu said the minister is a star given by God because of her contributions to the church and should be handled like an egg.
Aisu reminded her of the recent words of the Soroti Catholic Diocese Bishop, Joseph Eciru Oliach who said God was going to elevate the three MPs of Teso; Adoa (Woman MP Serere), Anita Among (Woman MP Bukedea) and Elijah Okupa (Kasilo County MP). 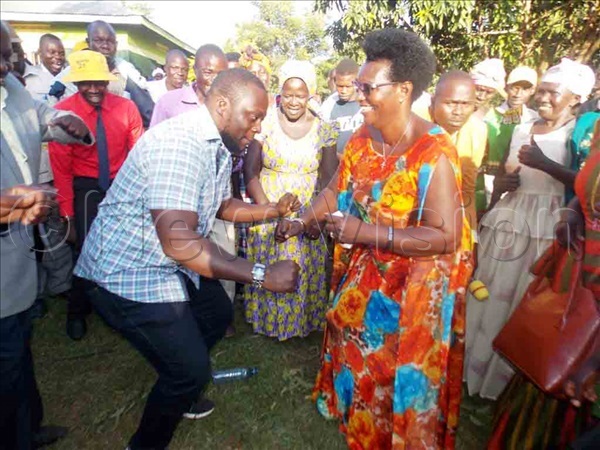 Adoa dancing with an official from NRM Secretariat to celebrate the appointment as minister on Monday. Photo by Emmanuel Alomu

Aisu urged Christians to step up efforts to pray for Adoa because some of her opponents will now take this advantage to oppose her.

Rev. David Epongu Opio, the Serere Anglican archdeacon who led the prayers said the calling of Adoa's service is beyond politics adding that people should be grateful that God has started answering their prayers.

He said Adoa has been anointed a minister at a time Teso is breaking down-culture is breaking, Iteso are disunited and beggars are increasing,  and politically,  people are fatigued, tired, aggressive and disturbed over many things.

Epongu said its time to preach the Good News to the poor and oppressed and to sensitize the fishermen on the advantages of protecting the lakes from illegal fishing.


"Work as a team, consult your people, work as an advocate for Teso and even to the president," he asked Adoa. He added that God is rewarding Adoa for her faithfulness.

Serere Resident District Commissioner, Geoffrey Okiswa was disappointed that the UPDF fisheries unit had delayed deploying soldiers in Lake Kyoga Serere's side to clean up illegal fishing and this he said has brought a lot of anxiety in the district.
As he asked the minister to speed up the process of deployment, Okiswa wants the motorcycles and vehicles confiscated for carrying illegal fish to be kept in Serere not Masese in Jinja.
Adoa said she will work with the technical team to protect the lakes and also share with different stakeholders to sensitize the people on the dangers of using the illegal fishing gear.
Adoa said she will be an advocate between government and fishermen emphasizing that she will not watch them being beaten during the UPDFs operations in the lakes.
Adoa said after she is approval by the appointments committee and sworn in, she will organize for a grand celebration to thank God for her appointment and President will be the chief guest.
Quoting Philippians 4:13, Adoa said she will do all things through Christ who strengthens her.
Kasilo County MP, Elijah Okupa said Adoa will only fail to perform in the ministry if people fail her but she will succeed if locals support her.
"If Adoa is well supported, the president might elevate her to the full cabinet minister after this one year of service," Okupa said.
Okupa called for unity among the leaders of Teso.
It was only late Hebron Omax Omeda who served as minister of state in-charge general duties when Serere district was still under Soroti.

Does she love you or your money?