Hadija Namale during an interview two years ago

The entertainment industry has got many unsung heroes that gave it a firm foundation for today's musicians to enjoy.

Each region had performers and we bring you the famous female Baganda musicians who outshined others back in the day.

Hadijah Namale
Famous for songs like mukulike omwaka, Kasujja, Lubwama, Bosa, Nasuze Siridde and Zoozo. Namale was born in 1947and is a victim of child marriage as she was given away to a polygamous man at 13yrs. She was rescued by her brother who took her to a Congolese friend in Kisangani where she worked as a house help. She used to clean band instruments and attended free Congolese musical shows and it is from here that she learnt music.

When she returned to Uganda, Hadijah joined Kings Jazz band of Fred Masagazi and within no time, she was one of the most sought-after musicians of her time.

She partnered with Eclas Kawalya and found herself in the Suzana band. It was from here that she together with musicians like Masagazi and Kawalya formed the top 10 band which was short-lived as Namale and Kawalya left and formed the Rwenzori band that reigned until the birth of Afrigo Band.

The time came and the Rwenzori band members had to find the future elsewhere. Afrigo band had been formed and musicians like Namale could not keep up with the competition. She resorted to selling brew. However, she was arrested for allegedly giving refuge to rebels. It was said that her place was their hangout. She currently lives a quiet life in Masaka with her child and deals in cosmetics.

Sarah Kyolaba
The late Sarah Kyolaba was commonly known as suicide Sarah. She was also the fifth and favorite wife of Uganda's former president Amin Dada.

Before her encounter with Amin, Sarah was a former dancer with suicide Mechanized Regiment army band and a go-go dancer with the Crane band. It is also rumored that she had a fling with Crane Band's Jesse Gitta before she was wooed by Amin.

She was recognized as a great dancer and her moves continued to trend even after she stopped performing.

After her lavish wedding, Kyolaba could no longer entertain the public with her dance strokes. She was left to dance for Amin alone.

Sarah Kyolaba bore Amin three children before they separated. She died of cancer in 2015 in London.

Joanitah Kawalya
Joanitah is a daughter to the late prominent musician Eclas Kawalya. She worked as both a music and fine Art teacher at Lubiri High School before. Back in the days, she used to sing with Diplock Ssegawa's Wrens band. She was introduced to the band by her father who was a guest performer with the band. 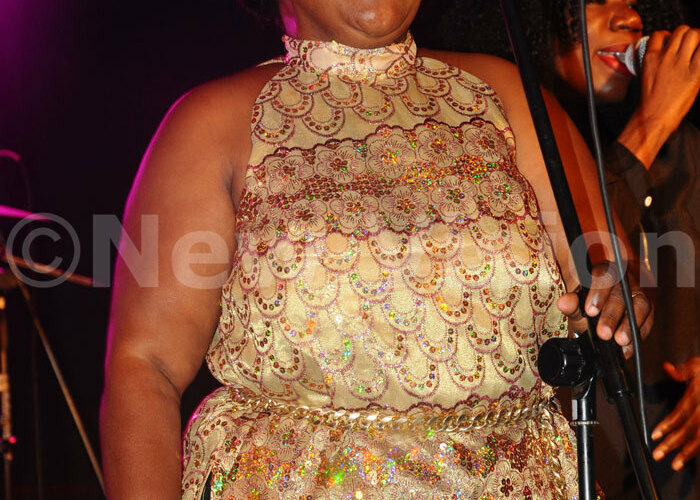 At 19, Kawalya joined Uganda's longest-standing band "Afrigo Band". The time came and she had to choose between music and teaching. Joanitah chose the music and she has never looked back.

Stella Nanteza
The late Stella Nanteza was the wife to the late Jimmy Katumba and the two are the co-founders of the Ebonies drama group.

After the Ebonies formation, Stella was the lead singer in the early 1980s. She is the voice behind the Ebonies' greatest hit songs such as Endabirwamu yange Junior, Emitima egirwadde  okwagala and others.

The soulful musician later left the Ebonies for United Kingdom (UK) where she lived for 17yrs. she died in 2014 after a car she was travelling in got involved in a head-on collision at Kyebando. She died on the spot.

Nanteza and Jimmy had two children.

Margaret Nakibuuka
Margaret Nakibuuka was a prominent female musician in the 1960s and 1970s. She came from Luweero after her family faced money hardships and could not afford her education.  She was mentored by ballroom dancer Christopher Kato for her start in the entertainment industry. Margaret was later trained by Andrew Kyambadde and the two got married in 1969. Together, the two moved from band to band until they broke up.

She got married again to Frank Makuru and dedicated a song titled "Frank" her new love.  Frank became a hit and her signature song that she had to perform wherever she went. The success of Frank was partly responsible for her downfall as she decided to quit band music and went solo.

She quit music in 1979 and started tailoring at Nakulabye where she died due to high blood pressure in 2015.

Carol Nakimera
Carol Nakimera was a high-spirited musician who always entertained with an energetic performance. She is the voice behind the late '80s and 90's popular hits like omusujja, sembera and nengibobeza respectively.

She started her career as a dancer with the Super Rockets band but due to her consistency and hard work, Nakimera became the lead singer of the band. She was a versatile performer as she performed reggae, jazz, R&B, Zouk among other genres.

Much as she was a high-spirited performer, Carol had few songs to her name and even so, most of those songs were not composed by her. She was also known for moving from one band to another as she performed with the band with the Twins band, Central Volcano, the Emmitoes, Vibrations among others.

She is also remembered for teaming up with Sarah Birungi and they organized the first-ever feminine show at Nakivubo that saw performances from over 20 female musicians.

After years of hard work, Nakimera quit music for poultry. She died of liver complications in 2003 at 29yrs.