MENU
What has gone wrong for Manchester City?
Previous Story

The Soccer Academy shines in Dubai
Next Story

Under Jurgen Klopp, Liverpool are chasing their first English top-flight title since 1990, and their 19th overall.

During Klopp's first campaign at Anfield, Liverpool reached the finals of both the League Cup and Europa League. (AFP)

Under Jurgen Klopp, Liverpool are chasing their first English top-flight title since 1990, and their 19th overall.

Jurgen Klopp has agreed a contract extension with Liverpool until 2024, the runaway Premier League leaders announced on Friday.

Klopp, who moved to Anfield in 2015, guided Liverpool to Champions League glory in June and they are currently eight points clear at the top of the Premier League.

"For me personally this is a statement of intent, one which is built on my knowledge of what we as a partnership have achieved so far and what is still there for us to achieve," the 52-year-old Klopp told Liverpool's official website.

"When I see the development of the club and the collaborative work that continues to take place, I feel my contribution can only grow."

A statement from owners the Fenway Sports Group (FSG) said Liverpool had taken "giant strides in re-establishing themselves as one of world football's powerhouses" under the German.

During Klopp's first campaign at Anfield, Liverpool reached the finals of both the League Cup and Europa League but ended the season empty-handed.

They lost 3-1 to Real Madrid in the 2018 Champions League final but regrouped and became European champions for a sixth time after a 2-0 win against Tottenham in Madrid this year.

Liverpool lost just one match in the Premier League last season, racking up 97 points -- the best in the club's history -- but missed out on the title by a solitary point to Manchester City. 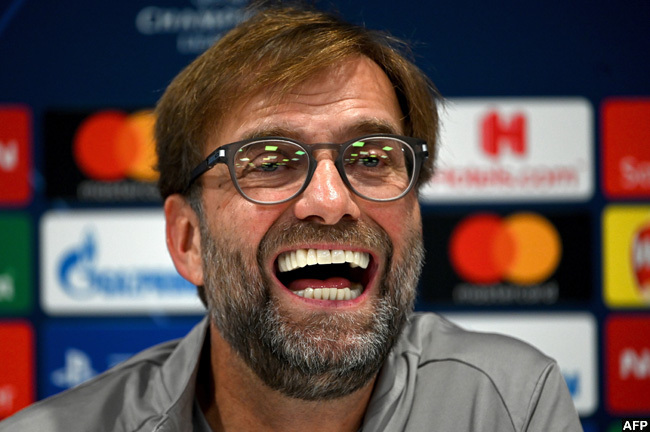 "For me personally this is a statement of intent," says Klopp

So far this season, Klopp has overseen Liverpool's surge to the top of the Premier League, where they currently sit eight points clear after 15 wins from their opening 16 matches.

They are chasing their first English top-flight title since 1990, and their 19th overall.

Klopp, who won two Bundesliga titles with Borussia Dortmund, said success on the pitch was not the only measure of progress -- he had also seen commitment from the owners.

"When the call came in autumn 2015, I felt we were perfect for each other. If anything, now I feel I underestimated that. It is only with a total belief that the collaboration remains totally complementary on both sides that I am able to make this commitment to 2024.

"If I didn't I would not be re-signing. This club is in such a good place I couldn't contemplate leaving."

Assistant managers Peter Krawietz and Pepijn Lijnders have also agreed deals keeping them at the club until 2024.

Principal owner John Henry, chairman Tom Werner and FSG president Mike Gordon said in a joint statement: "We are absolutely delighted we have been able to reach an agreement with Jurgen, as well as Peter and Pep, on extending their time with the club.

"As we are sure our supporters would agree, it is truly wonderful news and we are all extremely thrilled, not only professionally, but personally too."

Liverpool reached the knockout stages of the Champions League with a 2-0 win against Salzburg on Tuesday and will play in the Club World Cup in Qatar later this month.

'Do not use violence to cause change'

Youth develop manifesto ahead of 2016 polls

Youth MPs: It is time to work for youth