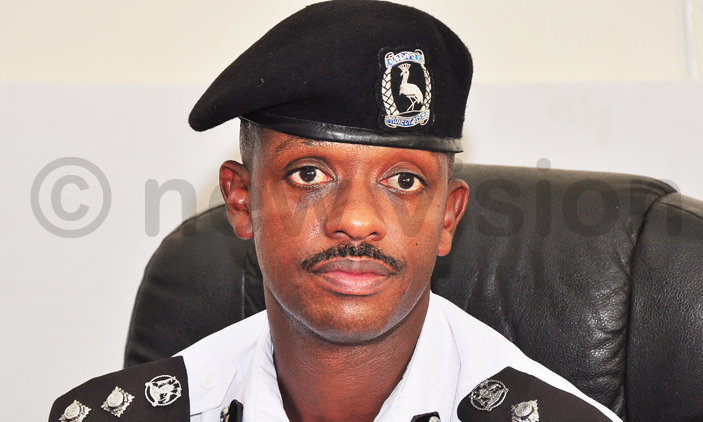 This was after Musinga reportedly refused to heed a court order granting custody of their three children — two boys and one girl — to their mother. One child is aged eight years, another is six and the last-born is three years.

According to Kyinkuhaire, Musinga has forcibly taken away the two older children from her and she does not know their whereabouts. She is only taking care of the youngest child.

"Musinga removed the two children from St. Savio Kisubi Primary School and took them to Hormisdallen Primary School, Kamwokya. I have been visiting them, but he went to Hormisdallen and picked the children three days before the term ended. When I went to school, I was told that their father had taken them. I need my children because I am alive and I can look after them," Kyinkuhaire said.

In December 2016, Musinga's wife petitioned Makindye Magistrates' Court and it granted her custody of their three children, but the Kampala traffic chief has since taken them away. Musinga had only been granted visiting rights.

Musinga wedded his wife at Namirembe Cathedral on September 17, 2010, but the two have since 2016 developed irreconcilable differences.

DNA PROVES MUSINGA WRONG
In January 2017, Sunday Vision reported that Musinga had filed for divorce over irreconcilable differences with his wife. He accused his wife of infidelity and he claimed that their third child was not his.

However, a DNA test carried out to ascertain the paternity of the contested child at Lancet Laboratories on Buganda Road in Kampala showed that Musinga was the child's biological father with a probability of 99.999%.

Sources revealed that besides accusing his wife of infidelity, Musinga also accused Kyinkuhaire of denying him conjugal rights for two years. He, therefore, asked the court to separate them in his divorce application case number 24 of 2016.

However, a relative of Musinga's wife, who did not want to be named, dismissed Musinga's claims, arguing that "he (Musinga) sent his wife to the village in Sembabule in 2016, when she had just had a baby. Musinga told his wife to go and wean their child as she prepared to come back and go back to school. We were surprised to learn that he had applied for divorce."

The relative added: "Musinga brought our sisters clothes and dumped them at our home. That is when we started smelling a rat. When our sister returned to Kampala, she found Musinga had shifted from their rented house in Bunamwaya to an unknown destination."

Kyinkuhaire said she is ready for the divorce if Musinga compensated her with sh100m and 25 head of cattle that her family gave them on their wedding day. She also wants Musinga to pay the children's school fees.

"Musinga promised to adhere to all my demands, but he has not done so to date. Instead, he is threatening to take away even the last-born."

Makindye Court's Principal Magistrate Grade One, Juliet Nakitende, on December 21, 2016 ordered that "interim custody of the three children (minors) is hereby granted to the applicant (Kyinkuhaire)."

However, Nakitende granted Musinga visiting rights as he and his wife may agree. She added that the interim custody order granted to Kyinkuhaire will stand until such a time when the court shall decide otherwise.

Unfortunately, Kyinkuhaire said she has not seen her children since and that she does not know their whereabouts despite court granting her custody.

"When my lawyers went to his office at Kampala Central Police Station to serve him with the court order, he blocked them. All I want are my children. What kind of policeman does not respect court orders?" she wondered.

Attempts to get a comment from Musinga were futile.

Sources said senior Police officers, Musinga's relatives, and friends have also tried to intervene with a view of resolving the matter in vain.

Who is Musinga?
Aged 39, Musinga was on February 4, 2016, promoted to Senior Superintendent of Police, a rank which he holds to date. He was among the 496 Police officers that President Yoweri Museveni promoted.

Musinga replaced the then Assistant Commissioner of Police, Lawrence Niwabiine, as the Kampala Metropolitan Traffic Police commander in November 2014.

Before that, Musinga came to the limelight as one of the fiercest cadet officers at the time the city was awash with the opposition-led riots in 2011.

"When he had just been commissioned, Musinga was one of the few Police cadets who would carry a pistol around his waist," an officer, who works with Musinga, said.

Musinga, who had been appointed Kampala CPS divisional police commander at the end of 2011, was in March 2012 transferred to Kiruhura as the district Police commander.

This was after the then Kampala Metropolitan Police commander, Felix Kaweesi, had in February 2012 erroneously suspended him (Musinga).

Musinga was suspended after he reportedly released a suspect (policeman) who shot at Action for Change (A4C) supporters at a rally in Namungoona, a Kampala suburb.

The suspension followed queries from the public and some senior police officers about the action taken against Musinga.

The then deputy Inspector General of Police, Martin Okoth-Ochola, said Musinga's suspension was erroneous because it is only the Police boss (then Gen. Kale Kayihura) or his deputy, who had the power to suspend an officer.

Musinga bounced back in Kampala in the field force unit as a deputy regiment commander in early 2014. He was later promoted to the rank of SSP and moved to the Kampala Metropolitan traffic department, which he heads to date.