Kadaga calls for fairness in inter-parliam...
Next Story

After Tuesdays’ action, Kenya is through to the semifinals, Tanzania is on three points, while Sudan and Zanzibar have one point each.

After Tuesdays’ action, Kenya is through to the semifinals, Tanzania is on three points, while Sudan and Zanzibar have one point each.

Kenya needed two second-half strikes from substitute Hassan Abdullah and Oscar Wamalwa to edge a stubborn Sudan side 2-1, to become the first nation to storm the CECAFA Senior Challenge Cup 2019 semifinals on Tuesday at Lugogo.

Defending champions, Kenya began the game on a high launching numerous attacks but strikers Johnstone Omarwa and Oscar Wamalwa were not sharp enough in front of the goal.

With the numerous Kenya attacks, Sudan resorted to defending in numbers and employed counter attacks.

Their strategy paid dividends in the 31st minute when Mohamed Namir beat an offside trap to put his nation in front.

The Kenyan continued to press on for an equalizer but the defensive partnership of Montasir Yahia and Mubarak Abdullah worked restlessly to deny the Kenyan forwards from shooting accurately at their goal.

In the second half, the Kenyans improved their sharpness in front of the Sudanese goal when Coach Zedekiah Otieno sitting in for suspended head coach, Francis Kimanzi introduced Hassan Abdullah for Johnstone Omorwa.

Hassan needed only two minutes on the field to level matters for the champions after he headed in Kenneth Kimanzi's well delivered a free kick in the 66th minute.

The Kenyans continued to dominate proceedings after the equalizer and were only denied extending their lead by Sudanese goalkeeper Mohamed Abdulla who kept their efforts at bay.

Mohamed was, however, let down by his defenders who relaxed in containing towering striker  Oscar Wamalwa, who headed Kenya in-front from Timothy Otieno's low cross for the second goal in the 76th minute.

The Kenyans could have had more but two other goals from David Owino's tap in and Lawrence Juma's stunner were ruled out for offside by the referee Tiku Magos.

Sudan's last chance to grab a point from the game fell to Munir Younis in a one on one situation with Kenyan goalkeeper Samuel Odhiambo but his low power chip landed on Odhiambo's chest. 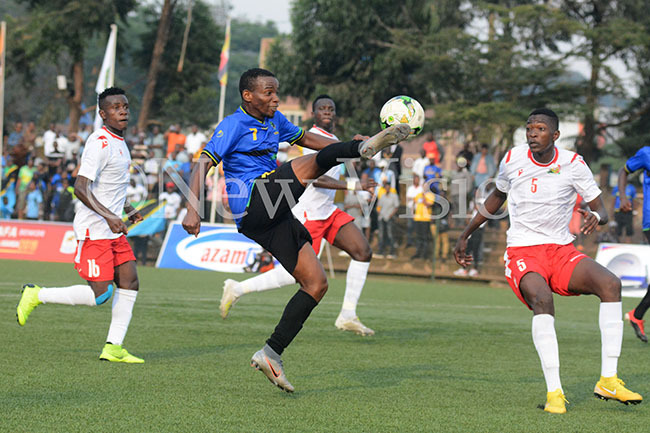 Action between Tanzania and Kenya during a CECAFA match at Lugogo on Sunday.

"It was a good-spirited performance from the boys, coming from a goal down to get three points that was excellent of them," Otieno stated.

His counterpart Mohamed Dawoud blamed his side's loss to poor refereeing by referee Tiku Magos who he blames for not awarding his side two clear penalties that would have changed the result.

"I think the poor decisions of the referee cost us the game. We had to be awarded two clear penalties but he did not take it seriously and in the end, we lost such an important game," Mohamed complained.

Earlier, Tanzania registered her first win of the campaign to keep her semifinal hopes alive after Ditram Nchimbi struck the lone goal that saw them defeat Zanzibar 1-0 at the same venue.

After Tuesdays' action, Kenya is through to the semifinals, Tanzania is on three points, while Sudan and Zanzibar have one point each.