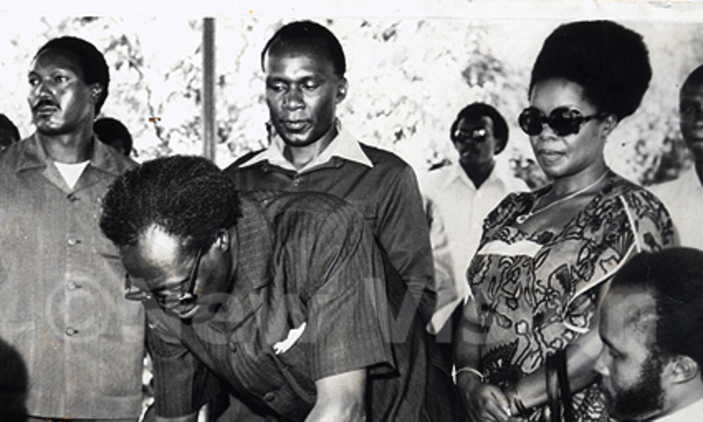 On December 10, 1980, the first pots-Amin elections were held. Dr. Milton Obote has sworn in days after, although DP did not agree with the results.

In 2012, the former information officer, MAGEMESO NAMUNGALU, told New Vision the details of the elections and what exactly happened.

A correspondent for the Soviet Union News Agency, Tass, came to me at 11.00 a.m on December 11, 1980, and asked for my comment as an information officer for the Uganda Electoral Commission.

It was about a press release issued by the Democratic Party (DP) that they had won the 1980 general elections with 66 constituencies.

I said I had no comment because vote counting had not yet started. I was later bombarded by a number of foreign journalists. That forced me to go to the DP headquarters where I found a group of people celebrating.

Later, there was talk about one of the top DP members going to Paulo Muwanga to ask him to prepare the swearing-in ceremony of the DP government, but bemused Muwanga is said to have reminded the gentleman that vote counting had not yet started.

The elections were organised by the Military Commission under the chairperson, Paulo Muwanga and his than deputy, Yoweri Museveni with the ceremonial presidential commission composed of three. They were assisted by six policy-making commissioners chaired by Kikira, who were agreed on by the four contesting political parties.

However, the elections were bedeviled by a number of controversies such as insecurity after the war that ousted Idi Amin and chased away the 15 Uganda Peoples Congress unopposed candidates of West Nile and Lango regions.

In West Nile, voters' registration began on October 6, 1980, but was suspended after one day on account of an invasion by remnants of Idi Amin's army. In Lango it was a nightmare for anybody to oppose the Uganda Peoples Congress party.
It is almost the same position because all of the 10 UPC legislators in Parliament are from Lango.

That, according to the Commonwealth Electoral Observers Team's report, contributed to 15 UPC unopposed candidates. The Commonwealth Secretariat in London sent a team of electoral observers composed of Chief Emeka Enyaoku, than Commonwealth Assistant Secretary-General and Dr. Abbas Bundu of Economic Community of West African States.

At Entebbe Airport, I and other government officials welcomed the team that was expected to meet the leaders of the four political parties that participated in the elections.

The team met DP president Paul Ssemogerere, CP president Mayanja Nkangi, and UPM President Yoweri Museveni, at the parliamentary buildings in Kampala. The three did not voice any complaint about there freedom in campaigning.

Arrangements were made for us to travel to Hoima, where UPC president Apollo Milton Obote was campaigning.

In the morning, one of the team members remarked: "How do the other party leaders expect to win the elections without campaigning?"

I and my colleagues were civil servants, so we made no comment. On December 10, the secretary of the Electoral Commission, Vincent Sekkono, gave me a press release to read, and when I finished reading it, he drove me to Radio Uganda.

At Radio Uganda, one Bakubi, a news editor, read the announcement extending the time for voting to December 11, because of the delays in starting voting on December 10. After the reading of the release, Sekkono and I parted.

Sekkono was committed to a well-organized general election, but he was frustrated when substantial voting materials were sent to wrong places.

He fled Uganda and a senior assistant secretary, James Odong, replaced him. The team at the Uganda Electoral Commission was composed of young firebrands, who included the current education permanent secretary, Francis Lubanga.

In the presence of some Commonwealth observers, international and local journalists, a newsreader announced the winner on Radio Uganda. That evening, there was a barrage of gunfire allegedly staged by Bazilio Olara Okello, who later masterminded the July 27, 1985 coup against Obote.

Paulo Muwanga made very devastating proclamations about announcing winning candidates, but the Commonwealth Team and other stake-holders persuaded him to drop the proclamations and announcement of winners proceeded normally.

Three women from Post Office were seconded to the Electoral Commission Secretariat to receive the votes on the telephone. On receiving the results they would pass them to electoral officials.

The results were for verification and than passed to me, for announcement on Radio Uganda. The first results came from Buganda and Busoga, won mostly by DP candidates. Later the situation changed when results from other regions came in. There were 126 constituencies and the leader of the party, which got the biggest number of constituencies, would become president.

After announcing UPC's 64th winner, the radio announcer told the country: "By this, UPC has won the elections."
Obote was sworn-in on December 15, 1980. There was talk that DP would boycott Parliament, but Paul Ssemogerere and his group joined parliament. The only UPM elected legislator Crispus Kiyonga fled the country.

The Uganda Electoral Commission published a report detailing the number of votes each of the contesting candidates got at polling stations. So far, that was the only report of this kind that existed on electioneering in the country.

Later, I got the Commonwealth Electoral Observers Team report signed by the chairperson of the team, E.M Deborah from Ghana and eight others.

On the allegations of winning by the DP, the Commonwealth team wrote: "…it had become apparent to us from the reports of there observations both during the polls and count that the DP was claiming to have won seats, which it had almost lost.

The claim was made of wins in Gulu, where we knew that the UPC was taking over 90% of the vote." The report also said: "At no stage did we lend credence to claims made by the DP that they had won a clear majority.

Rather we contacted the DP to advise it of the position as we understood it to be, and subsequently, the DP confirmed that some of the information from the outlying districts had been incorrect."