How Christmas in Uganda has changed over the years

A section of Ugandans born in the 90s who used to feel the Christmas excitement have struggled to relive it today since some of the special things they once regarded have become the usual things today.

A section of Ugandans born in the 90s who used to feel the Christmas excitement have struggled to relive it today since some of the special things they once regarded have become the usual things today.

Christmas season is always known as the big festive season or as some say ‘the best time of the year.' It always comes timely, towards the end of the year and in the last month of the year.

However, this is not the first time we are celebrating this festive season, it has been there over the years. Just as it was then, it still remains Christmas now and tomorrow, but the trends of celebrating it have changed with time.

A section of Ugandans born in the 90s who used to feel the Christmas excitement have struggled to relive it today since some of the special things they once regarded have become the usual things today. Things like meals today, what they used to be so excited about those days is what people eat on a daily basis. Attending Christmas day church service still remains the most common and important activity on the list of the morning of Christmas.

Aida Kanalo says that she misses that excitement of Christmas since today it can't compare to the good old days.

"We have grown up and I don't feel the good old Christmas excitement anymore, no shopping for clothes, celebrations last only up to the 25th yet while you are upcountry, gathered with the rest of your relatives at the ancestral home, Christmas celebrations go for a whole week, some last till 2nd January," she says. 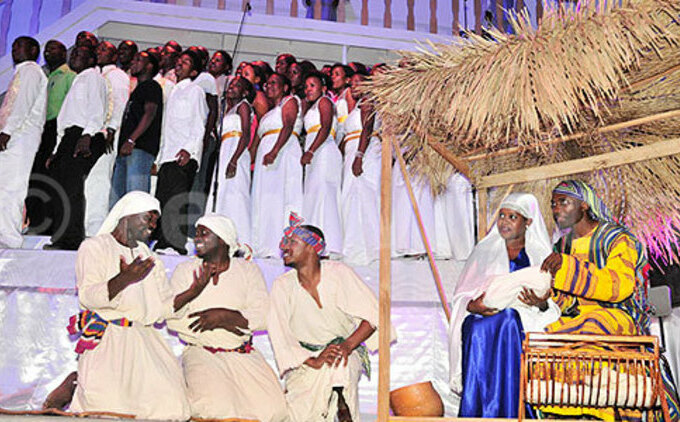 According to Martin Seku, a renown gospel artist, the Christmas shows back then were few and there were also few artists. Today the shows are now expensive.

"What is happening now is that there are a few artists who can afford to organize events which are professional, so, most of them have backed out and they are depending on the people who organize, but if they are less, then there will be fewer events for artists to perform on, but still I believe there are churches organizing evening Christmas festivals and a lot of artists will be invited to different churches," he says.

Seku recalls that those days they would just go to Namirembe  Guest house and put a few speakers, put a stage without the kind of high gear stage lights we see today and people would come and have fun. But these days such a thing can't be done.

Shopping is being given a new way towards Christmas as people can shop online other than stepping out into the market to get something.

Dorothy Ajwang, a resident in Mutungo, says that certain things made it feel like Christmas, but today, it's not until she is going to church that she realises it's  Christmas day. "We would come together as a family, eat lots of different food and enjoy each other's company. I had a new dress every Christmas, but now I don't even realise it's Christmas except when we go to church to pray," she says.

Gladys Kemitare, a lecturer at Makerere University Business School (MUBS), recalls how Christmas used to be when they gathered together as a big family when they were still kids.

"We would all go to my grandparent's place, all the twelve kids and we would eat together and even sleep in tents because we were a big number for the whole week. It was about being together as a family, playing, eating too much and climbing the hills and trees. We used to exchange gifts as well, however, today each family eats alone, I miss the togetherness," she recounts.

How to prepare for a Ugandan broke Christmas

The ice on Kilimanjaro may be gone forever!

Tarpaulin can save Kilimanjaro ice cap