As we wind down 2019 we look at the performances that thrilled Ugandans in 2019.

As we wind down 2019 we look at the performances that thrilled Ugandans in 2019.

She held her maiden concert dubbed Tears of a Woman at the Kampala Serena Hotel on 20th September 2019. The President who was in attendance jokingly promised to teach Catherine Kusasira's queen dancers how to dance in a cooler style.

For an army general better known for laying strategies to win military battles, it is hard to believe that Gen. Museveni would love something as ordinary as music. But during Catherine Kusasira's concert, President Museveni's soft spot for local music came out.  Twice during the show, the President stood up from his seat and wiggled his waist in a fully packed Victoria Hall at Kampala Serena Hotel in Kampala. 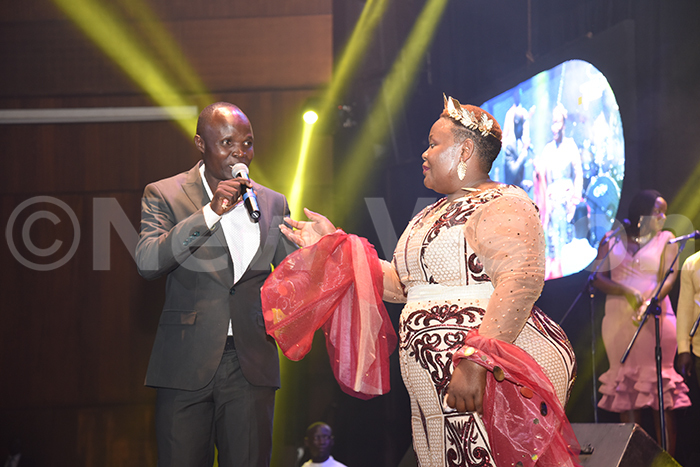 Catherine Kusasira and Ronald Mayinga at her concert at Serena- 20.09.19

His unique dancing strokes drew wild cheers from the audience.  And when Kusasira pulled some rare dancing strokes, she swept the President off his feet again before he made his way to the stage twice to pass on a token of appreciation.

For musicians, Museveni had two key messages: "Use the current wave of freedom in Uganda to develop your talents and mind about the message you blend in your music such that it does not disrupt the peace Ugandans are enjoying now." 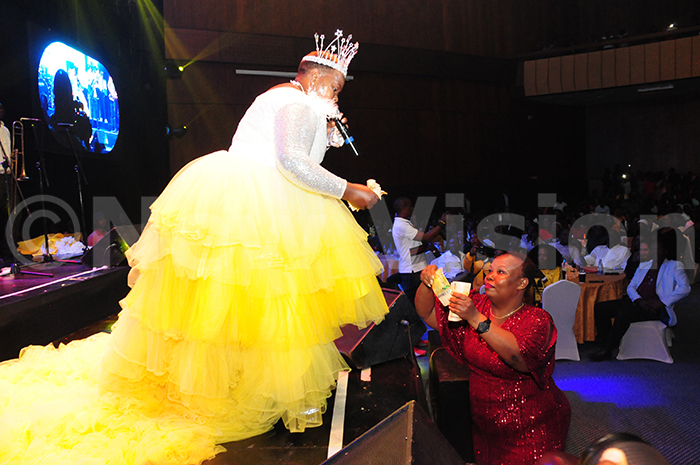 Museveni also spoke about wave of murders in the country at the time, corruption and the practice of evicting tenants all of which he vowed to tackle and defeat.   High profile personalities who joined Museveni at the concert were ministers Ronald Kibuule, Florence Nakiwala Kiyingi, Godfrey Kiwanda, and Ruth Nankabirwa. 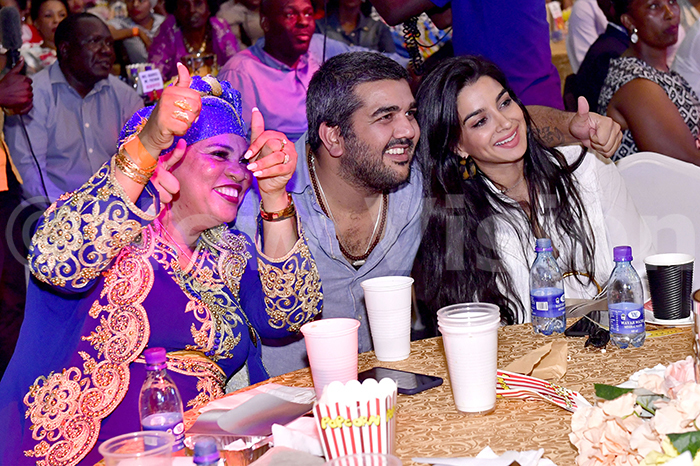 Museveni noted that this was his third time attending a similar concert organized by local artistes. City businesspersons like Godfrey Kirumira and Maama Fina who attended the concert showered Kusasira with cash while on the stage. 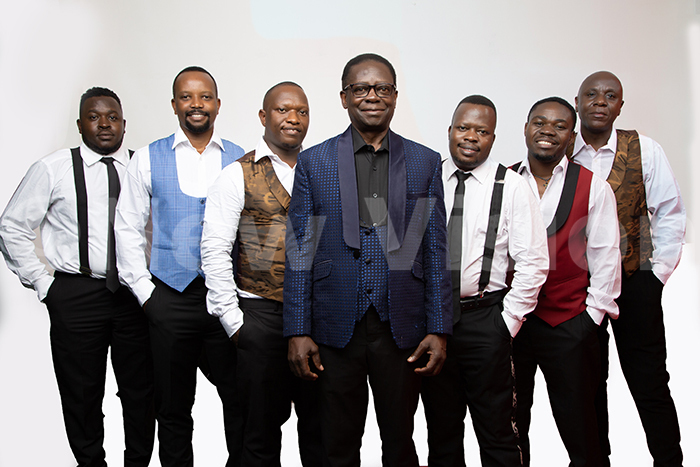 Joanita Kawalya's Jim was a hit among the fans. The whole house stood up as she sang and they danced away. The guest of honour was Kaddu Kiberu, who is Kabaka Ronald Muwenda Mutebi II's adviser. 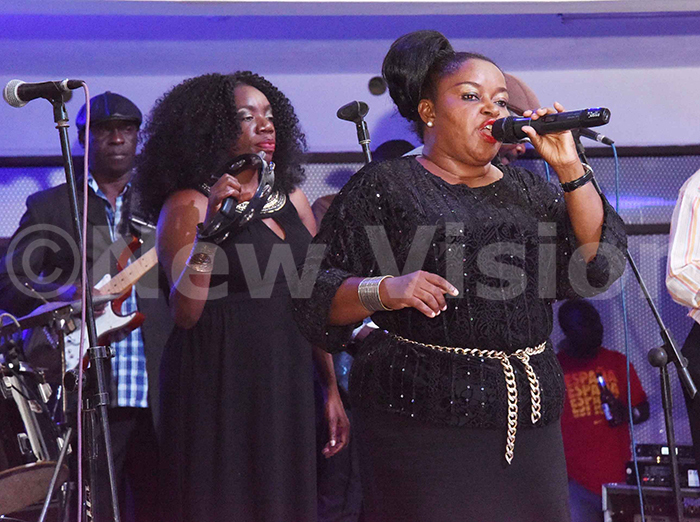 The show was attended by big shots mostly from Buganda kingdom.  Kiberu thanked Afrigo Band for promoting the local language and culture through their music. The band performed their title song, Teri Mubi that loosely means no ugly woman.  The song got members of the audience on their including city tycoon Ntake. 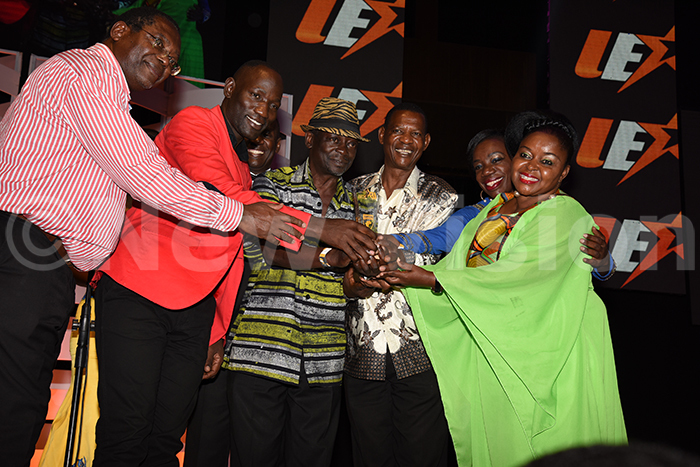 Audience members were free to request for any Afrigo song they would like to see the band perform. 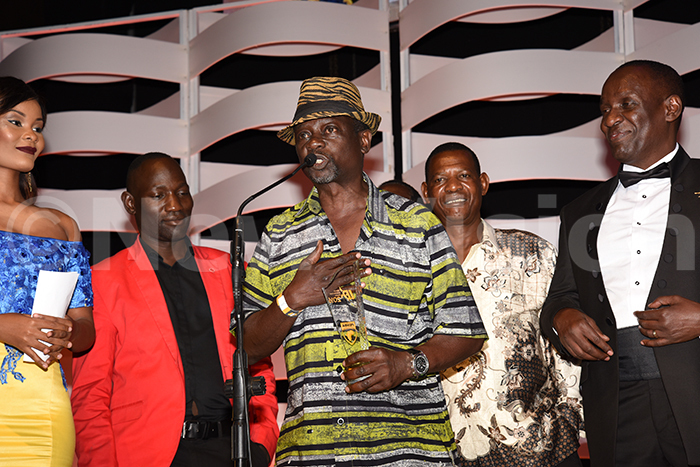 He held a maiden concert at Sheraton Kampala Hotel on 4th October. During Maddoxx's a living legend concert Mowzey Radio's (RIP) music was played and it the audience on their feet. 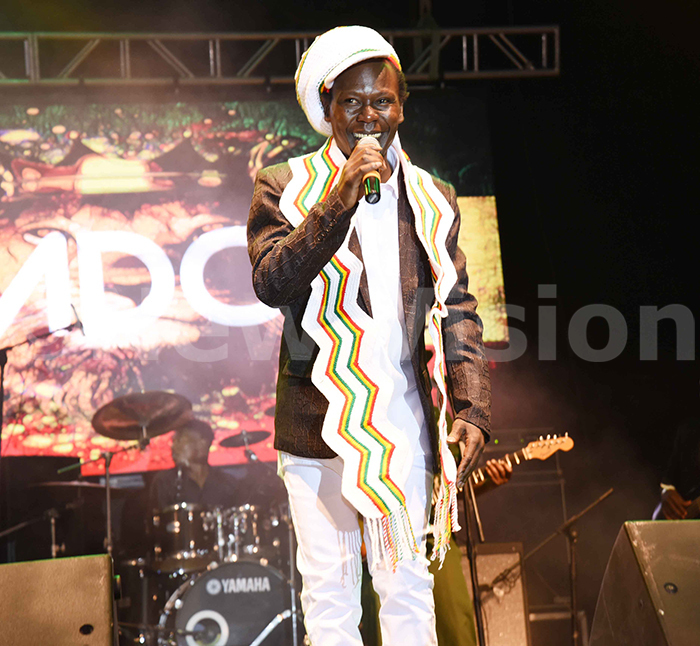 Henry Tigan would later perform on the night with his most memorable hit Aboogezi receiving great audience reaction. 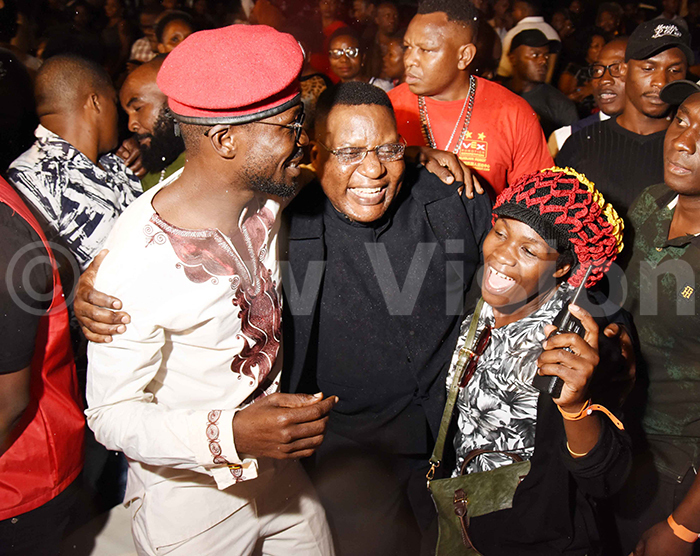 Maddoxx eventually took to the stage and his performance was worth the wait. Every member of the audience jumped to their feet and danced the evening away. 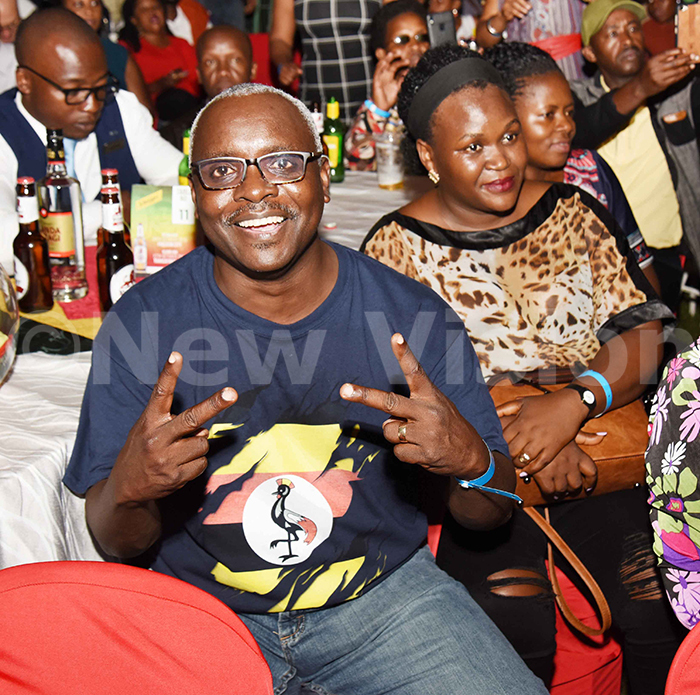 At the official launch of the new gin in town, Tanqueray, it was all about glitz, glamour and green color lighting up the Kampala Serena Hotel gardens. The invite-only cocktail party saw guests stroll along the red carpet as many paraded the eye-catching fashions. 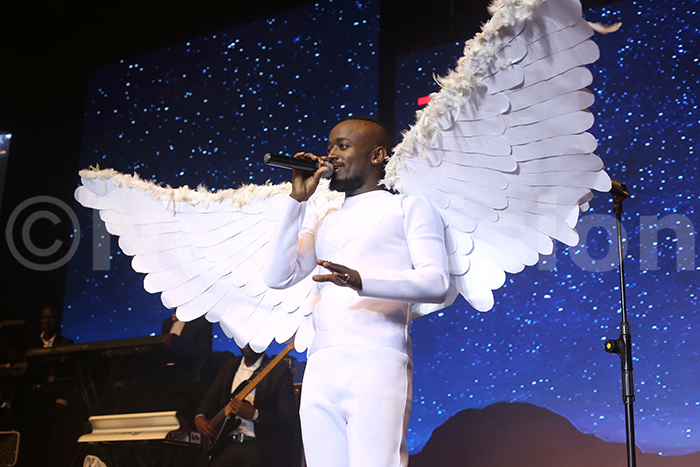 On the inside, it was all about cocktail drinks mixed with Tanqueray gin as revelers got introduced to the gin. The gin was officially launched by Uganda Breweries Ltd amidst several media personalities and fervent liquor lovers. 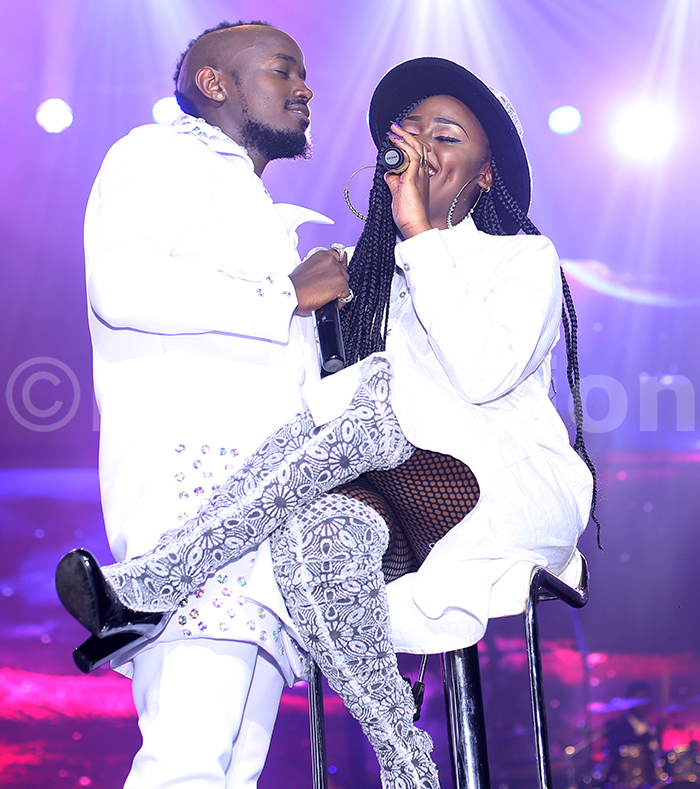 At the peak of the launch was an energetic performance sparked off by the H2C dancers who got guests in dancing mode. A few minutes later, the dancing trio ushered in the long-awaited performer of the night, Ykee Benda. 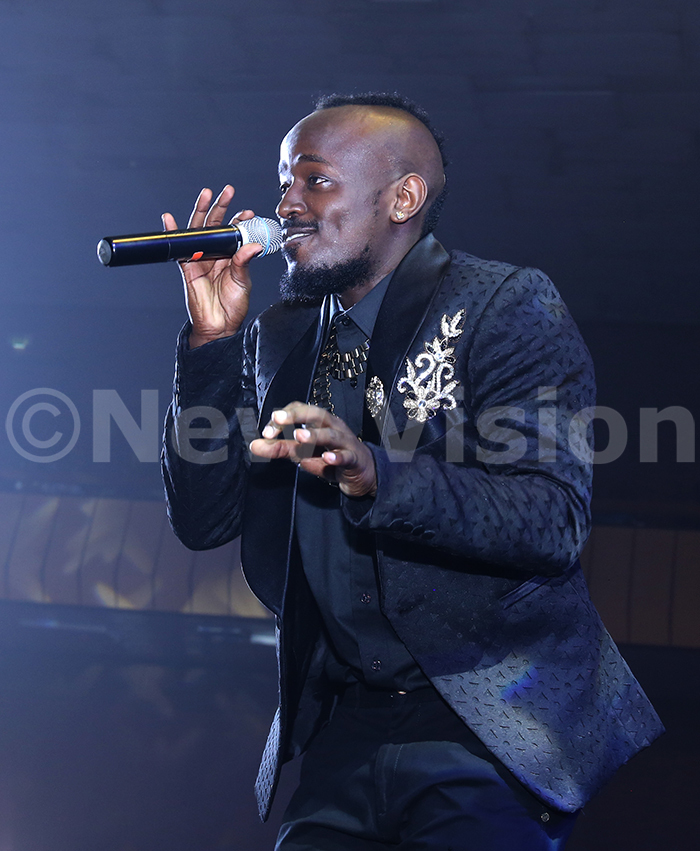 Benda entertained guests with most of his hit songs like Superman, Munakampala, Maradona and a special tribute of Singa to one of the ladies in the house, something that sparked excitement at the party. 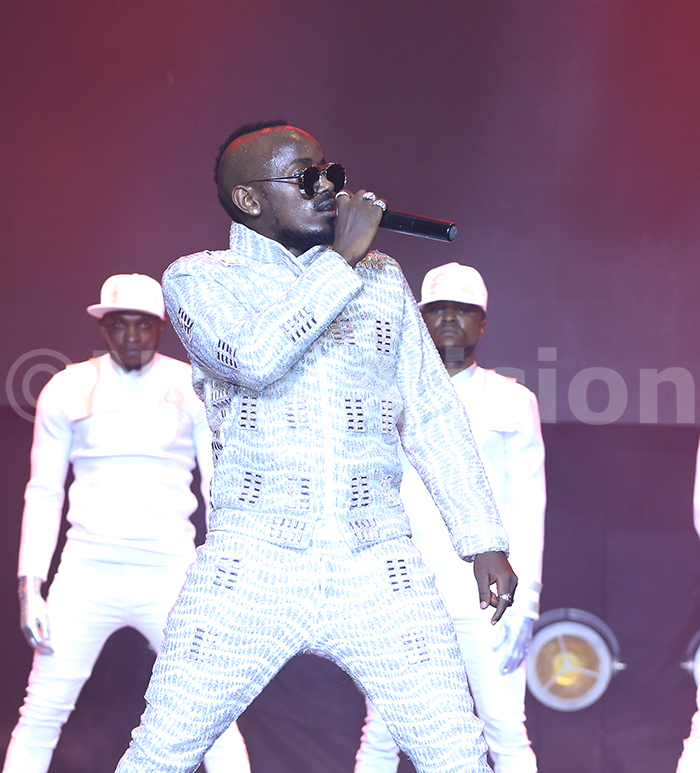 He thrilled his fans at his concert dubbed Nakusiima held at Lugogo Cricket Oval on 25th January.  Hundreds of fans sang along as he crooned his melodious romantic tunes. Lutalo stormed on the stage after several performances from other top Ugandan artistes including Lydia Jazmine, Irene Ntale, Levixone and Nina Roz. 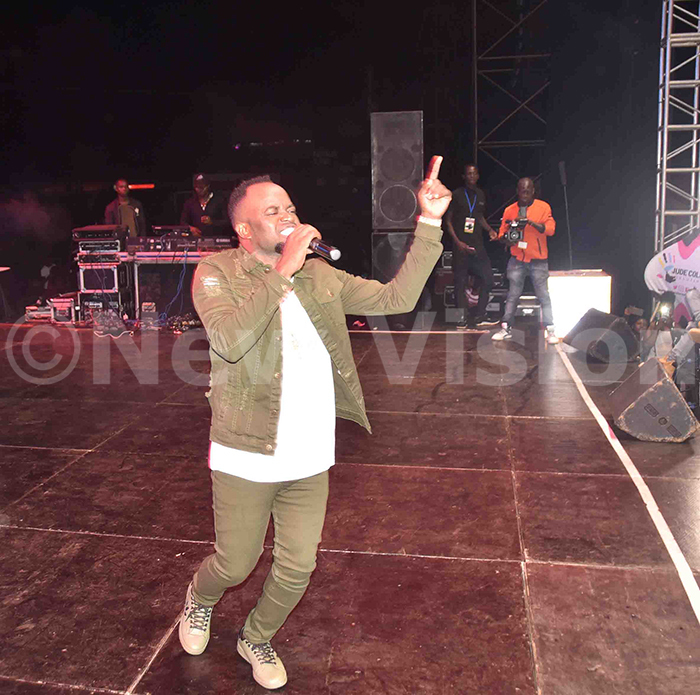 Lutalo, clad in a black; a coat with sprinkles, and a glittering shirt completed by black suede, opened his show with some crowd favourites Ujuwe, Mile and Manya, at 10 pm and sang for a full hour. 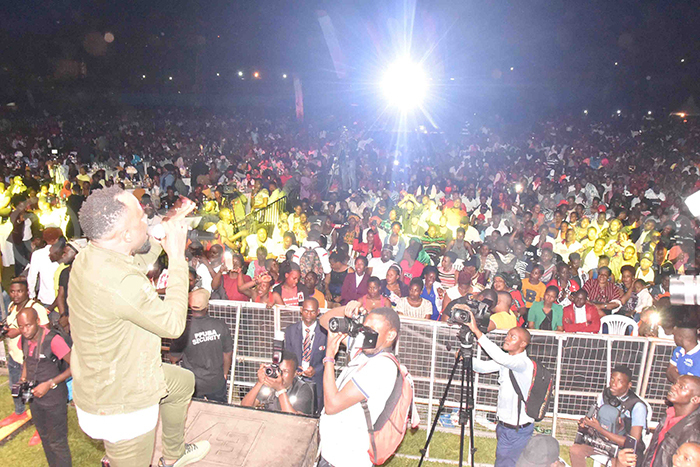 When he took a break, the thrilled crowd, which was now sweating from grooving to Lutalo's songs, was brought to their feet again by singers Chance Nalubega, Pastor Wilson Bugembe and Chozen Becky of Bankuza fame. 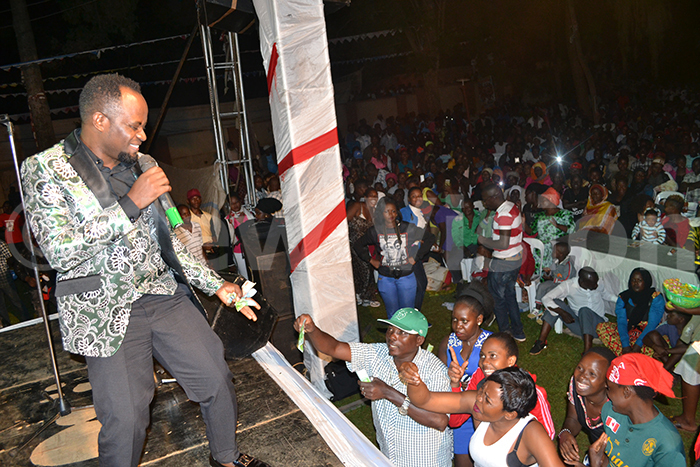 Lutalo returned at 11:30 pm to seal off the night with an energetic performance. He danced along with his queen dancers to his hit, Kwasa and Nkwagalira Ddala.

At the Johnnie Walker Highball tour held at O Café in the middle of Gulu town, the atmosphere was immensely fun-filled.  During the day, Tank road and other nearby streets had many itching with the urge of the night's show. 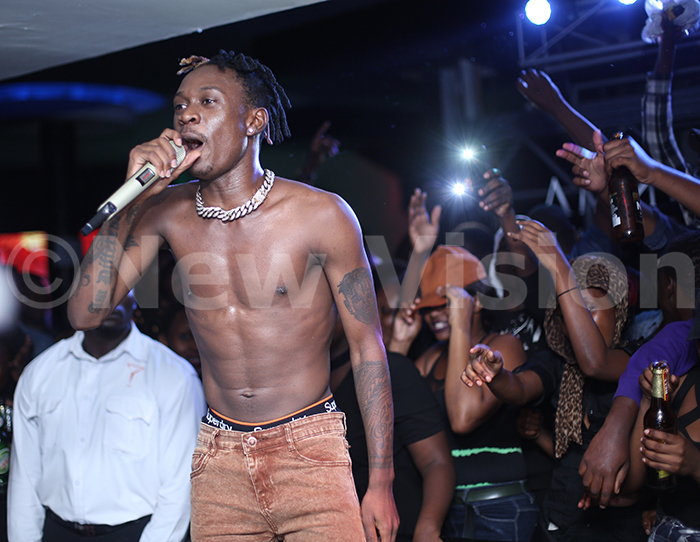 Away from the Fik Fameica excitement, several other partiers were anxiously waiting for their homegrown talents to take to stage. Worth noting too, Gulu partygoers are known for thronging party venues as early as they want, regardless of whether the event has started or not. O Café was full by 7:00 pm with the smartly dressed lads waiting for the first performer of the night.

Selector Jay, one of the event headliners, came in with exactly what the crowd was waiting for, home bred music. A whole session was dedicated to music by artists from Acholi land and in as much as you may not know about them; their music left the crowd sweating. The girls screamed their voices horse for Jay's skills on the decks. 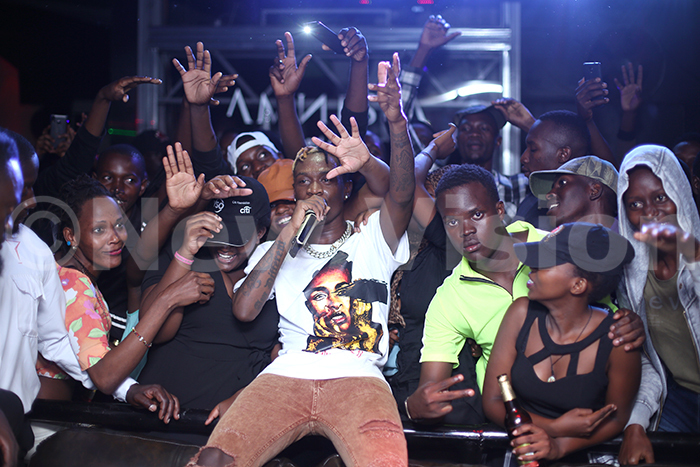 It was a long wait for the much-anticipated act of the night, Fameica, but quite seamless. Upcoming artistes like Mr. Eazy kept the crowd excited and entertained. The crowd was also occupied with the cocktails that made rounds everywhere. A few minutes past midnight, Fameica stepped on stage.

The crowd went ablaze and for some seconds, Fameica just stared at the excited crowd in disbelief. The rapper, with the help Selector Jay, performed all his latest hit songs including Tonsukuma, I'm different, Mafia and Omu Bwati among others. Fameica closed with his latest song, Tell me. The party, however, went on until morning. 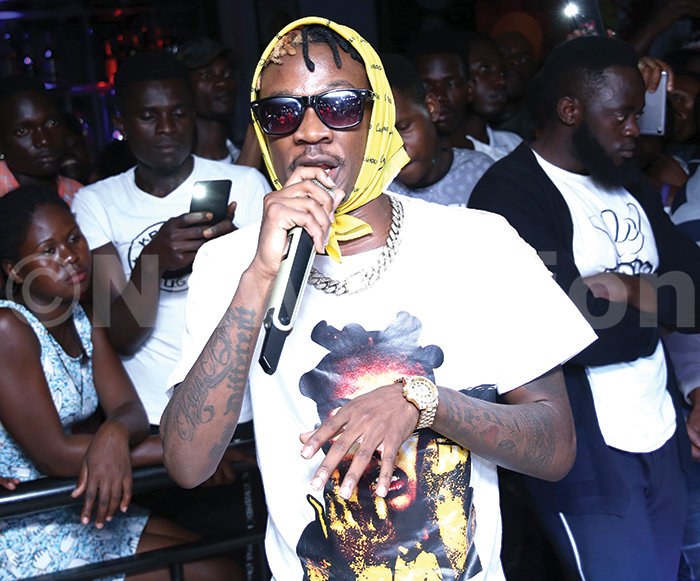 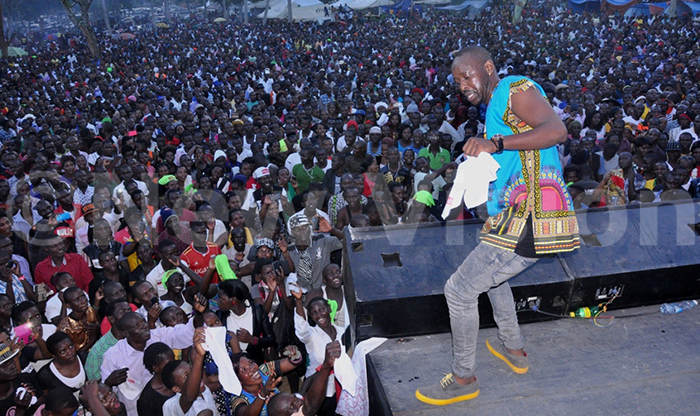 For the main purpose of the event- music performance by Kenzo, real names Edrisa Musuuza, did not perform. From the choreography to the curation, there was a visible effort that he was giving the fans his best.

Flanked by an African traditional themed dance composition, the BET Award winner hit the stage at 9:40 pm in the same air with kingly African-fabric attire. He started off with songs off his new album The show was Kenzo's moment. A moment to celebrate all the big hits he has churned out in the past decade. 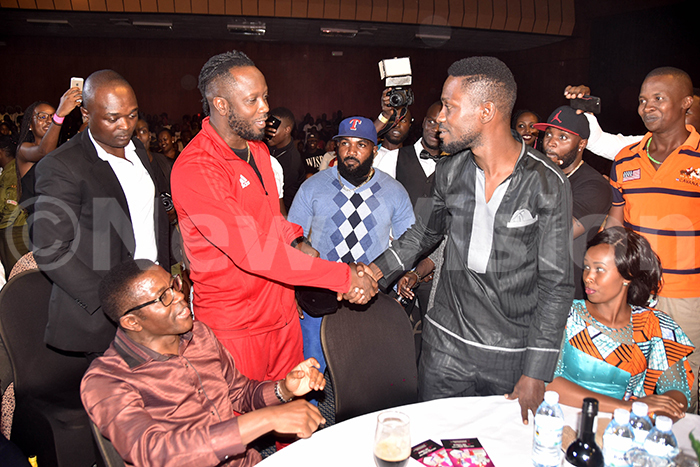 To reminisce on the times since his Mickie Wine duet titled Yanimba which introduced him, to the breakthrough hit, Stamina to massively successful Sitya Loss which cast him to the international spotlight.

And a moment to cherish the big achievements that have elevated him to be among the top of the creative arts industry of Uganda and the region.  But minutes into his show, Kenzo paused his performance and called out his seniors, Bobi Wine and Bebe Cool, who were in the house. 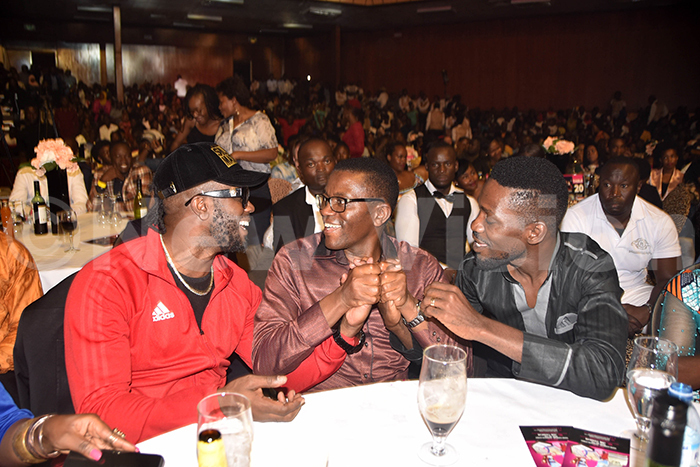 And that automatically changed the news. Bobi and Bebe have been rivals for years on end, both musically and then the recent political wave where Bobi, now a Member of Parliament, has come out prominently to oppose the government whilst his long-term musical nemesis continues to support the regime.

So the incident of Kenzo calling out the two artists to sit on the same table with the Katikkiro of Buganda, Charles Peter Mayiga would cause not only a musical but a political statement, where the rivals shook hands and hugged. The house went into raptures; as pictures of the moment went viral on social media minutes later.

Besides that, the show had a splendid four-hour performance, beautifully produced by John Ssegawa. Kenzo took fans down the memory lane as they grooved to some of his popular hits that have seen him globetrot, rising the Ugandan flag. 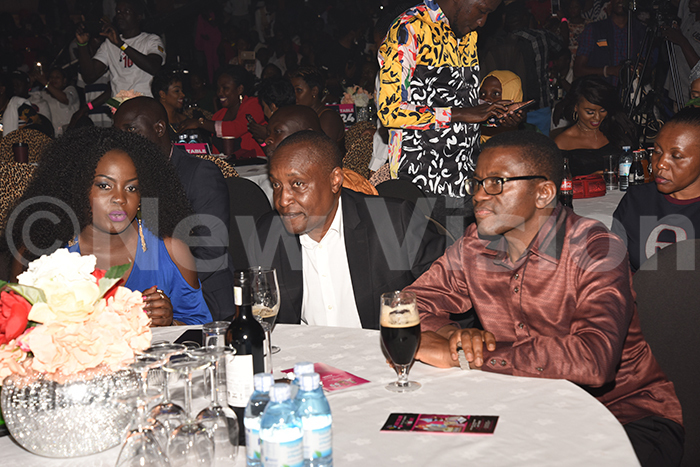 Dance featured prominently. If one missed the fun in the music, they wouldn't miss the entertainment in the impressive eclectic choreography Kenzo served his full-house audience.

NFA gets motorcycles, trucks worth sh1.6b

Forests for food, medicine and income