Musa Ecweru, the Minister of state for relief, disaster preparedness and refugees, has released a statement on the floods, landslides and windstorms disaster situation in the county. Here goes:

1.1 On Monday 2nd December rains began falling in the Mt Elgon subregion and several parts of the country at about 11.00 pm and continued upto 3.00 pm (15 hrs of rainfall) on Tuesday 3rd December. This heavy unusual rainfall followed a near daily rainfall for the past three Months of November, September and August.

1.2 It caused multiple landslides in the villages of Namasa, Naposhi and shukururu in Bushika subcounty of Bududa district killing 4 people, injuring 5 and displacing over 6,000 people (750 hhs). Review of villages households registers is ongoing to establish number and names of missing persons. Assessment of the number of hectares of houses, plantations, crop and livestock destroyed is also on-going.

1.3 In Sironko District, 2 adults and 2 children were killed in Nabodi village, Bumumulo Parish of Zesui subcounty. A rapid assessment established over 4,000 people (500 hhs) were affected and they lost hundreds of acres of plantations, crop and livestock. A detailed assessment is taking place to determine exact numbers of houses and livelihood assets were lost.

1.4 Multiple landslides / floods also occurred in the following subcounties of Sironko District; Bukise , Bumasifwa, Masaba, Bumalimba and Budadiri Town Council without deaths and injuries as most people in the affected areas had shifted earlier to safer locations. The LC2 chairman of Bumadua parish, Yonisan Bubutendye, standing by the area of a section washed away from rains. (Credit: Geoffrey Nyamwongera)

1.6 Sironko Town the Headquarters of Sironko District was flooded with water flowing along all streets and into houses, however, no person within the Town council was injured.

1.7 A number of villages in the districts of Bukedea, Serere, Ngora, Katakwi, Amuria, Kapelebyong, Tororo and Otuke are submerged, however, no injuries reported as residents had early shifted to safer locations.

1.9 River Nile cut off road transport to West Nile subregion when its submerged the road near Pakwach bridge.

1.10 The risk of more flooding and landslides is real.

1.11 Warning messages urging the population to keep away from river banks, and steep slopes are continuously being sent out.

1.12 People should not walk, or allow boda-boda riders and cars carry them across flooded section of roads and bridges.

1.13 Government has released shs 20.0 billion for emergency procurement of inflatable boats, tarpaulins, blankets, relief food, drugs for water borne diseases and culverts for fixing washed away bridges under the life-saving and rescue phase (Nov 2019- Jan 2020) of the flooding/landslides situation.

1.14 Post Disaster Needs Assessment (PDNA) will be conducted in January 2020 to determine total level of damage and losses and actions for the Recovery and Reconstruction.

1.15 A rapid assessment conducted in the most affected subregion - Mt Elgon ( Bududa, Sironko, manafwa, Namisidwa and Mbale puts the number of displaced persons at 25,000; affected households at 85,000 and damaged acreage of crop and plantations at 21,500 hectares.

1.16 The number displaced in the two subregions of Teso and Bukedi subregions stands at 55,000 people with over 120,000 hectares of crop destroyed. The population affected (not displaced) in these two subregions is bigger but the impact is comparatively lower
compared to Bugisu.

1.17 Districts along the banks of river Nile in West Nile subregion have equally suffered losses of crop and homes to flooding. Assessments are on-going 1.18 Also affected are the hilly parts of the subregions of Kigezi and Rwenzori, and the low-lying district of Ntoroko.

1.20 The IGAD Climate Outlook is held Quarterly. It brings together National, Regional and International Climate Scientists and in that forum they forecast rainfall for the next three months.

1.21 The 53rd Forum for the Greater Horn of Africa Climate Outlook was held in Dar es Salaam, Tanzania from 26 th to 28th August 2019 for the period September to December, 2019. 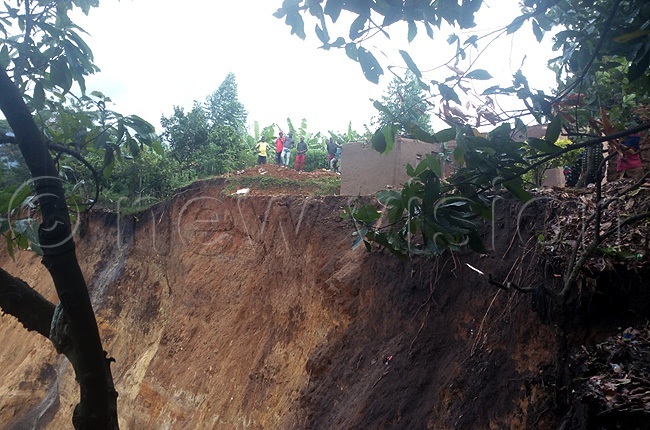 1.22 Above normal rainfall was predicted.

1.23 Relevant sectors of government that would be affected positively and negatively were informed and they did preparations early.

1.25 Villages at high risk were physically visited and awareness and sensitization meetings held with persons at risk.

1.26 Safe homes in the neighbourhoods were identified and requested to accept to host households at risk for the period September - December
1.27 OPM provided hosting and hosted families with 200kgs of rice (China donation), 100 kgs of beans, 5 pcs of tarpaulins and 5 pieces of Mosquito nets.

1.30 National Emergency Coordination Center (NECOC) was fully activated to operate 24 hours to receive information from all parts of the country with a Toll Free line 0800177777. 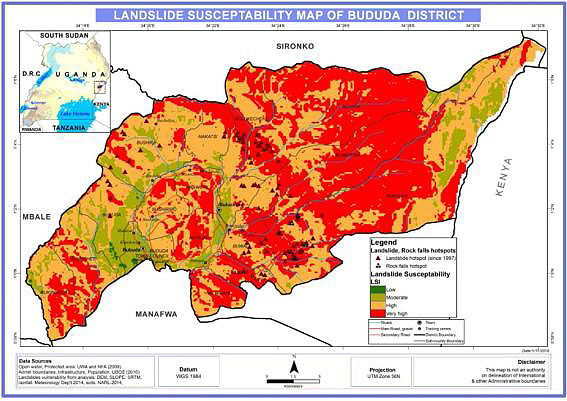 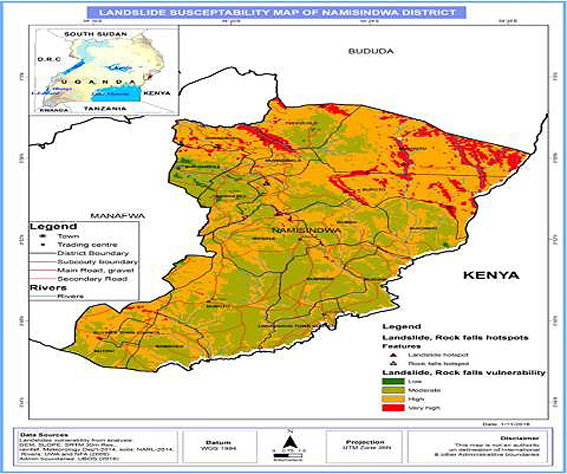 1.32 The killer flooding and landslides is not a new disaster in this country, you will recall on 1st March 2010 a landslide disaster in Bulambuli District claimed the lives of over 150 people and displaced over 5,000.

1.33 Cabinet then directed two solutions (1) resettlement of the survivors in part of the Refugee settlement land in Kiryandongo and (2) long term solution for those at risk of future landslides.

1.35 In 2011, a standing Cabinet Subcommittee headed by Rt. Hon. 1st Deputy Prime Minister and Deputy Leader of Government Business in Parliament Gen. Moses Ali was appointed by Cabinet to established the population at high risk of landslides in the districts of Bududa, Sironko, Manafwa and Bulambuli.

1.36 The committee together with technical officers after three weeks of field work established that close to 100,000 people were at high risk of landslides and recommended their relocation to safer places, giving Bugisu sub region priority.

1.37 A ten year resettlement project for the 100,000 people (12,500hh) at risk of landslides was drawn and approved by Cabinet. It was entitled, ‘RESETTLEMENT OF LANDLESS PERSONS AND PERSONS AT RISK OF LANDSLIDES.' The project was supposed to be implemented in a phased manner with on average 10,000 people each year.

1.40 Implementation of the resettlement plan only resumed in November 2018, following a directive from H.E.The President and after another landslide had killed 53 people in Bukalasi subcounty of Bududa District.

1.41 The Engineering Brigade of UPDF, together with the Constructions Unit of the Uganda Police Force and the Mechanical Unit of Uganda Prison Services have managed to construct 241 houses of which the first 101 have been occupied and the 140 are at completion stages.

1.42 If the eight years of negative political mis-guidance had not occurred, by now the challenges of landslide would be minimal in Bugisu subregion.

1.43 This Bulambuli Resettlement Project is being implemented in three phases and will take a total of 7,200 people in 900 houses at its completion in June next year.

1.44 After the Bulambuli Project which is being implemented on Government land; the subsequent resettlement strategies will include identification and procurement of land for resettlement in safely locations within the districts of Bududa, Manafwa, Namisidwa, Sironko and Bulambuli. And in situations of places of high population densities and no land for purchase at subcounty level, the people at risk in such areas will be consulted and upon agreement be relocated to other parts of the Country.

1.45 The beneficiary families of the Bulambuli project, have each receive a permanent two-bedroomed house made of concrete blocks and iron-sheet roofs of gauge 28, sitting on one acre of land, piped water, solar and hydro power lighting.

1.46 The purpose of this media statement is to enable me appeal to the media, Hon Members of Parliament especially those from the most affected subregions of Bugisu Teso, Bukedi, Kigezi, Rwenzori, Lango and West Nile; Cultural Leaders, Opinion Leaders and all persons in leadership positions to convince our people to:

a. Desist from crossing walking across flooded sections of any road or bridge

b. Not to allow boda-boda riders and vehicle drivers carry them across sections of flooded roads and bridges

c. Shift from their homes located in risky steep slopes especially in Bugisu subregion to homes of relatives, friends, Churches, Mosques and School buildings, as a temporary emergency safety measure.

d. Government will continuously provide them with relief food while at those places of safety as it has done in the past. The above-normal rains are expected to subside within the next three weeks, i.e by end of December 2019, and people can then after begin going back to their homes.

1.47 On behalf of the Government, I convey condolences to families who have lost their dear members.