The Buganda Kingdom has signed a sh560m partnership with dfcu Bank that sees them become the gold sponsors of the Kabaka Birthday Run.

For the next three years, the run will undertake a new theme: ‘Men against AIDS to save the girl child', with dfcu Bank and the Buganda Kingdom taking a major step in the fight against HIV/AIDS.

On Wednesday, the bank's CEO Mathias Katamba who was in the company of Head of Marketing Jude Kansiime and Communications and Events Manager Rukh-Shana Namuyimba signed an agreement with the business arm of the kingdom-the Majestic Brands before he presented the cheque at Bulange. 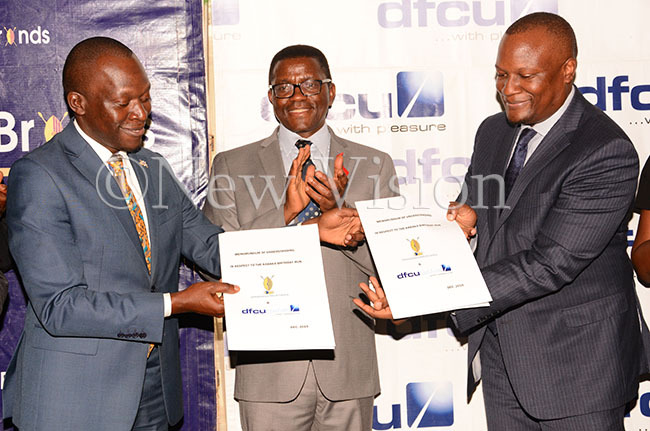 "In order to address challenges related to HIV/AIDS management, there is a need for more collaborative effort to drive awareness and testing. Partnerships such as the one we are announcing today with the Buganda Kingdom is a great opportunity for dfcu to demonstrate its commitment to the wellbeing of the communities in which it operates," Katamba said.

"It's also an opportunity for each one of us who will take part in the Annual Kabaka's Birthday Run to be part of the solution to HIV/AIDS in Uganda.

"This year, over 50,000 took part in the Kabaka's Birthday Run placing it among the top five marathons in Africa. With causes such as these that impact the community, we are optimistic this annual event is only going to grow bigger and more impactful. And dfcu is proud to be a part of that," Katamba stated.

"Partnerships such as these will ensure we create a sustained understating that testing for HIV is an essential gateway to HIV prevention, care, and treatment.

"This is directly in line with the Joint United Nations Programme on HIV/AIDS which seeks to achieve the 90-90-90 global target by 2020," Katamba remarked.

The Katikkiro welcomed the bank onboard noting that the Kabaka's run was more than celebrating another year in his life but it is also a celebration of Buganda's heritage on top of focusing on the well-being of the people.

"Health is extremely important because everything starts with a good life and it is an absolute pleasure that the reason for which dfcu is joining us is that we share this vision in as far as the well being of the people is paramount especially in the area of good health," Mayiga stated.

He hailed the bank for the partnership that will ensure that the kingdom becomes stronger because the kingdom wants to achieve immensely. 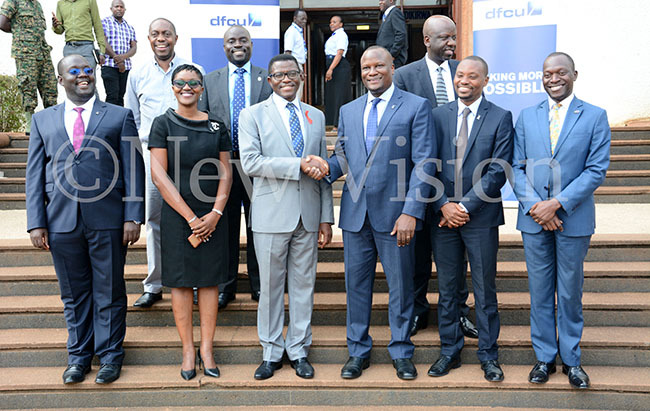 The Katikkiro of Buganda Charles Mayiga (center) poses with dfcu Bank officials and Majestic Brands officials after dfcu handed over a sh560m cheque towards the Kabaka Birthday Run, Dec 4 2019.

"It is very gratifying that dfcu is joining us in this good cause to fight and banish HIV/AIDS out of this country.

"As you know the Kabaka is the good-will ambassador appointed by UNAIDS and it is a task that he has embarked on with a lot of energy and picking the cue from him we must all fight HIV/Aids because we have all been affected in one way or another but it is not easy to fight it alone the reason we have to come together,"

He said the partnership will bring happiness to everyone in the country before he thanked Majestic Brands for bringing on board several partners for the kingdom.