Museveni rallies leaders to ramp up fight against corruption

"I have never stolen anything from anybody. And I am also not a poor man," says the President, adding that corruption is a moral, spiritual and material problem.

"I have never stolen anything from anybody. And I am also not a poor man," says the President, adding that corruption is a moral, spiritual and material problem.


KAMPALA - President Yoweri Museveni has rallied Ugandan leaders to intensify efforts into the fight against corruption, saying that the vice is a moral, spiritual and material problem.

"It is a moral problem because you make yourself a parasite. Corrupt people are parasites because they get wealth which they did not earn," he said at Kololo on Wednesday during an Anti-Corruption Walk ceremony.

Spiritually, Museveni added, corrupt people are bad investors "because they think that God does not see the bad things they do".

"In the last 60 years, I have been watching and I have not seen these corrupt people being successful sustainably."

Joined different government agencies, religious, traditional, civil society leaders and fellow countrymen in the #AntiCorruptionWalk. I am very glad we turned up in big numbers as we continue the war towards a #CorruptionFreeUganda. pic.twitter.com/795fjkZsqX


The President was addressing thousands of people gathered at Kololo Independence Grounds, as well as the rest of the nation, after leading a large group of people in a three-and-a-half-kilometre anti-corruption campaign walk from the Constitutional Square in the city centre to Kololo.

Government, religious, traditional and civil society leaders as well as members of the public joined the procession on a wet surface and under a grey mid-morning sky. 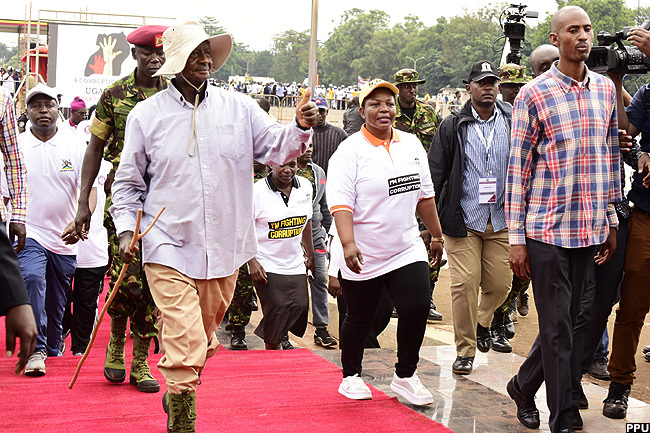 Earlier, Deputy Speaker of Parliament Jacob Oulanyah made reference to a biblical episode where Jesus challenged people who wanted to lynch a suspected thief to cast the first stone. Here, Oulanyah was pointing out that everyone is corrupt.

"If we were to ask that same question this morning in this important meeting: 'Let he who has not practised corruption cast the first stone', we would be shocked at how many stones would fly in here," said Oulanyah.

"Mr. President, we are all corrupt," underlined the Deputy Speaker, who represented Speaker Rebecca Kadaga.

But in his response later, Museveni said he would be among those that would throw the first stone.

"I have never stolen anything from anybody. And I am also not a poor man," said the President. 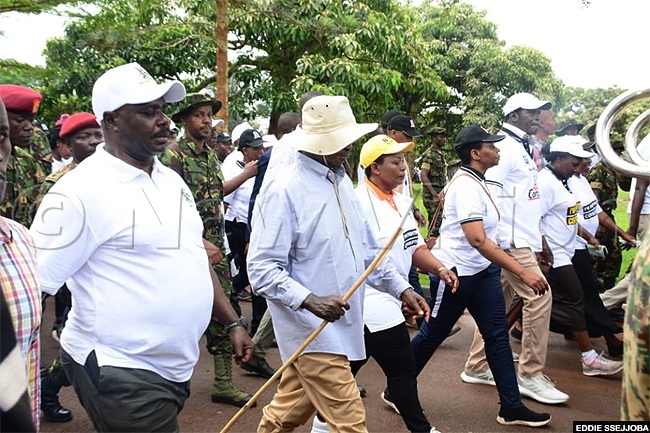 'Recruit people on basis of integrity'

He said there is also a material basis for corruption. "Therefore, we the political leaders should arrange the economy in such a way that our people get out of material need, because if people do not have jobs and income, the temptation is high.

"We must help everybody who is able. We should work to make sure our people get jobs and they get wealth. The job and wealth sectors are four: commercial agriculture, industry, services and ICT," said Museveni.

"Therefore, especially the political, administrative and judicial leaders, in order to create a material base for our people to get out of acute need, we must support the expansion of these four sectors.

"Anybody who delays a project in agriculture, in industry, in services, is indirectly an enemy of the fight against corruption. Let us develop our economy and then we can preach on the moral side and spiritual side - but having addressed the material side of the human needs.

"The laws are in place. The problem is with the implementation,"said the President.

"And I think the mistake was in the recruitment into the office of the IGG [Inspectorate of Government], Lt. Col. Edith Nakalema's office [State House Anti-Corruption Unit] and URA [Uganda Revenue Authority] - don't recruit people there on the basis of paper qualifications. Recruit people on the basis of integrity," he added.

A word of thanks from the host of the #AntiCorruptionWalk Lt. Col. @edthnaka, to all those that have joined us today for the walk on the fight against corruption.#CorruptionFreeUganda #EndCorruptionNow pic.twitter.com/1LhzvolEDi


Another problem of corruption is supervision, said Museveni. "These units are not supervised. Like the Police, there has been poor supervision and poor tasking.

He talked of a case of a school owner who was alleged to have defiled a school child and when the case was reported to Police, "they wrote 'indecent assault'. They changed the whole thing. The fellow got [bond]".

That when Museveni read the story in the media, he contacted a unit in the special forces to investigate further, and "when we went in, we found a lot of things".

Besides supervision, the President urged agencies to use the public because "they have a lot of information".

"We are going to open this war [against corruption]. I will follow up with the DISOs in the sub-counties," said Museveni, who urged agencies to be thorough in investigations.

Meanwhile, in his remarks, Chief Justice Bart Katureebe underlined the Judiciary's commitment to kicking out graft, saying "a corrupt-free Judiciary starts with me".

His commitment was thus:

"On behalf of the Judiciary, and on my own behalf, do hereby pledge that the Judiciary will adhere to the following commitment as we administer justice in the execution of our duties.

1. To be honest and ethical in all our dealings

2. To provide timely services to the people of Uganda

3. To refuse to elict or accept any bribe

4. To ensure zero tolerance for corruption

"Your Excellency, I would like to assure you that from today, the Judiciary recommits itself to act always in accordance with the law and the Constitution and the rules of justice and fairness."

I come here bse of a public show but deep down I know that we will all go back to practicing corruption
I dare you to challenge me in that @JacobOulanyah
No truer words #AntiCorruptionWalk pic.twitter.com/BEFRg9Q8WE


Representing the Parliament, Oulanyah also made a similar recommittal to the fight against corruption.

"I, Jacob L'Okori Oulanyah, Deputy Speaker of Parliament of Uganda, on behalf of the Parliament and on own my behalf, do hereby pledge that Parliament will adhere to the following commitment in the execution of our duties.

1. To be honest and ethical in all our dealings

2. To provide timely services to the people of Uganda

3. To refuse to elict or accept any bribe

4. To legislate all government contracts with integrity

5. To ensure zero tolerance for corruption"


10:27am |   Fight corruption: Lokodo thanks President for support

In his remarks, the Minister of Ethics and Integrity Fr. Simon Lokodo has thanked H.E @KagutaMuseveni on behalf of all Anti-Corruption agencies for the continuous support he has extended to them.#AntiCorruptionWalk #CorruptionFreeUganda #StartsWithMe#EndCorruptionNow

Ugandans have decided, they have opened up,they have made up their minds,they no longer need corruption within and around its borders and all have walked being led by the president @KagutaMuseveni #CorruptionFreeUganda #AntiCorruption #EndCorruptionNow pic.twitter.com/PbMP4kTNtM

Here is the mood at Kololo Independence Grounds, where the Anti-Corruption Walk ceremony is taking place. 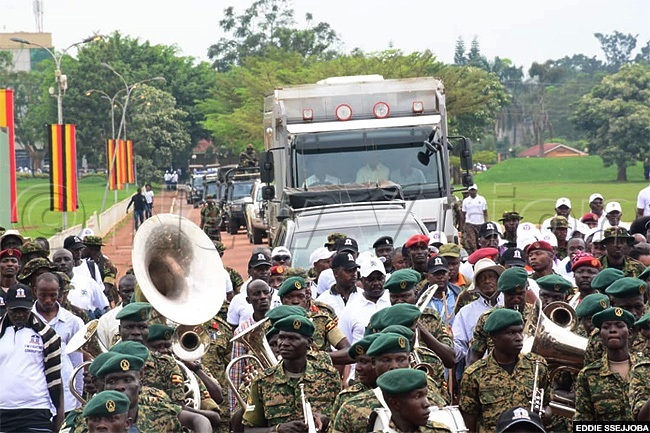 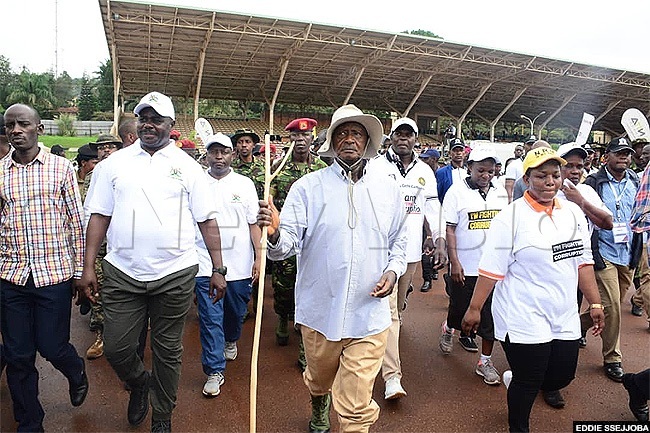 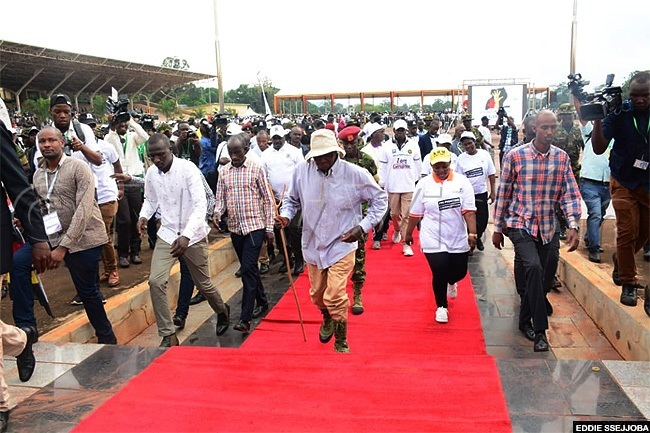 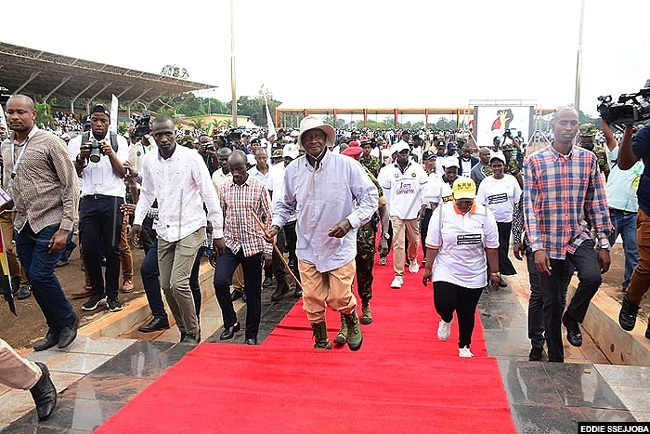 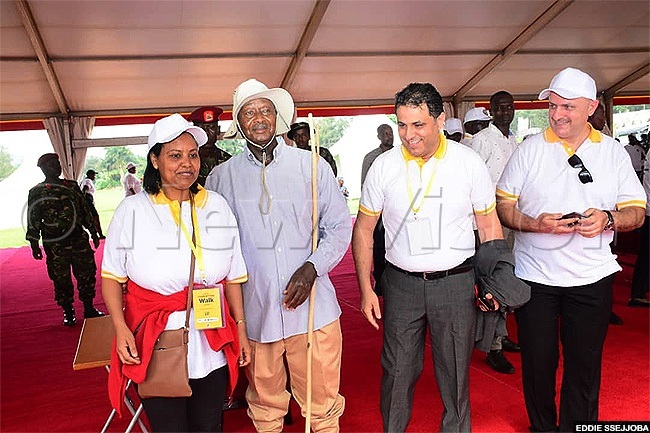 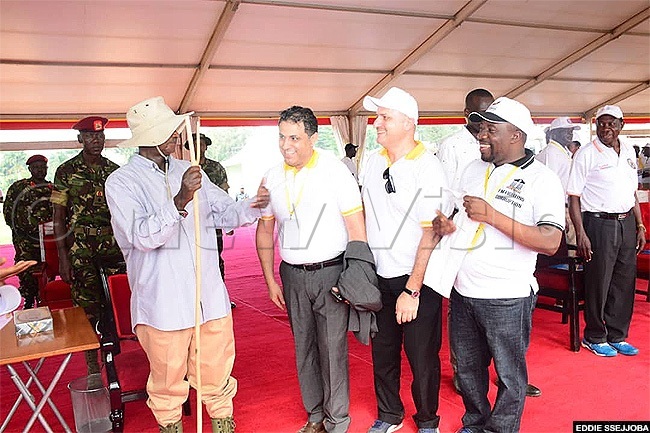 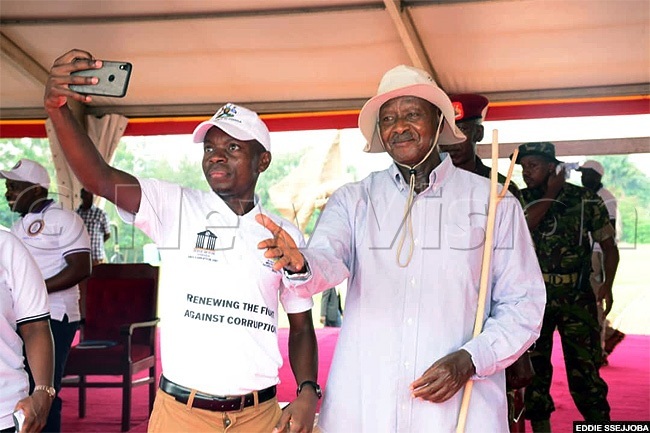 President Museveni has walked a distance of roughly four kilometres from the Constitutional Square in the heart of the city to Kololo Independence Grounds. He has been joined by government, religious, traditional and civil society leaders. Members of the public also joined the procession. 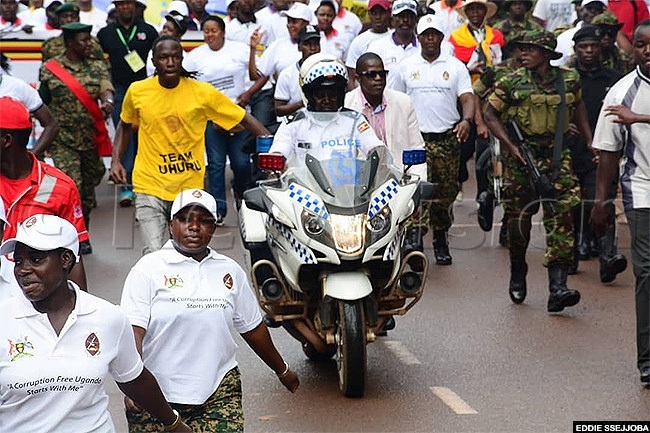 President Yoweri Museveni is leading the country in the walk to highlight the gains made so far in the fight against corruption. He is also expected to announce government's plans to stem the vice going forward.

The walk has been held under the theme A corruption-free Uganda; It starts with me. 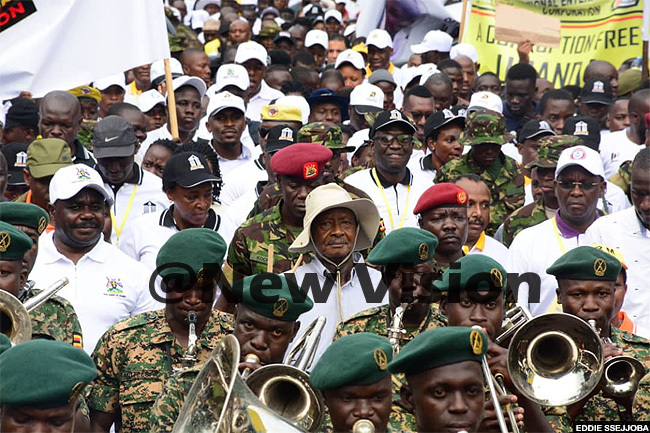 It is a packed passage to Kololo, thanks to the walking human traffic. The weather is kind. 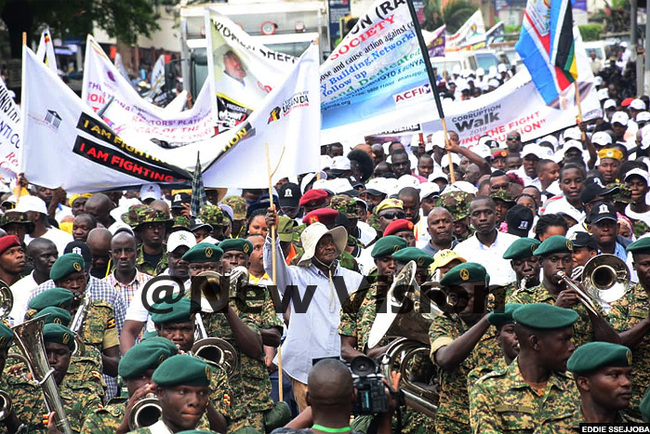 
8:50am |   Marching united against corruption

Various bands are animating the walk on a slightly wet Wednesday morning. 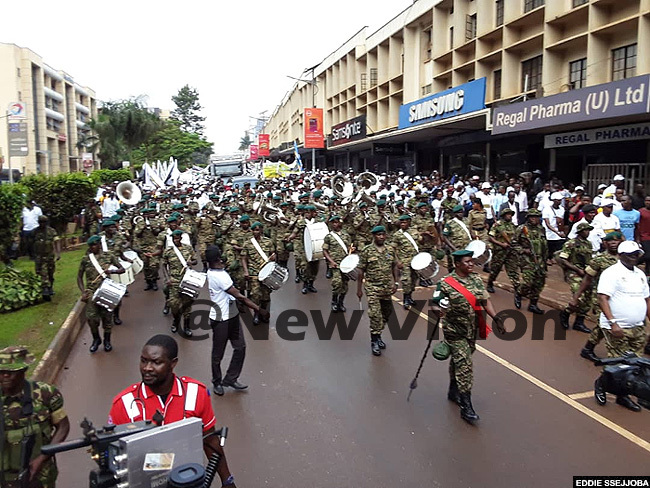 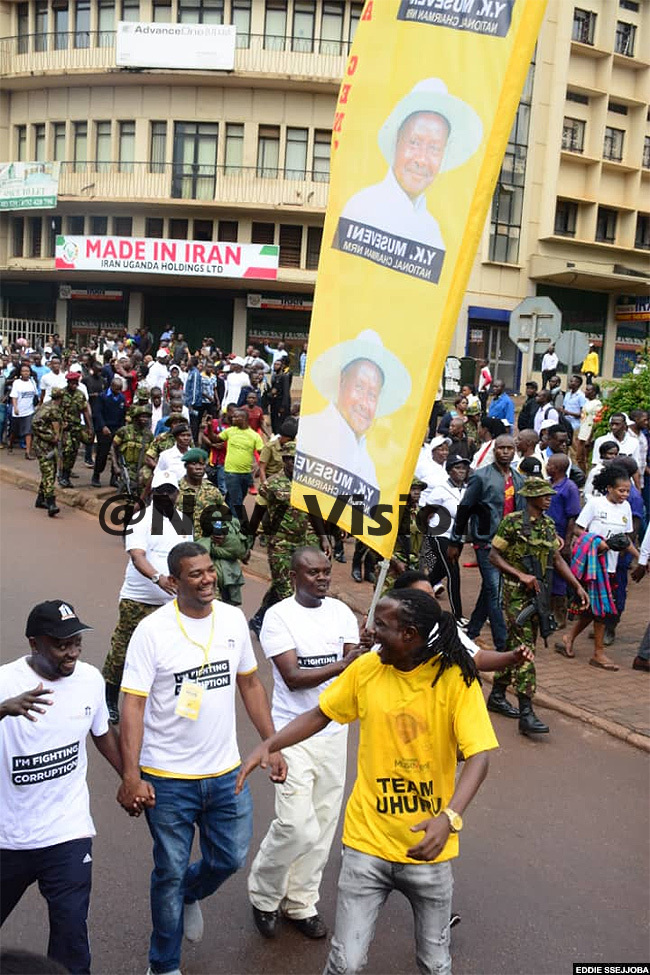 President Yoweri Museveni is leading the walkers from The Square to Kololo Independence Grounds. The Deputy Speaker of Parliament Jacob Oulanyah was close by as they set off from The Square. 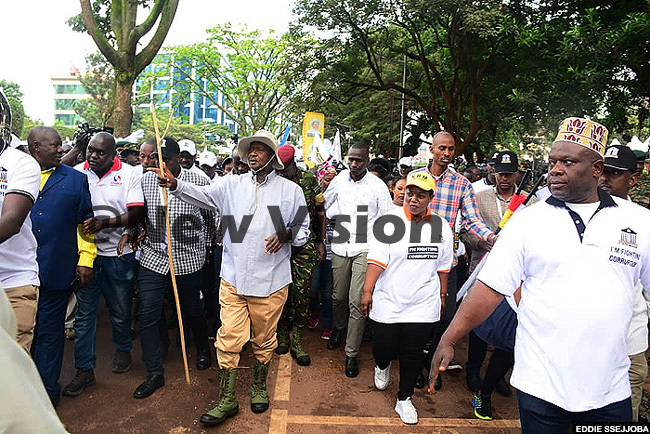 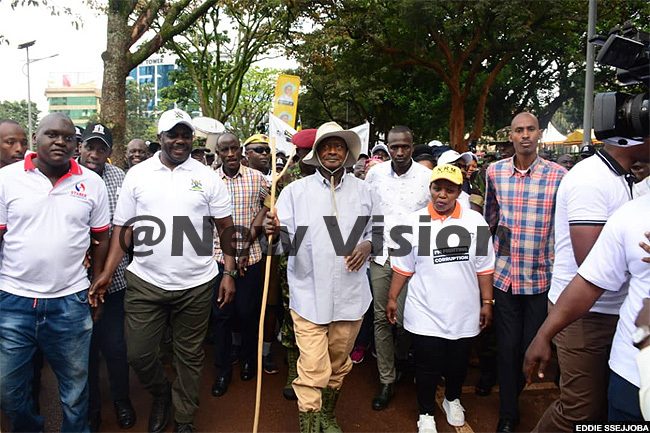 But first, participants had to undergo some warm-ups earlier. 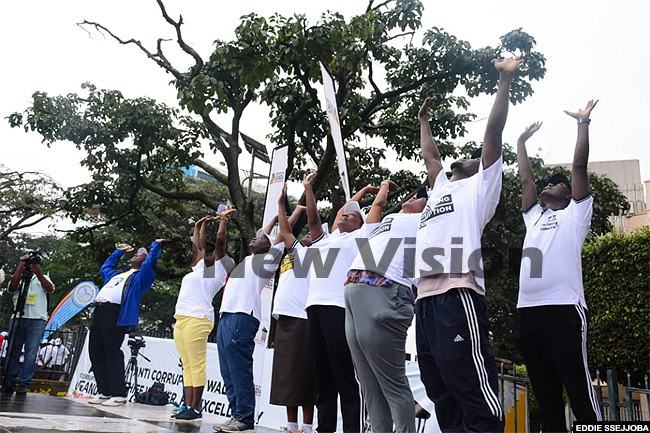 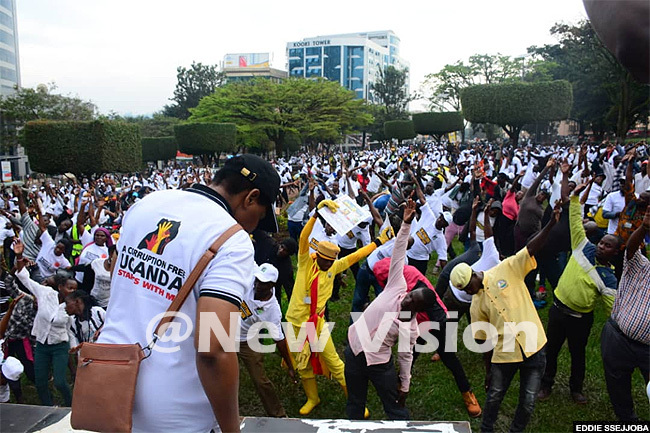 Guess by now you have already taken your body through some early morning walking drill.

Or your bones through some paka chini . . . 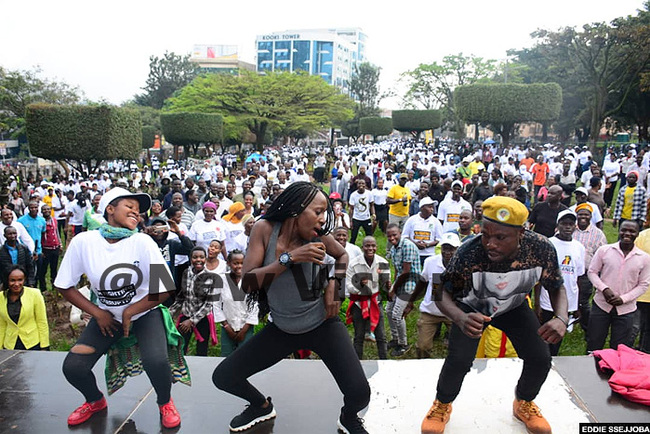