Stop harassing us in public places-girls cry out

They complain that it has become a habit especially in urban centers for men to sexually harass girls and women.

Faridah Kimbowa (center), chairperson National Women's Counci posing for a photo with youth from Plan Internationa Uganda after attending the launch of the 16 days of Activism Campaign against gender-based violence at Imperial Royale Hotel, November 25,2019. Photo by Eddie Ssejjoba

They complain that it has become a habit especially in urban centers for men to sexually harass girls and women.

Many girls have complained against men who they accuse of sexually harassing them while in public places by touching their breasts and other sensitive body parts.

They complain that it has become a habit especially in urban centers for men to sexually harass girls and women, which has forced many to shun such places to avoid embarrassments. A young man from the Safer Cities Project of Plan International Uganda displays messages to boda boda cyclists along Wampewo Roundabout in Kampala as part of the activities to mark the launch of the 16 Days of Activism Campaign against gender-based violence. Photo by Eddie Ssejjoba

Nalumansi Faridah, a young activist from Plan International Uganda said that a big number of men were ignorant of the rights of girls and women and have continued to abuse them.

She said men intentionally block them, pull their hands, touch their buttocks and breasts and in addition ‘throw' vulgar and sexual insults at them intended to humiliate them.

She mentioned places where the habit is becoming rampant including taxi parks and stages, markets, shopping arcades especially in narrow corridors, entertainment places like music concerts, among others.

"Some of us move with our fathers and uncles but these men humiliate us by referring to us as having either made wrong choices or that the age is inappropriate for sex. We feel uncomfortable and always humiliated," she said.

Nalumansi was speaking to journalists during one of the activities of the 16 Days of Activism against Gender-Based Violence (GBV) when she joined other youth from Plan International Uganda to raise placards calling for an end to violence against girls and women.

The campaign was launched on Monday at the Imperial Royale Hotel in Kampala under this year's global theme; ‘Orange the world: Generation equality stands against rape'. 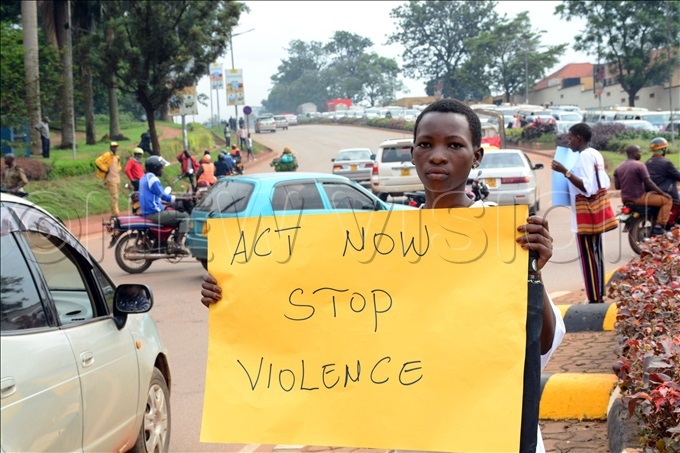 A young woman from the Safer Cities Project of Plan International Uganda displays messages to motorists and cyclists along Wampewo Roundabout in Kampala as part of the activities to mark the launch of the 16 Days of Activism Campaign against gender-based violence. Photo by Eddie Ssejjoba

16 Days of Activism against Gender-Based Violence is an international campaign that rallies activists, non-governmental organizations (NGOs), governments, the private sector, leaders, academia and other stakeholders across the world, to demand an end to gender-based violence.

"Many of our colleagues have decided to avoid some places where men harass them, others have dropped out of school when they are bullied by boys because of their looks, which we feel must end," she said.

Nalumansi, however, appealed to fellow girls to start speaking out against such habits and avoid keeping quiet.

"We are using the 16 days of activism to openly tell men that it is wrong and must know that we feel uncomfortable about it. Girls should stand firm because change starts with them," she said, adding that the women have a right to shame men who abuse them.

Angella Nakalyango from the same organization appealed to the government to implement laws about sexual assault so that culprits are severely punished.

"We (girls) need safe public places where we can be free from sexual assault and violence. Men must respect us the way we respect them".

"Men must know sexual harassment does not stop at rape, it includes vulgar words thrown to us while on Boda bodas, markets and other places," she said.

Nakalyango said she once complained when a man touched her breasts although the man shouted back at her saying it was a normal thing which she must admit and behave like other women who just ignore and keep silent.

"We demand that women should be respected and men must avoid touching our body parts because they too will not feel good if anyone touched their secret parts," she explained.

However, Yasin Bbira, a boda boda cyclist at Gaba Stage in Kampala said that as much they demand their rights, women should as well respect themselves and their rights.

"Women in most times have harassed themselves by engaging in de-humanizing acts like lining up on the streets of Kampala waiting for men to pay for sex.

"I ask the government and NGOs to visit the streets of Kampala at night and see how women behave when they want men to pay for their sex. They are so aggressive and forget that others are busy fighting for their rights," he said.

He said it is through prostitution that HIV/Aids has become a big problem in the country.

"I appeal to girls who have started campaigning against violence, to tell their colleagues to stop engaging in prostitution, it is becoming a problem especially in the spread of HIV," he said.