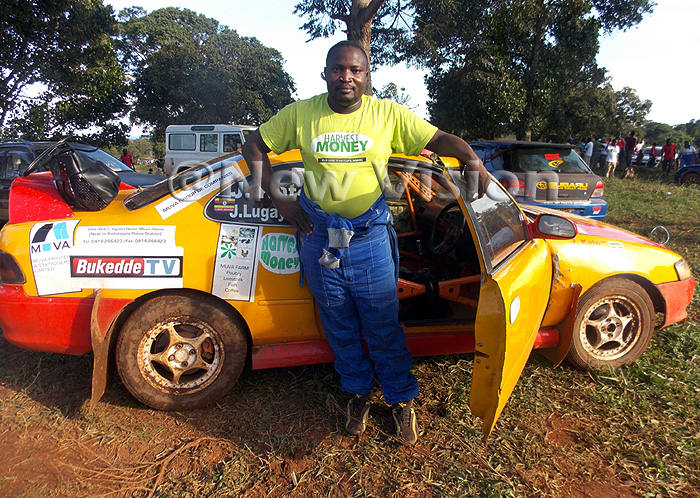 Motor rally contests are an exciting adventure. For the fans, it is a beautiful, exciting spectacle. For those in the driver's seat, however, it is a different kettle of fish; full of bumps and humps, false starts and several surprises. Joshua Kato, a New Vision journalist and rally driver, shares his experience behind the wheels of a rally car with his navigator Japheth Lugayizi. What is it like to be in the cockpit? 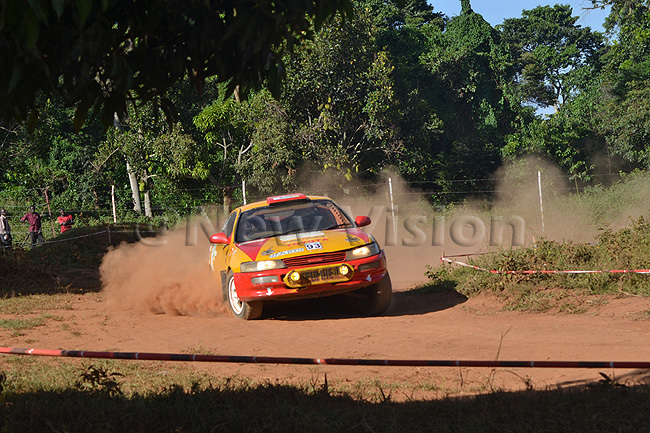 
I first drove a rally car in 2012. I mainly did sprints (short circuits) in Lubiri, Garuga, Busiika and Festino, plus a few route openings and ‘sweepings'. By 2016, I had done about 15 events, driving mostly two-wheel drive (2WD) cars. I have done quite a few since.

My experience driving a rally car is one of adventure, trepidation, great fun and risks. 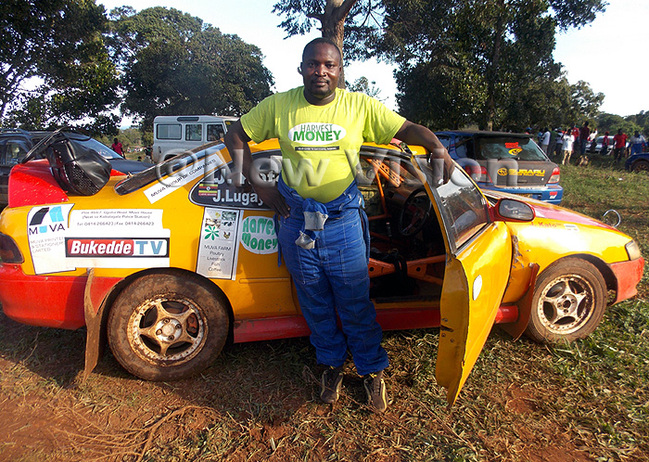 Joshua Kato stands by his rally car. (Credit: Johnson Were)

It is a navigator's world

Don't be fooled by the driver. It is their co-driver - the navigator - that controls the rally car.

The navigator is the difference between success and failure - overshooting or even rolling over. If they are bad, then the driver becomes bad too.  Good navigators even determine which gear a driver should engage at a given time, when to use the hand brake and when not to.  They determine the speed of the car at a given time and section too. 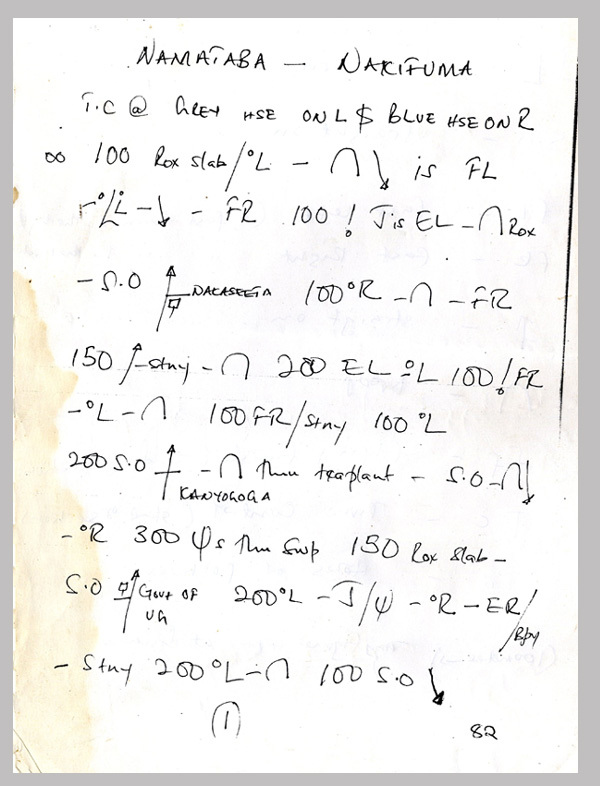 As a driver, your role is to listen and implement the navigator's instructions. This calls for patience and alertness. If you miss their instructions, they might scream at you. It can sometimes get frustrating - even annoying. But you hang in there. Lest you lose.

Tense moments in the driver's seat

In the video below, I negotiate the Nsimbe rally with my navigator, Japheth Lugayizi. The year was 2016. You clearly hear Lugayizi telling me to listen to what he says.

"Bwenkugamba 'calm down', wuliriliza ("When I ask you to calm down, please listen"). Of course, the adrenaline rises the moment you take the bucket seat behind the wheel. But you need to listen to the navigator if you are to complete a race.

One particularly tense moment during this race was at a pothole-filled T-junction surrounded by spectators. It was tough. The car speed rose to over 100km per hour.

Lugayizi became jittery. He told me to shift down to gear number 2 and pull the handbrake. Indeed, I pulled it but a bit harder. The car did a 180-degree turn to the left, and another to the right, before correcting into a long straight for about 150 metres.

It then slowed down. 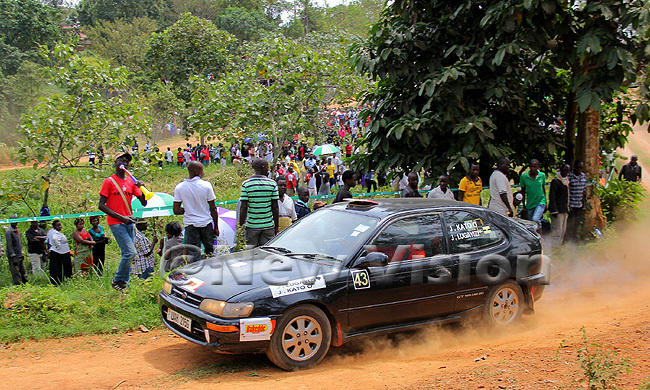 Kato in action. (Credit: Johnson Were)

The track - approximately 7.5km - had everything to test the will and zeal of a rally driver. Because the first kilometre was on grass and I did not have standard rally tyres, I had to drive with a lot of caution.

The rest of the section had potholes filled with muddy water, which sometimes hit the windscreen and blurred my view. The first run had gone on well until the car sucked in water and the engine stopped.

We lost three minutes trying to re-start it. When it did, the car following us had reached our tail. For the rest of the section, we raced on as it followed us. We had gained some distance before overshooting the turn into the grass. 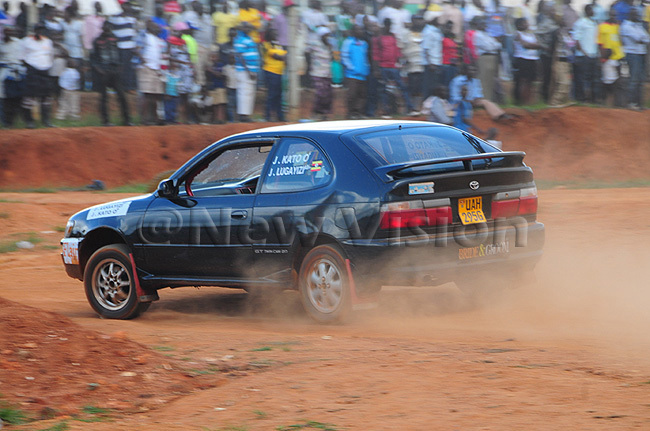 If you listen carefully, you hear Lugayizi, my navigator, barking out instructions. He reads from calligraphy-looking inscriptions used in motor rally races. These are called pacenotes.

Pacenotes are made by crews during recceing. Drivers make their notes according to their personal abilities and those of their cars. For example, faster drivers will record a slow left as an 'Easy Left' and vice-versa. 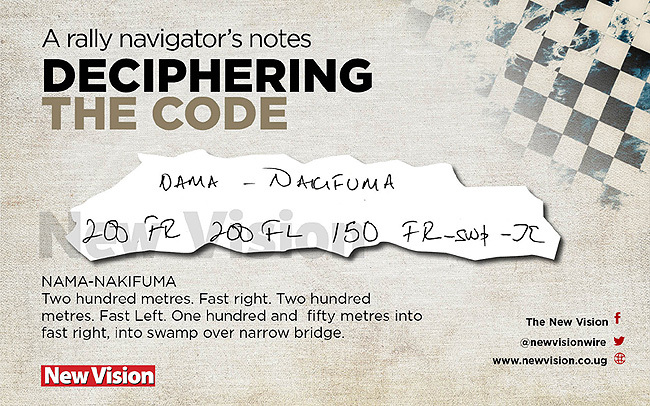 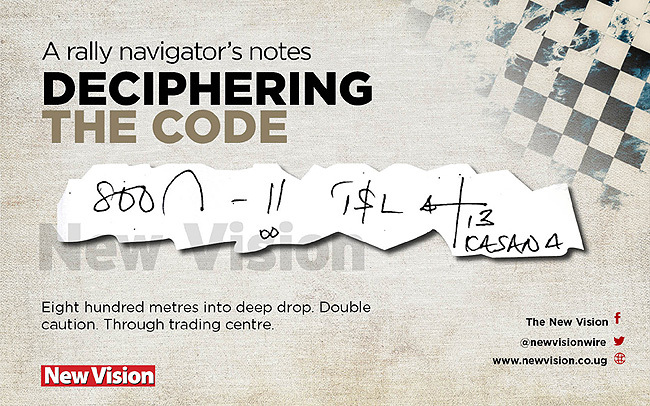 An ‘Easy Left' (EL) for a four-wheel drive (4WD) car, such as most Subarus and Mitsubishi Evos, is a ‘Slow Left' for two-wheel drive (2WD) cars, such as the Toyota FX, Run X or Starlet.

Some 2WD drivers are known to use pacenotes drawn by 4WD crews. However, they must do it carefully. 4WD cars take corners much easier because they get extra grip, thanks to the power in all four of their wheels, while 2WDs have power in only two wheels and tend to lose power and grip more in corners the "Triple Caution" warning is common in rally driving. This is a situation on the road where the driver must drive carefully and reduce speed. It may be a huge hump or a set of potholes. 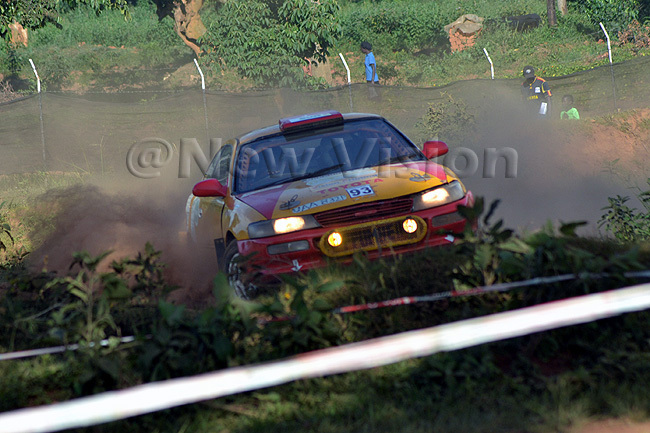 It is difficult, nerve-wracking and stressful, but above all, rally driving is fun. 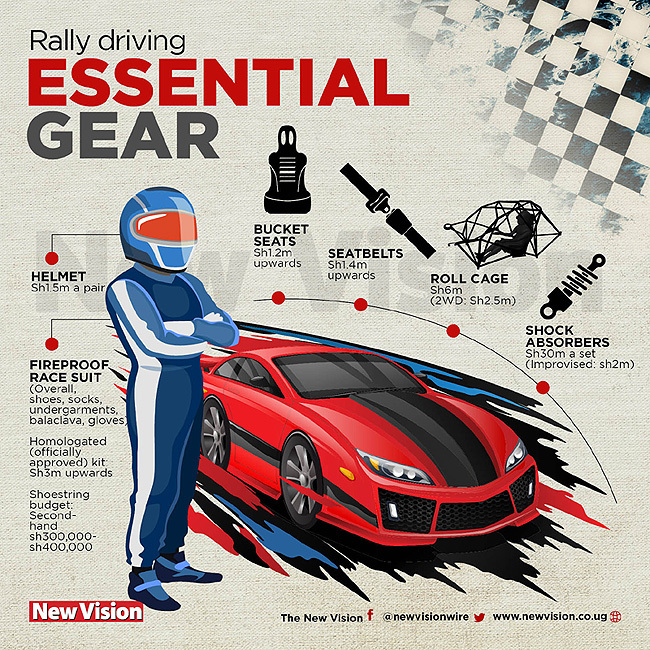