To be truthful, "Y+ Beauty Pageant" grand finale last Friday was the greatest event to have happened in the circles of young people living with HIV/AIDS, and also  in Kampala. It was a lovely evening of glitz and fascination, but it was amazing how awareness and self-consciousness stood out.

You could see the strength and charisma in the fashion, dance and celebration as eighteen HIV positive finalists from auditions held from different regions countrywide, mainly students, gyrated their way down the catwalks at Sheraton hotel to elect the national queen and king (2019/20).

The event,  under the theme; "Beauty with Zero discrimination," saw Esther Kabasambo from Kasese  and Micheal  Ssenyonga also from Kasese, crowned MissY+  and Mr. Y+ beauty pageant,  thus becoming the national ambassadors to lead the fight against stigma and discrimination in their communities, workplace, schools, and global platforms.

Chief Guest, Dr. Maxime Houinato, UN Woman Country Representative, hailed the winners, saying they could not have had better choices than Ssenyonga and Kabasamba. "They exhibit exceptional brains, confidence, eloquence and knowledge and information on HIV and AIDS issues affecting young people. Indeed, they can drive the theme of "zero stigma," she said.

She also acknowledged the support that different Development partners have continued to commit and fulfill towards eliminating HIV&AIDS in Uganda, adding that Uganda is a model country in the fight against the pandemic.

Kabasamba expressed her happiness for a platform that she said was going to take her to greater heights, to enable her to touch so many peer's lives at the university and also deep down in villages of Kasese where she hails from.

"As the national Miss Y+, I am going to work closely with the Uganda Network of Young People Living with HIV/AIDS (UNYPA), to ensure that I reach the young people who are not yet on board, those living in denial and those who are not adhering to their medication," she said. 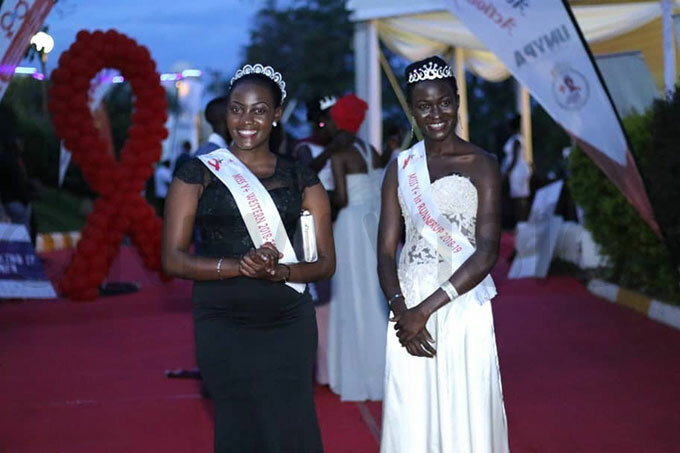 Ssenyonga who gets his medication from Kirembe Mines said she didn't expect to win because of fear. Before he left Kasese for Kampala for the contest he was told that there was no way he was going to outmatch contestants from the central region, who are formidable.

"My colleagues instilled a lot of fear in me. When the judge called my name, i thought she had made a mistake. I thought I had not heard properly when my name was pronounced as an overall male winner," he said.

Ssenyonga was born with the virus, and he was inspired to take part in the contest after being a victim of stigma, and living a solitary miserable life after the death of his father. He was forced to go to the streets.

He was later picked from the streets by his grandpa, Asiimwe, who helped him out and took him back to school. Now that he is an ambassador, he is going to spread the gospel of de- stigmatization to his peers, especially the adolescent and those living with HIV, to encourage them to take their drugs, and encourage those who are positive to remain so.

This was the 6th Edition of the Y+ pageant, courtesy of Uganda Network of Young People Living with HIV&AIDS (UNYPA) in conjunction with UN Women, UNAIDS, Spotlight Initiative, Frontline AIDS, AidsFond International, Local and Global partners, among others.

Nicholas Nuwagaba, the executive director, UNYPA, said it was not a celebration of HIV, but a way to kick out self and external stigma among young people who are infected with the HIV virus, to encourage them to live positively.

Niwagaba said young people continuously face frustrations that come from stigma and discrimination from families, schools and the general public, which in the long run affects their uptake of HIV services from health centers and adherence.

"They then become fearful to disclose their status. UNYPA, therefore, uses the Y+ Beauty Pageant as a tool to uplift the plight of young people living with HIV, re-echo their voices and work together with partners to build a strong, energetic, creative, and productive generation," he said.

Speaking on behalf of the government, the Director-General of Uganda AIDS Commission Dr. Nelson Musoba attributed the encouraging drop in the HIV prevalence rate to initiatives like the Y+ pageant.

"Currently the HIV prevalence rate in Uganda is at 5.7% from 6.3%. It is a big improvement because more initiatives like this have made people know the need to test, protect themselves and to take up treatment if possible," he said.