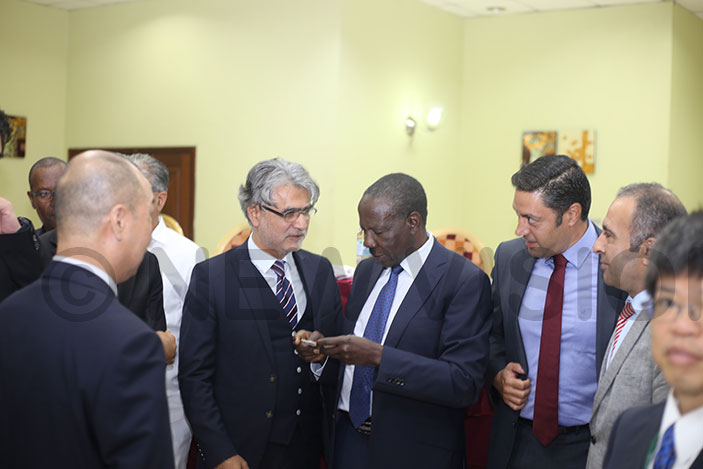 Kasaija said, the government has already put in place a number of incentives to attract both local and foreign investment in the free zones, as it aims to boost industrial production and value addition to the country’s raw materials.
TOP Business STORY
Mon Nov 25 2019 .
Kasaija asks private sector to invest in free zones

Kasaija said, the government has already put in place a number of incentives to attract both local and foreign investment in the free zones, as it aims to boost industrial production and value addition to the country’s raw materials.

Finance minister, Matia Kasaija has compelled the private sector to diversify their investments into the free zones, created by the government to accelerate export-led industrialisation.

Kasaija said, the government has already put in place a number of incentives to attract both local and foreign investment in the free zones, as it aims to boost industrial production and value addition to the country's raw materials.

He said investment in the free zones would also augment the country's current account position, currently estimated at about $ 2.762b deficit, and create numerous jobs for the country's largely youthful population.

"Government has put in place a number of strategies aimed at increasing export growth and diversity, to attract investors through the provision of both tax and non-tax incentives. I urge you, therefore, to take advantage of these to expand your businesses, create more jobs and ultimately contribute significantly to the growth of the economy", he said.

This was during stakeholders meeting with members of the private sector from Uganda, Turkey, Ireland, Tanzania, Kenya, and China in Kampala on Tuesday.

A free zone is a designated area where goods are regarded as being outside the customs territory, as far as import duty is concerned.

It usually takes the form of manufacturing or processing facilities, science and technology parks or even a tourism development zone.

He said investors who manufacture from within the parks will be exempted from import duties for raw materials, and will also benefit from unrestricted remittance on profits after tax.

He said investors will additionally enjoy tax holiday for 10 years on finished consumer and capital goods and 100% exemption from tax on income from agro-processing.

He said these incentives will allow investors to produce and process large quantities and better quality goods at a relatively competitive lower cost for the export market.

He said in the process, this will promote export growth and diversification by creating forward and backward linkages, enhance technology transfer and skills development, accelerate economic growth, facilitate job creation, as well as boost investment.

According to the World Bank, Uganda's export performance is still among the lowest in the world, even though there has been a marked increase in the growth of exports over the last decade.

The overall balance of payments position for the country has been negatively affected by the poor performance of exports, which has led to a week shilling against the US dollar.

UFZA's Executive Director, Richard Jabo said the authority is currently in the process of building a public Free Port Zone at the Entebbe International Airport and a Free Zones Logistics Hub in Jinja, where the private sector could partner to invest.

"The Authority has 5 acres at Entebbe Airport and 20 acres in Jinja Industrial Park. The feasibility studies of these key projects are in the final stages. Therein lies opportunities that the private sector can exploit." He said.

He said investors would enjoy economies of scale resulting from well-planned zoning and clustering of the business activities in Free Zones.

He said they would also enjoy business facilitation and aftercare services in the acquisition of secondary licenses, permits and approvals from other government agencies.