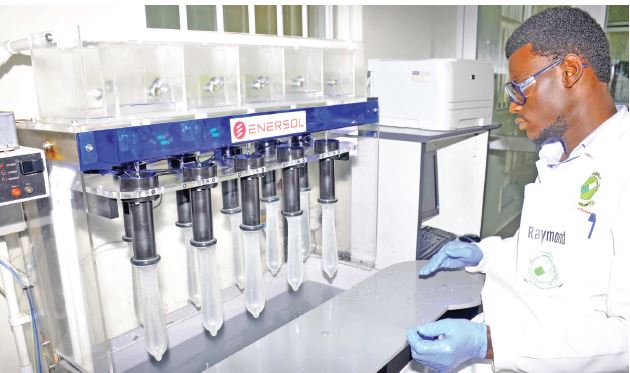 A Laboratory technician testing condoms before they are packed for the market at Mulago recently. Photo by Wilfred Sanya

Ugandan men have been urged to know their condom sizes. This follows a notice from the National Drug Authority(NDA) last week recalling two batches of Life Guard condoms, after failing safety tests.

The fear comes after fake condoms were found circulating on the Ugandan market. Marie Stopes Uganda, a nongovernment organisation that offers reproductive health services, was directed by NDA to recall two batches of Life Guard brand condoms from the Ugandan market.

The Life Guard condoms from batches 19040205 and 19050105, manufactured in April and May 2019 with expiry dates for March and April 2024, did not meet market standards. During a media tour of a laboratory in Mulago, we found chemists testing wet and wild condoms and Inno latex condoms (pink) from Thailand, which are supplied in different offices by the Government.

"We have observed that most men do not check the size of the condom and during the sexual act, these condoms burst or slip off, which is dangerous to their lives. For one to know the size that fits you, you have to try different sizes till you discover one that is comfortable on you," Dr. Ronald Lutasimbulwa from Mulago Hospital, said.

Lutasimbulwa noted that every condom has the size written on the cover. The smallest size is 42ml and the maximum is 56ml. "Different geographical locations have different sizes, Africans, especially Sudanese (Dinka) and Somalis use size 53ml and those from Asian countries use 48ml sizes," Lutasimbulwa noted.

Addressing journalists, David Nahamya, the NDA executive director, noted that it is not clear how the substandard condoms made their way to the market, where people buy them unsuspectingly. Investigations regarding unauthorised release of the substandard condoms onto the market are going on and the culprits shall face the law under the provisions of the NDA Act," Nahamya noted.

He also noted that the drugs body has retrieved 70% of the fake condoms and these were destroyed at Luwero Industries Limited in Nakasongola. Condoms cost sh500 and come in scented flavours of strawberry, chocolate, and vanilla. According to Wilberforce Kwiringira, the head of the National Drug Authority Laboratory, condoms are celebrated their dual role of being both a contraceptive method and a barrier against sexually transmitted infections, but one has to use them correctly and consistent.

"A faulty condom can increase the chances of HIV transmission and other sexually transmitted infections, so people need to be more vigilant when buying and using the product," Kwiringira said. Dangers of using fake condoms Since the bodies responsible do not know the manufacturers and the person who imports the fake condoms into the country, the condoms might be produced in unhygienic environments and contain harmful filler substances.

"Such condoms have contributed to the increase of sexually transmitted diseases, such as HIV, gonorrhea and unwanted pregnancies, we shall end up having unsafe abortions. And since commercial sex workers also use these products, the consequences could be enormous," Fred Ssekyana, the NDA spokesperson, said.