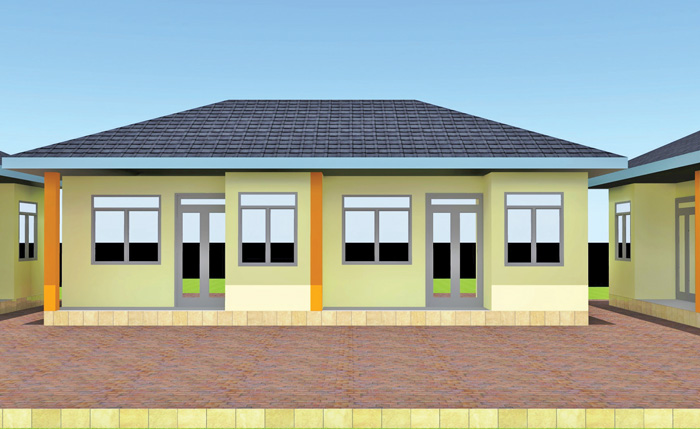 .
TOP Homes STORY
2 years ago .
Did you know you could build a house with sh7m?
A studio house is a suitable first home. It is economical, reasonable and good for bachelors.

While Kampala is experiencing rapid urbanisation, averaging a 5% annual growth, there is an even bigger national housing deficit of over 1.5 million, in spite of a permanent housing stock of 570,000.

This predicament has, however, played into the hands of landowners, who have reaped handsomely from investing in tenements and apartments for low, medium and high-income earners.

It is for this reason that Joseph Segawa, a resident of Matugga in Wakiso district, intends to invest in rental housing units. "I own a 50x70ft plot," he says. "I want to erect self-contained houses, but I need professional guidance on how to go about it." Segawa has set his eyes on studio apartments.

The most common plot size is the 50x100ft plot, but in some cases, one may also find a plot smaller than that. Constructing a house on a small budget is difficult, but achievable.

A studio house is a suitable first home. It is economical, reasonable and good for bachelors. David Kireli, a civil engineer, says if one buys a 50x70ft plot on the main road, it is wise to build rentals on it.

"Many people know that building near a road fetches good money in rent and sales. However, what most people forget is that it can be risky if one does not think about the road reserve," Kireli says.

‘‘The most important thing is to think of a road reserve before developing your plot because if you do not leave the mandatory two metres, you might lose your property," he advises. Frank Bbosa, a builder, says a studio house can be a moneymaking venture, but one must invest in a professional architect.

He says the estimated cost for each room depends on the location, plot size, and finances. However, for a 50x100ft plot, it is possible to have five or six units. Kireli says if a developer is interested in a studio or single room house, he or she must remember that it does not suit people with families.

"If you are to construct one, care must be taken not to burden the site by exceeding the acceptable space per person as stipulated in the public health regulations," he advises. Bbosa also says when one embarks on such a project, the layout, size, location, and appearance of one's plan influences the operations.

However, constructing a studio house must respect the zoning of the area. The needs for each unit. This lounge can consist of a sitting area of two seats and a small table. It also has a bed area, two shelves, of which one can be used as a wardrobe and another for the utensils. Another space can take a TV stand and music systems.

Muhammad Nsereko, a construction expert, says procurement of materials, digging the foundation, walling up to the windows, walling to ring beam, ring beam, procurement of roofing timber, roofing sheets, plastering, and shutters, among others, are all supposed to be budgeted for.

He says proper supervision of the project is important, right from the foundation stage to its completion. Nsereko says the area of this one-room maybe 20-25 square metres. The location determines the size of the rooms and the quantity of materials needed. l A simple design requires fewer columns.

It is easy for the contractor to build and takes a relatively shorter time to complete. You can also take advantage of the view. Locating windows on the side that has a good view will attract customers. l Use strong and durable materials, to ensure that the building stands strong for a long time.

To avoid shoddy work, each team member should understand and play their role efficiently.