Why Mutesa, Nyerere were not friends

That theme was chosen by the organisers, the Royal Commonwealth Society, which promotes Commonwealth charter values, such as conflict resolution, peace-making and democracy. At the above mentioned occasion, Prince Mutebi was in the company of John Nagenda (now the senior presidential adviser on media and public relations), and William Pike (an entrepreneur in Britain, Kenya and Uganda).

After his presentation, Nyerere walked around in the auditorium and shook hands with people that introduced themselves to him. Indeed, when Nyerere walked to where Prince Mutebi was standing, he (Prince Mutebi) courteously said: "Your Excellency, I am Prince Ronnie Mutebi from Buganda Kingdom." On hearing that, Nyerere just turned on his heel and immediately walked away, without offering Prince Mutebi a handshake or a word.

Instead, Nyerere went on to greet other people that were standing next to Prince Mutebi. By behaving that way, Nyerere was demonstrating the abhor he had against Prince Mutebi's late father, Mutesa and Buganda Kingdom in general.

By the way, before Prime Minister Milton Obote directed Col. Idi Amin to attack Mutesa's palace at Mengo on May 24, 1966, Nyerere and Obote had prior discussion about it. That is why, Nyerere organised a well equipped Tanzanian standby force near the Uganda-Tanzanian border with orders to reinforce Obote's army in case Mutesa and his subjects launched a stronger counter offensive. The attack led Mutesa into exile in London, where he died in November 1969. 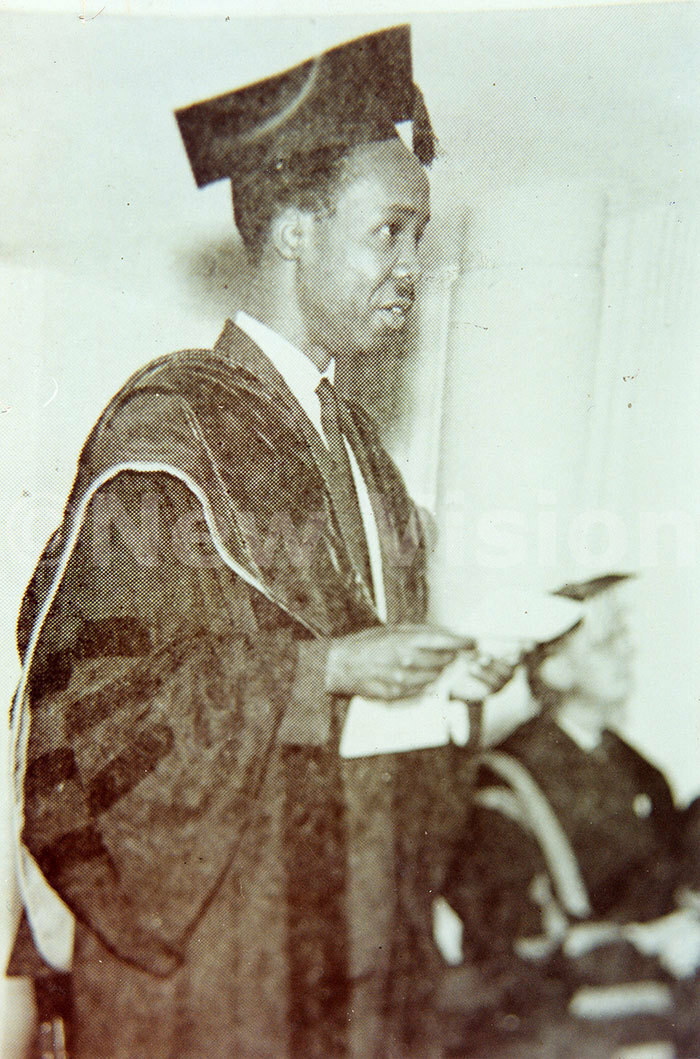 Irrefutably, the cold ties which existed between Mutesa and Nyerere related to the Zanzibar revolution, Nyerere-Obote friendship and the East African federation factor.

On January 12, 1964, when a Ugandan Christian, John Okello commanded about 700 revolutionaries at Unguja, with the support of Nyerere thereby overthrowing the sultan of Zanzibar, Jamshid bin Abdullah Al Said, it left Mutesa distressed. Mutesa's natural support to the sultan was because of the long cordial ties between Buganda kingdom and the sultanate of Zanzibar.

Those ties started with Ssekabaka Suuna II's reign (1824-1856), when the Arabs from the sultanate of Zanzibar and Oman, led by Ahmed bin Ibrahim, visited the Kabaka in 1844, and presented to him a number of gifts like guns, mirrors and spices, which motivated Suuna's wife, Gwokyalya, to remark deafeningly: "These men are handsome and good." Making such a remark when she was the wife of the Kabaka was in total violation of Kiganda customs and hence, Gwokyalya, was supposed to be executed at Bwaise.

However, the infuriated Kabaka Suuna II decided to order her to go with the visiting Arabs on their return to Zanzibar. Given her striking beauty, Gwokyalya was taken over by Sultan Said bin Sultan bin Sultan who at the time was the Sultan of Oman and Zanzibar. Hence, they procreated Said Barghash bin Said Al-Busaid who subsequently became the second sultan of Zanzibar (October 7, 1870 to March 26, 1888). 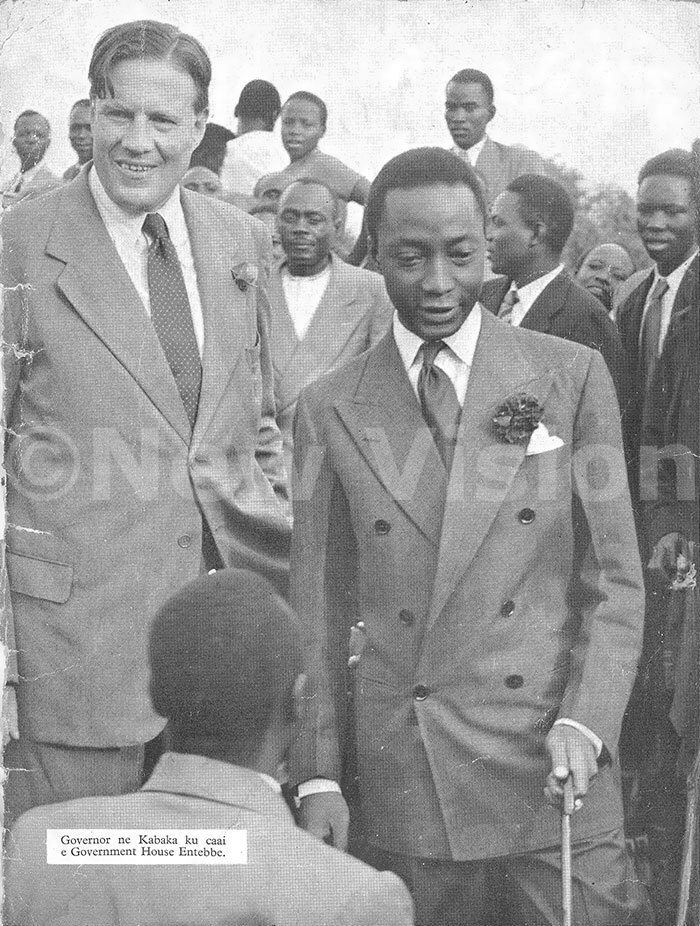 Kabaka Muteesa on the right

Historically, the two sons of Gwokyalya (Barghash and Mutesa I) became ruling kings in two different monarchies; Zanzibar and Buganda Mutesa I reigned from 1856-1884.

At first, he maintained cordial ties with Arabs, but, later, fell out with them over their homosexuality habits. His reservations with Arabs also manifested when Ottoman Egyptians visited him. At the time, Egypt was under the Ottoman Empire following its invasion and the subsequent victory against Mamluk Sultanate in 1517.

Realising the lower levels of civilisation among Arabs compared to Baganda and his suspicions that the Ottoman Empire could extend southwards in order to take over the Source of the Nile, Mutesa I invited Europeans to Buganda under the guise of the need to enlighten his people.

Later, when Mwanga II succeeded his father, Mutesa I, and reigned from 1884-1897, he allowed Arabs back to Buganda. With time, the Arabs and their Muslim converts in Buganda were fought by Capt. Frederick Lugard in conjunction with Christians.

That's why many Baganda Muslims, led by Ssekabaka Kalema and Nuhu Mbogo, sought refuge in Kijjungute near Bunyoro border, thereby being called Abajjungute.

Some of them later relocated to Ankole and their prominent descendants include Nabilah Naggayi (Woman Member of Parliament for Kampala), Haji Habib Kagimu, Hassan Basajjalabala and Dr. Asuman Lukwago.

When Prince Mbogo's nephew, Ssekabaka Kalema died (short-lived Kabaka, 1888-1890), Muslims proclaimed Mbogo as the new Kabaka of Buganda. Thus, they planned to invade Buganda; something Lugard was scared of, to the extent of initiating talks with Mbogo. 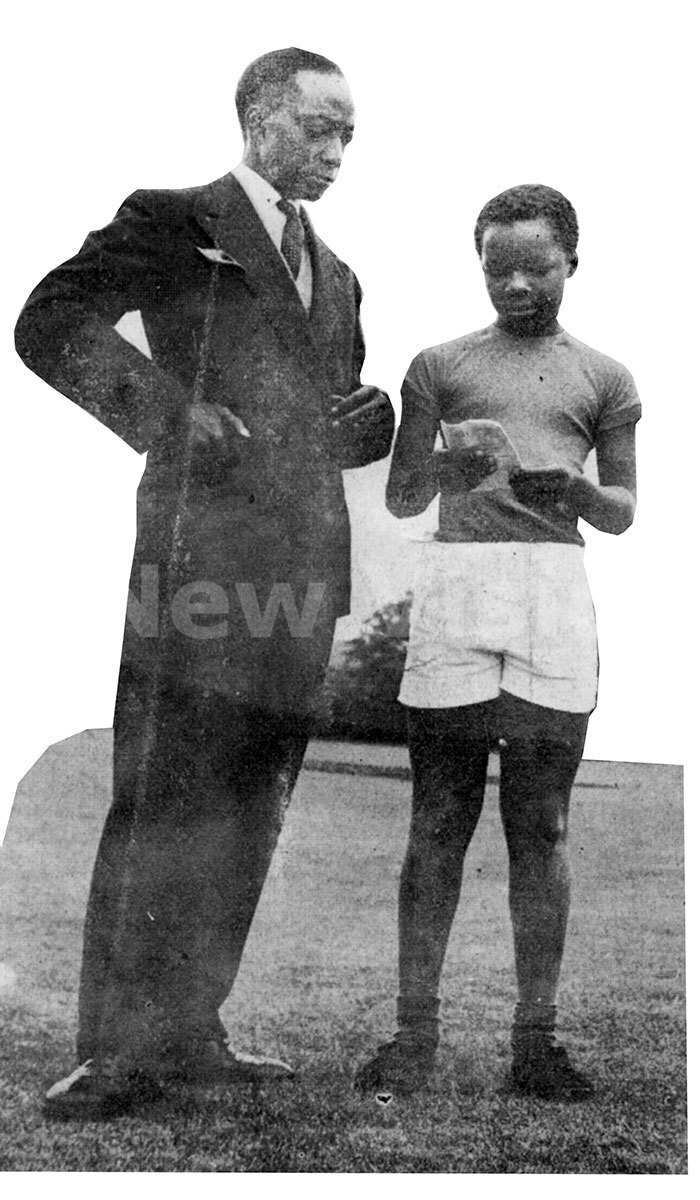 Lugard hoodwinked Mbogo, and his Muslim community back to Kibuga (Kampala), after which Mbogo was arrested and exiled in Zanzibar in 1893. His exile was a blessing in disguise, because it renewed cordial ties between the sultanate of Zanzibar and Buganda Kingdom.

The then reigning sultan of Zanzibar was, Sayyid Hamad bin Thuwaini Al-Busaid. Indeed, the sultan accorded Mbogo fraternal treatment before he returned to Buganda on June 25, 1895.

That sultan was hopeful that Mbogo or his descendants might become the Kabaka of Buganda in future. But, that was thwarted by the Anglican British in the 1900 Buganda Agreement, by sanctioning only the descendants of Ssekabaka Mutesa I as the only royals qualified for Kabakaship.

By the way, Jaberi Bidandi Ssali tried behind the scenes during the making of the 1995 Constitution to convince some top descendants of Mutesa I to accept a reform which would have qualified the descendants of Mbogo, like Prince Kassim Nakibinge and Prince Khalifan Kakungulu for Kabakaship. However, Bidandi's lobbying was unsuccessful.

Since Mbogo's exile in Zanzibar renewed the bond between Buganda Kingdom and Zanzibar, Ssekabaka Mutesa II sympathised with the sultanate of Zanzibar when Okello, supported by Nyerere, overthrew it in 1964. Thereafter, Nyerere travelled to Zanzibar and convinced the leader of the Afro-Shirazi, Abeid Karume, to accept a union between Zanzibar and mainland Tanganyika. The push for the East African federation was the other factor which could not allow Mutesa and Nyerere to be friends. Mutesa had reservations about it. That is why the British governor, Andrew Cohen, exiled him to London on November 30, 1953. As an ardent supporter of the federation, Nyerere wanted to market the same idea to Buganda and Uganda.

No wonder, after he attended the June 1960 conference of African States in Addis Ababa, Ethiopia, Nyerere announced that he would visit Kenya and Uganda to convince them on the need for the East African federation. When he said so, Jolly Joe Kiwanuka castigated Nyerere and his East African federation idea. Though Nyerere went to Kenya and marketed the idea, he did not proceed to Uganda since his doctor advised him to rest due to malaria.

Irrefutably, Nyerere perceived Mutesa, his ministers and Buganda Lukiiko as an obstacle to the East African's federation, especially when Mutesa spearheaded the breakaway (secession) of Buganda from the rest of Uganda on January 1961. 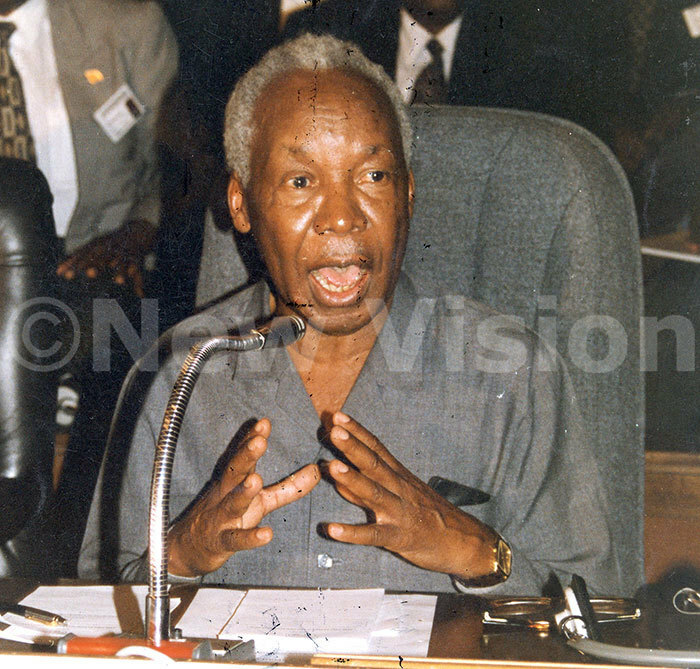 In a bid to achieve that, the Buganda Lukiiko selected four persons to draft a detailed plan for Buganda's secession. They included Amos Sempa, Fred Mpanga, Godfrey Binaisa and Dr. Luyimbazi Zake. The aforesaid also went to European and American countries to benchmark the backgrounds to their independences.

Mutesa also sent a 36-page memorandum to Queen Elizabeth II, underscoring Buganda kingdom's secession demand. That memorandum was also sold to members of the public at sh3. In a determined effort, Mutesa, in February 1961, sent Michael Katikkiro Kintu, A.D Lubowa, E. Lumu and Ssempa, to Sudan and Ethiopia, to rally support for Buganda's secession among the 35 foreign missions resident in Sudan. Mutesa also sent Lubowa and C.M Mukasa, to Britain, and Fr. Spartas Sebanja, to Greece for the same cause.

Besides Nyerere, Kirunda Kivejinja, currently the Minister of East African Community Affairs, strongly scolded proponents of secession, like Buganda Katikkiro, Kintu. At the time, Kivejinja was a student at Delhi University, India. Kivejinja said: "It is too late to revert to the 17th century, when the Baganda and their possessions were personal of the Kabaka. While the Baganda want to keep their traditions, they must at the same time remember that it is impossible to intercept the march of history."

Later in November 1960, when Nyerere heard that some Bahaya in Bukoba, Tanzania were suggesting a union with Buganda in case it (Buganda) seceded, Nyerere acted first by influencing Buhaya local council to come up with a resolution denying so. In addition, Nyerere made sure that a delegation from Tanganyika visited Uganda and categorically denied such claims. That delegation was led by Edward Barongo, a member of the Tanganyika Legislative Council, who doubled as the commissioner of West Lake province. 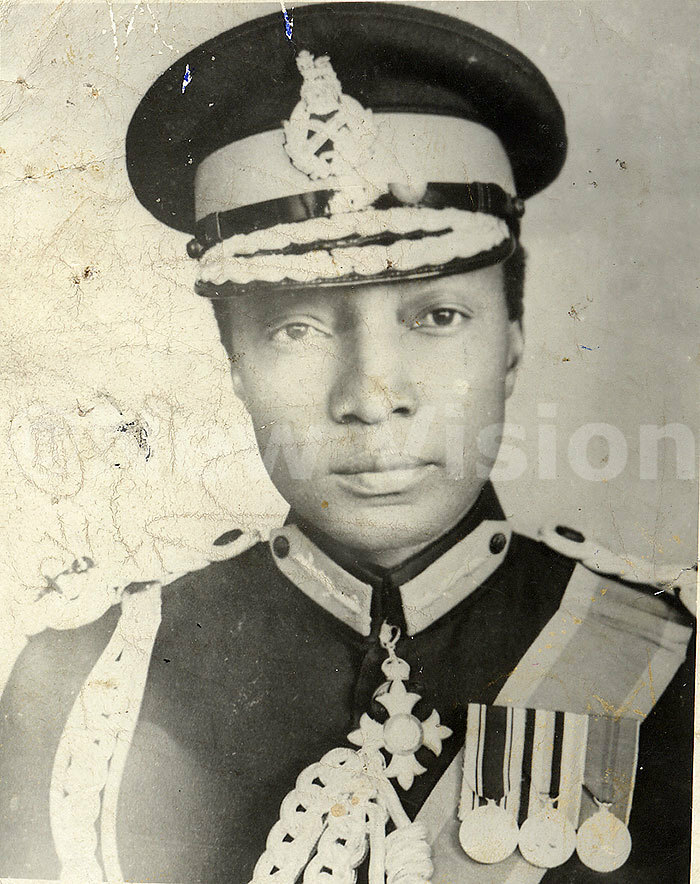 Later, in 1962, Barongo became the national deputy secretary general of TANU. Six years after, Nyerere made sure that there was a stand by a heavily armed force in Bukoba, at the time Obote directed his forces to attack Mutesa's palace at Mengo in 1966.

Thereafter, on December 1, 1967, Presidents Obote, Nyerere and Jomo Kenyatta (Kenya), formalised the protocols on East African federation. The aforementioned had earlier on, on June 5, 1963 attended a summit in Nairobi, Kenya, during which they pledged to ensure that the three countries federated.

In reaction, State House officials started making arrangements for President Yoweri Museveni's trip to commiserate with the widow, Maria and Tanzanian people in general. Former justice minister Abu Mayanja was among those that were nominated to accompany Museveni to the funeral.

Before Museveni and his delegation left for Tanzania, there was a memorial mass at Rubaga Cathedral, during which Abu Mayanja noted that it was partly Nyerere's rigidity on Idi Amin that caused the collapse of East African community. Mayanja's remarks were noted by spies present in the Cathedral.

Indeed, when those spies briefed someone top in government, who habitually talks affectionately about Nyerere; Mayanja was dropped from the Uganda government delegation which Museveni attended Nyerere's burial in Tanzania, which was preceded with a requiem mass at Butiama Catholic church, led by the Archbishop of Mwanza Catholic Diocese, Anthony Peter Mayalla.

On the other hand, Zambian president Frederick Chiluba, blocked Obote from attending Nyerere's burial. Chiluba did so in a bid not to strain relations between Zambia and the ruling government in Uganda.

Cops back in hunt