KCCA held at home by URA

The champions came into today’s game on a run of five league wins, the last one being against bitter rivals Vipers SC at home on Saturday.

The champions came into today’s game on a run of five league wins, the last one being against bitter rivals Vipers SC at home on Saturday.

StarTimes Uganda Premier League
Result
KCCA 1 URA 1
KCCA has missed out on the chance to close the gap on table leaders Vipers SC after they were held to 1-1 draw at home by visiting URA FC.
The champions came into today's game on a run of five league wins, the last one being against bitter rivals Vipers SC at home on Saturday.
The tax collectors as they are famously known, URA put up a spirited fight to return home with a point.
URA led the home team as early as the ninth minute after overlapping right-back Ashraf Mandela beat goalkeeper Charles Lukwago who was returning to the posts having missed the last three league engagements due to national team duties.
The visitors calmly took the game to the home team and managed to hold the lead for the entire first half.
KCCA returned with a different approach in the second half after the introduction of Uganda U20 midfielder Steven Sserwadda who replaced Nigerian striker John Odumegwu in the 53rd minute. 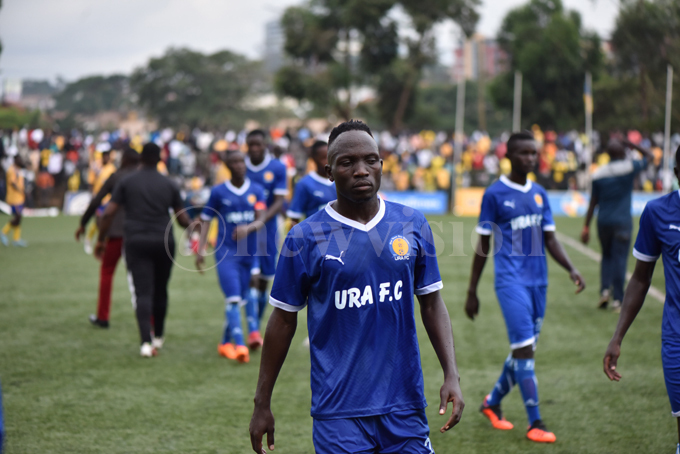 URA players walking off the pitch after the game. PHOTO: Richard Sanya

The younger midfielder's impact became felt when he set up Allan Okello in the 57th minute to score an equalizer that brought the champions back into the game.
Okello who was also making a return to the team has been away with the national team just like Lukwago.
After Okello's goal, the battle in the midfield became intense and fact that neither side wanted to concede, the game ended in a draw, hence sharing the spoils.
Surprisingly, KCCA FC head coach Mike Mutebi was excited by the performance of his charges despite dropping two points which halted their plans to catch up on the leaders Vipers SC.
"A point is okay with me, the fact that we were a goal down and URA were well organized today," Mutebi stated.
On the other hand, URA FC Coach Sam Ssimbwa was impressed with the officiation saying that in previous games, his team has always played well but officials have been biased against his side.
"I am happy for the point, KCCA is a big opponent. Surely, managing to pick a point against them at Lugogo is good for me and the boys did well," Ssimbwa stated.
KCCA moved fourth on the log with 23 points with three games in hand while URA is tenth with 16 points

KCCA tasked to intensify sensitization and inspection of slum areas

KCCA tasked to intensify sensitization and inspection of slum areas