MENU
The life and times of Med Kaggwa
Previous Story

My last day with Med Kaggwa

An excited Kaggwa sat at the visitor’s chair talking to the new boss, little did he know that he had handed over his office forever.

Mastula Nassaka being welcomed by the Uganda Human Rights Commission chairpreson Medi Kaggwa (right) in a mock exercise taking over the office as a head after being given opportunity to take decisions in running the office in commemoration of Childrens Day at the agencies headquarters in Kampala on Tuesday Nov 19, 2019. Photo by Francis Emorut

An excited Kaggwa sat at the visitor’s chair talking to the new boss, little did he know that he had handed over his office forever.

I was assigned to cover an assignment where the Uganda Human Rights Commission (UHRC), Boss Med Kaggwa, was going to hand over his office to a teenager in preparation for the commemoration of World Children's day slated for Wednesday.

I reached the Human rights offices at Twed Plaza located on Lumumba Avenue in Kampala, after security checks and exchanging pleasantries to receptionists, I was ushered to the fourth floor where he sits. In his office, I was received by two young ladies, His office is donned with a number of black sofa chairs for visitors and a number of files.

Immediately I entered his office, I saw a picture of President Museveni hanging on the wall and a calendar. Donning on a grey coat, a pair of black trousers, and a tie. It was my first time to meet him the Politician who turned a human rights defender. He welcomed me with a smile and turned to the 19year old Mastulla Nassaka who had taken over his office.

An excited Kaggwa sat at the visitor's chair talking to the new boss, little did he know that he had handed over his office forever. As fate would have it, he died less than 24hours later on his way to the World Children's day celebrations. 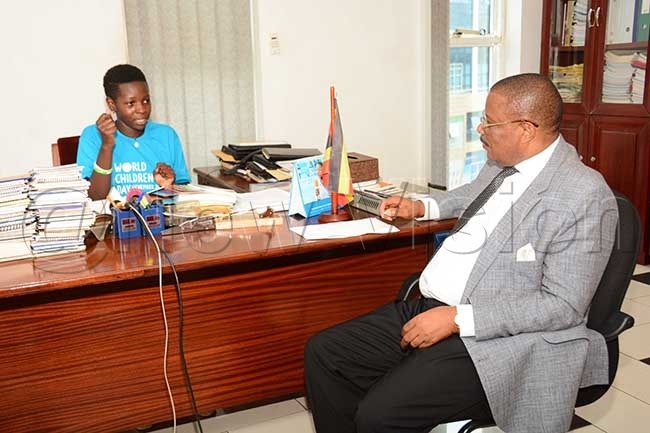 Mastula Nassaka occupies the seat of the Uganda Human Rights Commission Medi Kaggwa (right) in a mock exercise. She took over the office as a head after being given an opportunity to make decisions in running the office in commemoration of Children's Day at the agency's headquarters in Kampala on Tuesday, Nov 19, 2019. Photo by Francis Emorut

In his office, he told me about the plans for the celebrations. He was in high spirits as he was rushing for a meeting. He even limited the journalist's questions because he had a meeting to attend in the next few minutes.

After a little chat, I requested for an interview for his plans after retirement. The 60- year -old, laughed it off and asked me why I thought he was about to retire. At this moment we were talking about the natural retirement little did we know that God had a different plan for his retirement into eternity.

The friendly, cheering Kaggwa gave me his card and we bid farewell to each other. I used the lift and he used the stairs, instead of pressing level one to get out, I pressed ground level, so we met again at the ground level where he had parked, and we still said bye to each other.

"Let's meet next week on Monday," he reminded me.

I received the news of his demise at the World Children's day celebration when one of my neighbours who happened to be a UHRC staff member started crying and sighing while looking at her phone.

Sadly, we shall never meet for our appointment. Goodbye, my new found friend.