Cabinet has distanced the government from allegations made by the Speaker of Parliament, Rebecca Kadaga, that sh24b meant for the construction of a bridge over Isimba Dam connecting the districts of Kayunga and Kamuli was "eaten" by a group of top officials.

"We are not aware of the sh24b meant for the Isimba Bridge that was allegedly eaten," Irene Muloni, the energy minister told journalists on Tuesday at the Uganda Media Centre.

"The Construction works for the Isimba Public Bridge and access roads are progressing well and anybody who wishes to see the ongoing works is welcome to visit the Project site for a guided tour," she added.

Muloni's clarification comes against the backdrop of recent revelations by the Kadaga (Woman MP for Kamuli) that sh24b meant for a bridge connecting Kayunga and Kamuli districts across river Nile had been "chewed."

The money in question, MPs said, was part of the $589m Isimba Hydropower Dam (183MW) which was commissioned seven months ago.

Under component two of the Isimba Hydropower Dam project, the contractors were meant to tarmac a stretch of about 16kms with an adjoining bridge connecting Kamuli and Kayunga districts to ease mobility, trade and development between the two districts.

"I have been following this matter for some time. This money was chewed, sh24b. I have already informed the President and even told him the eaters," Kadaga said.

Kadaga noted that she passed on the information about the swindling of the funds by some technocrats in the ministry of energy to President Yoweri Museveni in March. 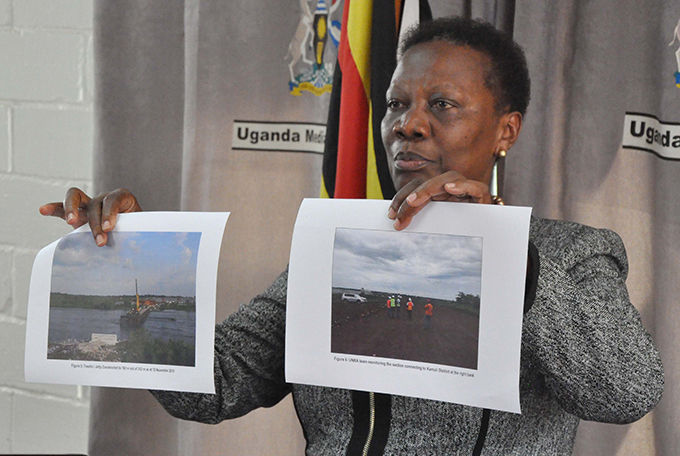 Muloni showing some of the ongoing construction of the Kayunga-Kamuli Bridge. Photo by Ramadhan

"But I have waited for action up to now," she added.

On Monday, Cabinet chaired by President Yoweri Museveni, discussed the matter, noting that the Isimba hydropower plant and transmission line components of the project were completed and commissioned by the President in March this year.

Yesterday, Muloni said, works on the separate bridge is now at 20%. The bridge construction is supervised by the Uganda National Roads Authority (UNRA).

UNRA's director of bridges, Eng. Lawrence Pario, who supervises the construction, said yesterday that the Isimba Public Bridge connecting Kayunga and Kamuli Districts is located 500 metres downstream of the Isimba Dam and it consists of two sections joined at Koova Island.

Meanwhile, Cabinet also approved the transfer of the Northern Uganda Youth Development Centre (NUYDC) from the Office of the Prime Minister to the Ministry of Education and Sports.

Progress of the bridge

Does God want us to be rich?

'I want my wife back' Sam Niiwo