Russian professor attempts suicide after b...
Next Story

A renewed push to regulate transportation of children

"We should be able to get some resources to go into the process of coming up with this regulation," says Mondo Kyateeka from the gender ministry.

Mondo Kyateeka, the commissioner of youth and children affairs in the gender ministry, speaking during the inter-ministerial dialogue on the regulation on transportation of children. (Credit: Joseph Kizza)

"We should be able to get some resources to go into the process of coming up with this regulation," says Mondo Kyateeka from the gender ministry.


KAMPALA - Various stakeholders have re-energised their commitment to ensuring that a national regulation on the transportation of children is formulated, on the eve of the 30th anniversary of the UN Convention on the Rights of the Child, to which Uganda is a signatory.

"We are behind schedule," underlined Mondo Kyateeka, the commissioner of youth and children affairs in the ministry of gender, labour and social development.

"Feel free to invite and work with us," he told officials during an inter-ministerial discussion in Kampala on how the transportation of children can be regulated.

"We should be able to get some resources to go into the process of coming up with this regulation. We are all at your [beck and] call," added Kyateeka, who represented the ministry's permanent secretary, James Ebitu.

It was a follow-up meeting from an earlier one held in March this year, which had looked at sounding out a call for a review of transport regulations, particularly to include a clause on anti-trafficking. 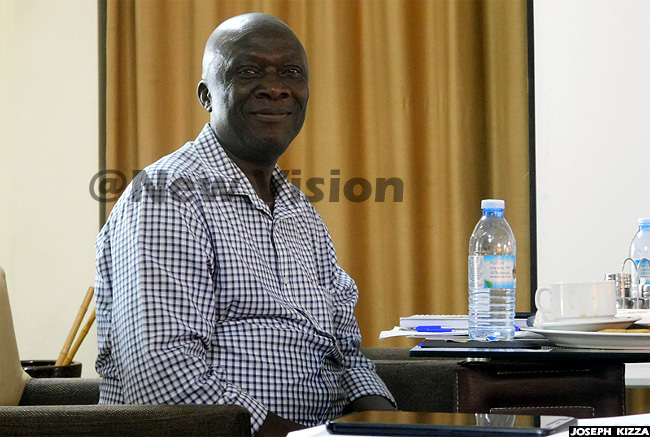 Commissioner Moses Binoga from the anti-trafficking office attended the dialogue

The second meeting agreed that the works and transport ministry would take the lead in drafting the regulation.

And the justification is clear.

"The transport industry plays a key role in connecting all the districts,  but it also plays a role in connecting crimes," said Damon Wamara, the country director of Dwelling Places, an organisation that supports street-connected children  through rescue, rehabilitation, reconciliation, resettlement as well as empowering their families.

He said the organisation he works for has engaged boda boda riders and taxi stage managers in Karamoja sub-region, an origin of unsafe child migration, to ensure that unaccompanied children do not board.

It is understood that as many as 200 children were intercepted on the borders of Kampala and Napak districts this year.

From findings, the sticking issue here is the law.

"Different stakeholders are interested in the issue [regulation], but they kept on  identifying gaps in the laws and regulation," said Wamara. "If we close these gaps, we are protecting not only the Karimojong children or children in the villages, but also our own children." 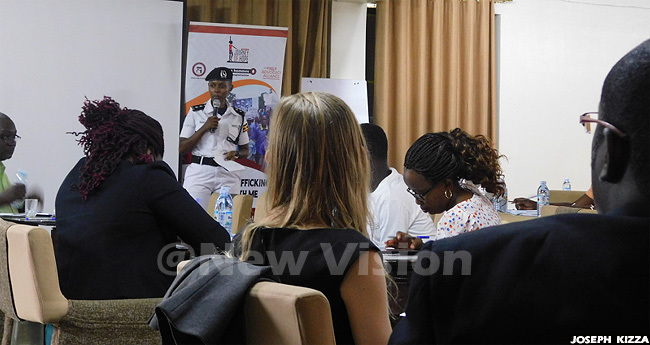 While the current state of transportation of children is "saddening", the situation can be "reversed if we all work together in implementing the existing policies", according to Police legal officer Pamela Kentaro.

Representing traffic and road safety director Dr. Steven Kasiima, Kentaro said the laws are there but that the Police face "some form of resistance from forces from different directions" when they try to enforce the existing policies.

"We need to engage the parents to also participate in ensuring that their children move to and arrive at school safely.

"As Uganda Police, we have a number of road check points. We can partner with other stakeholders to ensure that we do routine checks," she told the meeting.

Boda bodas are supposed to carry one passenger. There is an exception though. Two children of between the age of five and 12 can be taken to be equivalent to one passenger. 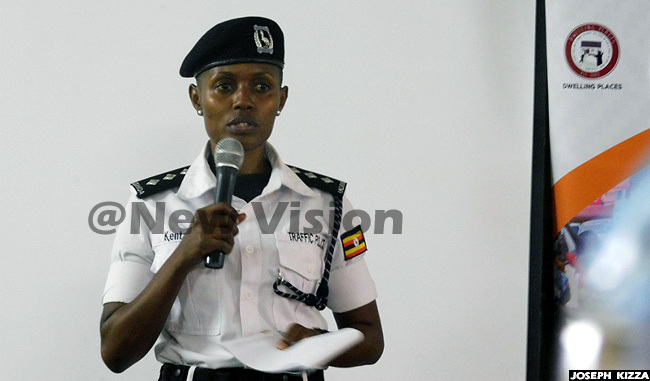 Meanwhile, Immaculate Natukunda, the secretary to the Transport Licensing Board (TLB), said it is important to pay "critical attention to the way children are handled, especially on the roads".

"This issue is multisectoral - it has gender issues, security issues and transport issues.  The issue of wearing helmets has been overlooked yet there are even helmets for children," she said.

"Whereas there are provisions in our Act [Traffic and Road Safety Act, 1998] that provide for the transportation of children,  they are not enough. So we need to come up with extra provisions."

The Board has come up with proposals which, if enforced, are hoped will help safeguard children from any form of violence while being transported from point A to point B.

Identification and clearance are important.

"The road chart provides for all children under the age of 18 to be accompanied by an adult," she said.

"In cases where they are not accompanied by an adult, they should possess a clearance letter or a letter of authorisation from a clearance authority, for example a school or local council," added Natukunda.

The board is also proposing that all operators prepare passenger manifests, which carry such information as the name of the bus company, motor vehicle registration  number, the number of the passengers, the name/identification details of the person who has authorised the minor's travel, the departure town and  destination, the names of the driver and the conductor.

"We shall propose that a copy of the manifest be kept at the terminal.

"We shall also propose punitive actions for those found violating the conditions of the license, which includes either revocation or suspension of that license. Immaculate Natukunda, the secretary to the Transport Licensing Board, made a delivery on the status of transportation of children

During the discussion, one ubiquitous concern was on trucks being used to transport people, including children, as passengers.

Wamara revealed they were informed by their counterparts in neighbouring Kenya that every day, as many 10 children are being trafficked into the capital Nairobi using trucks.

"The Transport Licensing Board only issues an owner's transport vehicle (OTV) license to companies that wish to transport their workers - up to a maximum of 25,  depending on the tonnage of the vehicle - from one place of work to another," she said.

Principally, a driver of a vehicle, such as a lorry or pick-up, that is designed to carry goods must get a special permit in order to carry passengers. This is the OTV license.

To acquire one, the owner of the vehicle and company is supposed to make a formal application to the Transport Licensing Board, stipulating  the nature of the work and justifying the need to carry employees using  the said vehicle. On consideration of the application, the secretary to the board writes a letter to the licensing officer at the Uganda Revenue Authority, recommending issuance of  the permit. 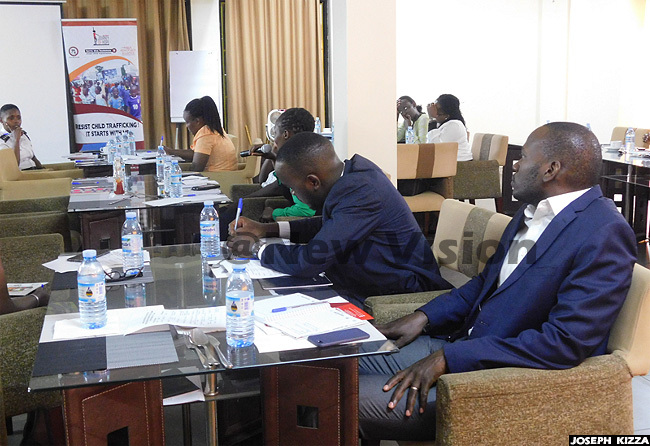 The Traffic and Road Safety Act, 1998 is currently being reviewed by Parliament's infrastructure committee.

An official from the works ministry urged civil society actors to intervene by pushing for the amendment of clauses (a) and (b) of Section 107(4), which provide for the transportation of children.

The two clauses state that:

The official wants this piece of legislation to provide that every single child occupies a seat as one passenger.

The argument is that the current state of this part of the law is the major cause of overloading of children in commuter taxis, school vans and shuttles.

"Let one child be one child for purposes of transportation." 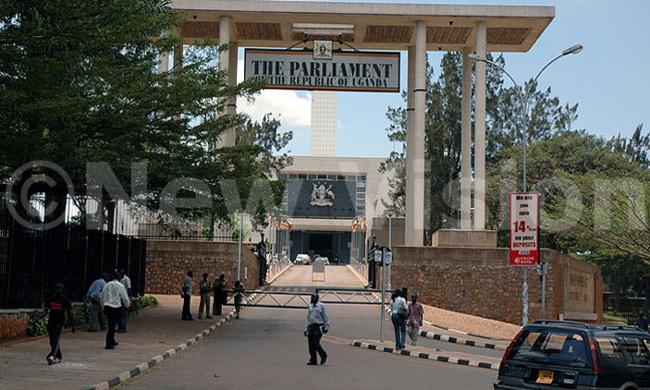 By the way, since the act is under review, stakeholders are free to seek an  appointment with the infrastructure committee to give their views - and in this context, on issues to do with transportation of children.

On his part, Wamara said internal trafficking continues to pose as one of the biggest risks in  Uganda.

"We have seen an increased number of children who are brought  from the rural areas to work in the urban areas - for forced  begging, selling of eggs or bananas and for work as housemaids. Children with disabilities are also brought in to beg.

"Although this trend continues to happen, the local government in Karamoja has had its own initiatives at the grassroots level to intercept and ensure that fewer children leave the sub-county and are able to be protected from being violated.

"This year alone, we have seen and had communication from the district of  Napak that close to 200 children have been intercepted, saved and rescued  from further exploitation. We congratulate the local government on such initiatives that protect children.

"We have received various information and news of children ranging from the age of 10 until 18 who continue to be trafficked into Kenya for forced labour and housemaid work.  We have also received information that at least 10 children arrive in  the city of Nairobi every day.

"It is the duty of government to protect children and ensure that they are protected from any form of violation that includes them being taken out of the country and being exploited in another country," said the Dwelling Places country director. 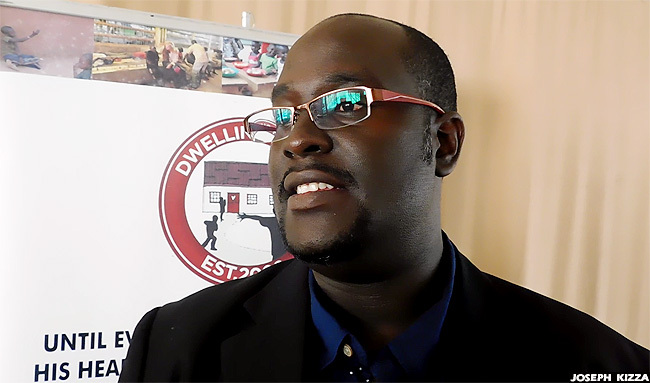 What should be done

According to Wamara, Government needs to continue strengthening its border patrols and  intelligence to ensure that children are not taken across the borders.

"We have heard information from our colleagues in Nairobi that the children come from Karamoja, they stay either in Tororo or in Busia, before being moved into Kenya and  then finally on trucks into Nairobi," he said.

Furthermore, he suggested that all transport companies should have child protection policies to ensure that children are protected in their companies.

Child protection policies, Wamara said, will also ensure that unaccompanied children are attended  to, they are identified and are given the necessary support to ensure they do not end up being exploited".

"As Dwelling Places, we are willing to give the necessary support to companies that want to offer child proctection of their children," he said. 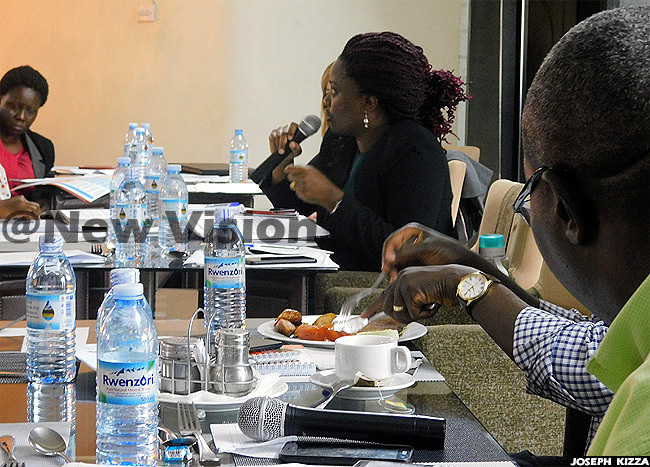 Monday's was the second such meeting in a space of eight months. The first edition was held on March 7.

Commissioner Moses Binoga from the counter-trafficking office talked of the need for serious punitive action against non-compliance when developing regulations and also called for training of law enforcers.

"The idea of sensitization is good. We also need to train the people who are going to enforce this - the Police, the LCs, etc," he said.

Binoga said there is a National Taskforce Committee for Prevention of Human Trafficking, composed of members of key stakeholder bodies such as ministries,  departments and CSOs, including Dwelling Places.

"We can invite you to interact with the committee and during that interaction, you can decide whether to have permananent representation on the committee or you can  be called upon as and when necessary," he told the dialogue. 
Rights of the Child anniversary: 'A good reminder for us'

Nowadays, children do not necessarily walk from Karamoja, Masaka, Rakai  and even West Nile to get to Kampala. In Uganda, children exploitation and abuse is still in existence and our commitment should be strong and it should be valid that we should protect children from all forms of abuse. Children should have a right to education, participation, life, feeding and all other fundamental rights that a child is to have. The 30th anniversary of the UN Convention on the Rights of the Child will be a good reminder for us as a country to look at the  Sustainable Development Goals (SDGs) that we also committed to and see what role we have played in each of those goals in ensuring that child  participation and child protection has been enshrined in those SDGs.