Museveni thanked the Scouting Movement for supporting government programs like food production, health, hygiene, literacy, which he said have directly contributed to the living conditions of people

Museveni thanked the Scouting Movement for supporting government programs like food production, health, hygiene, literacy, which he said have directly contributed to the living conditions of people

President Yoweri Museveni has applauded the Scouting Movement in Uganda for its efforts to prioritise environmental campaigns as a tool to conserve and save the environment for development.

He said the environment has been central to the scout movement, which he said plays an important role in connecting people with the natural world, adding that the 50million scouts in the entire World was a movement and force that can stir global momentum for creation of a sustainable future.

The president, who is the patron of the Uganda Scouts Association (USA) pledged his ‘total commitment and that of his government to ensure that scouts movement continues to thrive, blossom and nurture our young people'.

This was contained in the President's speech read for him by the Vice President, Edward Kiwanuka Ssekandi at the flagging off of the National Organizing Committee for the 8th Africa Scout Jamboree at the President's Office in Kampala recently.

The Jamboree is scheduled to take place at Kaazi Camping Grounds on the shores of Lake Victoria between 3rd and 12th August 2020, with attendance of 88 African countries and visitors from the United States of America, Canada Korea, and other countries.

He applauded the World Organization of Scouts Movement that has kept the dream of Baden Powell alive, adding that it was the biggest youth movement in the world, ‘producing enlightened, tolerant and disciplined leaders'.

He stated that the Uganda Scouts Association with five million members was one of the largest youth movement in Uganda, who support the development of young people and the movement.

"The skills and values acquired by members of the Scouts Movement have made it one of the most development-oriented organization not only in Uganda but also in the world," he said. 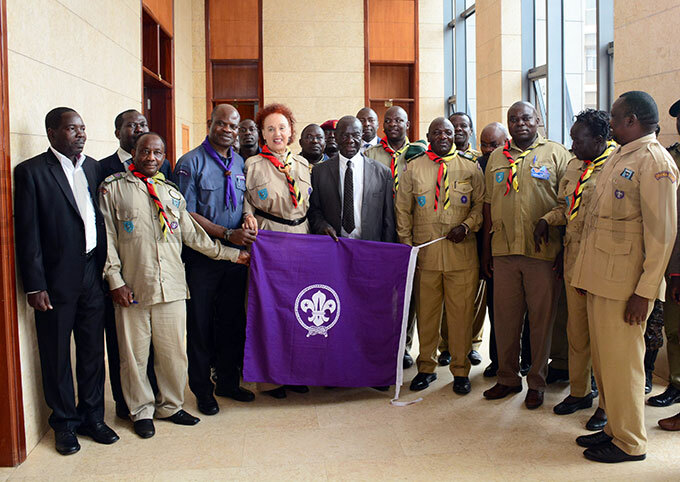 Museveni thanked the Scouting Movement for supporting government programs like food production, health, hygiene, literacy, which he said have directly contributed to the living conditions of people.

The organizing committee later held a meeting, which was attended by state minister for works, Gen. Katumba Wamala who doubles as the Chief Commissioner of the association and Maggie Kigozi, the chief scout, Makindye East legislator, Ibrahim Kasozi, among others.

Kigozi said that the meeting had rejected a request by the Buganda kingdom administration to share the 120 acres that were donated by former King of Buganda, Daudi Chwa in 1932.

"The use for the donation of the land was clearly meant for scouting, unfortunately, the land is very attractive and developers are interested because when they see forests and bushes they think it is useless, but scouts like forests," she said, adding that the land was the only place where natural forests are preserved within the periphery of Kampala city.

"It is the only place where you find wetlands still protected. It has birds, trees and everything and therefore attractive," she said, adding that Buganda government had approached them asking to share and develop some portion of the land.

"We have a lease title running up to 2097, we hope it will be renewed then, it is for the use of Uganda, and Ugandans come here for some reasons. So we want to keep it even longer. We have therefore disagreed with Mengo," she said.

The Buganda Land Board spokesman, Denis Lugya, however, said that the Scouting Movement had misunderstood the sharing matter on table. He said the Girl Guides portion on the land had a lease of 49 years, which he said expired before it was renewed and part of the land was sold away by some members for development.

"We informed them that giving away the land for development was violation of the agreement with Buganda government, which was for camping," he said, adding that the administration agreed to renew the lease on ‘mutual agreement' the association forfeits the land with developments and maintains the core camping ground and be compensated for extra land elsewhere

Mowzey Radio funeral: After church, all roads lead to Kololo