The Entebbe Club golfer travelled to Nigeria with four other Ugandans.

The Entebbe Club golfer travelled to Nigeria with four other Ugandans.

Uganda's Irene Nakalembe is aiming for a double after winning the Nigeria Ladies Open at the IBB International Golf and Country Club in Abuja on Friday.

Nakalembe returned 236 gross over 54 holes to beat over 60 golfers including defending champion Eva Magala to the 22nd edition of the annual championship title. 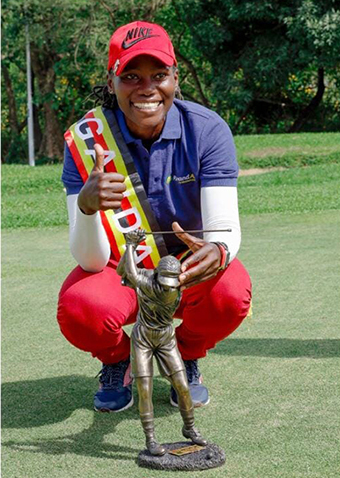 Her focus is now on the Ikoy Ladies Open in Lagos, for which she is defending champion. Last year she won the championship, with Magala taking the Nigeria Ladies Open.

The national team player, who was sponsored by RwandAir to this year's championship, beat Nigeria's Rachael Danjuma who finished second by 12 strokes while Amina Wilfred was 16 strokes off, in third.

The Entebbe Club golfer travelled to Nigeria with other Ugandans that also included Anne Abeja, Safari Zawadi, Carol Kamusiime and Wendy Angudeyo, who also competed in the championship.

"It feels great to win this championship. I didn't expect it but I knew I had a good chance. I had a good start and just maintained it," Nakalembe who started with four-over 76 before a uniform eight-over 80 in each of the last two rounds, stated.

"I expect to give the Ikoy championship another shot as defending champion,"

Last year, in the 44th edition of the championship, Nakalembe's won the event with an aggregate score of 243 over 54-holes, beating Eva Magala by a stroke to wrap up a fantastic outing for the two top female golfers.

Magala won last year's championship with 251 gross over 54 holes in the tournament that attracted 116 players.

High maternal mortality: Where is the problem?