Eat right to keep gestational diabetes at bay
Next Story

People living with diabetes have been warned against abandoning their medication for prayers and herbs in search of quick healing.

While addressing people at a camp organised to create awareness on self-care amongst people living with diabetes, Dr. William Lumu, the president of Uganda Diabetes Association (UDA) revealed that they have received reports of people resorting to prayers and herbal remedies upon being diagnosed with the disease.

"The disease is physical, not spiritual. If the doctor tells you that the disease has progressed and your leg needs to be cut off, even if you go for prayers, the leg will still be cut off," he said.

He noted that though he does not discourage people from praying, they should take their medication as prescribed by medics alongside it.

He said they will use the traditional and complementary medicines law to arrest whoever is found advertising that they have a cure for diseases.

He asked them to instead take their medicines to their laboratory in Wandegeya to have them tested and approved by the Ministry of Health.

Mutungi said that when the medicines are found to be genuine, they will be registered and the right dosage will be determined to avoid side effects in the users.

The event which was organised to mark the World Diabetes Day, included activities such as free testing of blood pressure, blood sugar and HIV/AIDS, educational information and exhibition on nutrition and footwear for people with diabetes.

The event took place at Nsambya sharing hall. The main commemoration will take place on Thursday at Kiwoko hospital in Nakaseke district under the theme "family and diabetes".

Diabetes also known as a lifestyle disease is a disease in which a person's blood glucose, or blood sugar, levels are too high due to an inability to produce sufficient quantities of insulin.

He noted that in the next five years, the numbers are expected to grow to 600m whereby the majority (80%) will be in developing countries.

In his remarks, Dr. Mutungi noted the numbers of those with the disease in Uganda could be higher because most people do not know that they have the disease.
He also noted that most amputations in Uganda are due to the disease.

"About 300,000 people do not know that they are living with diabetes.  The disease has bad complications. So we need to prevent it," he said. 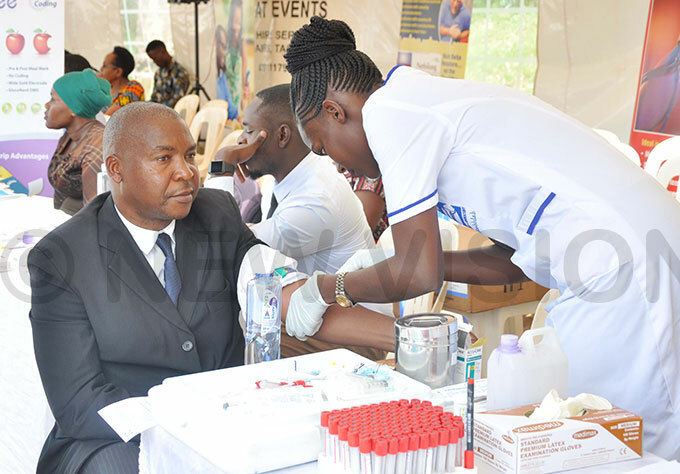 He noted that this year's celebrations will focus on family because they are the most affected by the disease.

He called on families to be involved in the fight against the disease noting they should play a crucial role in promoting healthy habits and also supporting those suffering from the disease.

He noted that for type 2 diabetes, which affects adults due to their lifestyles, families need to increase the intake of fruits and vegetables, reduce inactivity by engaging in 30 minutes rigorous exercises every day.

"Eating foods high in fats, sugar and cholesterol, obesity, drug and alcohol abuse, and physical inactivity are some of the factors that predispose one to diabetes.

To prevent this, Mutungi advised Ugandans to always walk or run together with their families to ensure that the whole family is healthy.

He advised Ugandans to always go for checkups and take responsibility of their health by adopting healthy lifestyles.

Dr. Lumu noted that families need to offer support to those with the disease, arguing that it is expensive to manage it on an individual basis.

"When one is diagnosed with diabetes, part of the income goes into care. Drugs are expensive, tests are expensive and when there is a complication, more problems arise," he noted.

Dr. Frank Mugabe, the Principal Medical Officer at the department of Non-communicable diseases at the Ministry of health, advised Ugandans to desist from associating obesity with wealth.

He said this culture of glorifying fatness has led many Ugandans to inherit the lifestyle diseases.

He stated that wealthy parents need to stop pampering their children with fast foods and instead reinforce good nutritional habits and physical exercise.