The government of Japan has pledged to inject more funding in research on rice to boost its production in Uganda.

Takayuki Uchiyama, the senior representative for Japan International Cooperation Agency says that they are ready to give the necessary support to Uganda to improve rice production.

He made the remarks at a ceremony in which two Ugandans were recognised for their contribution towards development in the country.

Every year, JICA President awards individuals and organisations with preeminent achievements of the socio-economic development in developing countries through JICA's international cooperation activities.

The duo was among the over 58 individuals and organisation across the globe who was recognised for their contribution in the development of their countries.

JICA has been supporting research and the rice sub-sector in the country since 2004.

In 2010, it constructed a training facility at National Crops Resources Research Institute in Namulonge which acts as the centre of national rice research and dissemination.

Uchiyama explained that Asea was selected because he has supposed a number of JICA projects for the past 20 years.

"Asea has greatly contributed in the rice sub-sector not only in Uganda but Africa at large.  Rice now is recognised by the ministry of agriculture as food due to his efforts," he said

Adding, "Asea has facilitated research activities in rice sub sector which show the establishment of region rice research center at Namulonge and we are grateful of him.

Muwanga who is the principal of Nakawa vocational Institute was recognised for supporting JICA metallic seats project and also transforming it into a reference to others.

"With your intervention, rice production at Kanungu has drastically increased because of the specific research and support you have accorded to NARO. We are gratified with your contribution and Uganda will soon attain rice sufficiency," said Kashaija.

"It is not that we do not want to import rice from japan but we are just happy that we have been taught how to grow rice efficiently," Kashaija noted.

Rice is a cereal and it is grown mostly in wetlands.  Its production in Uganda began in 1942 for the World War two soldiers. It is farmed in Uganda by farmers country wide most especially in Eastern Uganda due to its lowland nature and wetlands and the estimated production is 165,000 metric tons. 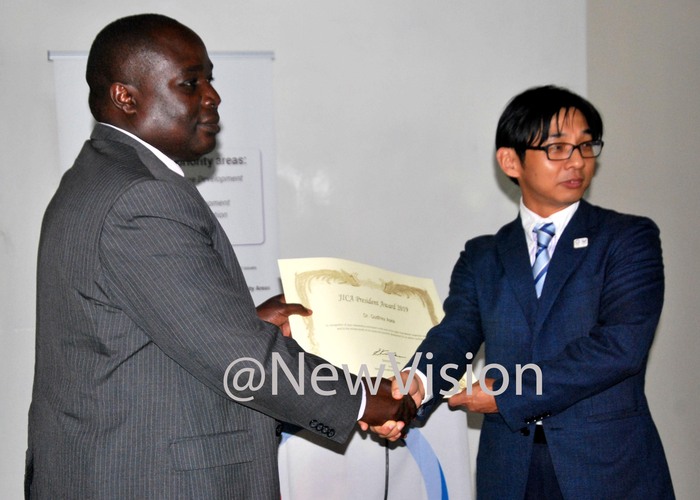 According to Kashaija there is inadequate knowledge about on rice farming in Uganda and many farmers just venture into the rice business without make consultation on it.

Kashaija described Asea as a man of centre of attraction in NARO, noting that he has delivered knowledge to a number of people.

Beatrice Byarugaba, the director for agricultural extension services commanded JICA for its continued support to Uganda particularly in the agricultural sector.

Uchiyama revealed that JICA's main objective in vocational studies is to support improvement of quality of vocational training in order to meet the demand of human resources in the industry.

"Since 1968, JICA has supported Uganda's technical and Vocational education and training (TVET) management system including building the capacity of instructors," Uchiyama noted.