Kayiira gets presidential visit upon modif...
Next Story

How nursery schools are cheating parents

The tailors revealed that each gown cost sh8,000, yet the school was charging sh50,000 for pupils to put them on for just a few hours.

The tailors revealed that each gown cost sh8,000, yet the school was charging sh50,000 for pupils to put them on for just a few hours.

Grace, not the real name, was in top-class last year at a kindergarten located in Kira municipality. Upon completing her top-class, the school organised graduation where each pupil was expected to pay sh60,000 as graduation fee.

Grace's mother, a vegetable vendor in Kireka, was faced with the challenge of having to raise the money. Her daughter would tell her that the teacher demanded the payment every day. 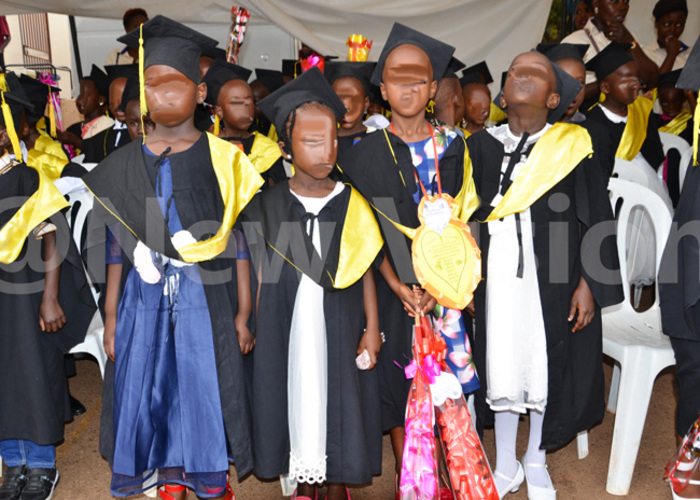 "The teacher also told her that if she does not pay she would not graduate. My daughter put me on pressure. It was unfair but I had nothing to do. I had to borrow the," she says.

She adds that her son, who is in Primary Five, did not graduate after nursery but he is performing well at school. She wondered why her daughter had to pay all this money for just a ceremony. She feels cheated.

"I struggled to pay school fees and was finally relieved that I was done with pre-primary payments. I think schools are trying to extort money from parents," she said.

Grace is not alone, many parents whose children completed nursery school, grapple with paying money for children's graduations. Yet, for some schools, it is more expensive than university graduation fees.

"The money was too much. I tried engaging that school such that I get a cheaper photographer but the school insisted that the money has to be paid to the school for special photography," Kazibwe explained.

He said even the money paid for the gown is uncalled for because the gowns are kept in the headteacher's office.

"Why pay for the gown that the child puts on for a few hours and then taken away by the school for the next lot of grandaunts. It is cheating," he notes.

"I remember attacking the teachers and the school administration requesting that I print my own photos because the photographer had agreed to be given the photo at sh7,000," she noted.

The parent said she took an initiative to find out where the school buys the gowns and, to her surprise, the tailors revealed that each gown cost sh8,000, yet the school was charging sh50, 000 for pupils to put them on for just a few hours. 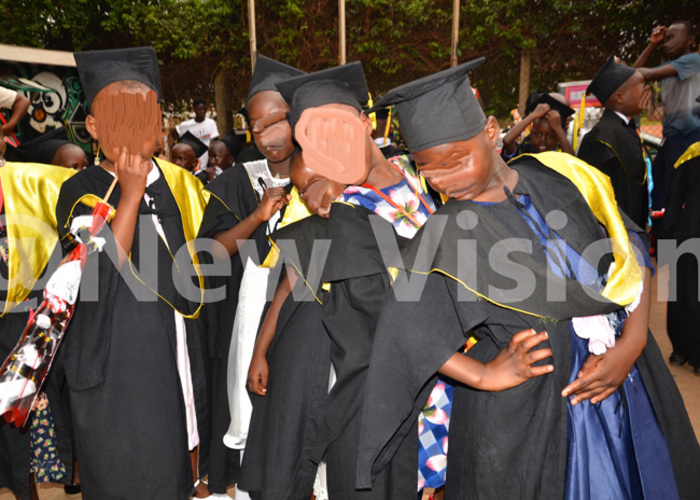 Is it necessary to have the graduations?
Moses Kintu, the headteacher Brighton Junior School in Bweyogerere, said graduation for nursery school is not a big deal. He, however, noted that if a parent cannot afford to pay for the graduation, then a school should not force them and should not withhold the children's report cards.

He said at Brighton the parents and the school administration agree on how much should be charged for the.

"This should not oppress parents after they have struggled to pay school fees from daycare to top-class. The party is just aimed at encouraging children to read hard such that they put on the real gown after university," he noted.

He added that sh50,000 is enough for the whole graduation.

Dr. Ruth Senyonyi, a counselling psychologist at Bank of Uganda, said a child graduating from nursery to primary is not bad since this creates a memory that can never go away.

She explained that it encourages the child to work towards something bigger, which is higher education. She, however, said it should not be a money-minting opportunity for schools.

"Why should you ask for a lot of money when the child has been paying fees. It should be something small celebrated at school with every parent contributing whatever they can afford," she says.

Patience Atukunda, an economist, says it does not make sense for a nursery child to spend money on graduation. She said the meaning of graduation has been lost. The schools are using this as an opportunity to rob money from parents.

Atukunda noted that many times she has encountered with parents shopping for graduation and that some of them spend more than the fees. Some even hold big parties.

"In this economy, money wasted on lavish parties for graduations should be saved for primary. This could be the reason why schools are exploiting the parents," Atukunda said.

Winnie Namanya, the director Elyon Kindergarten and Primary school, says schools charging exorbitant fees for nursery school graduations is uncalled for. She notes that sh50,000 is enough because the schools have gowns so all that is need is organising a small function.

About photos, Namanya notes that schools should allow photographers to attend the functions such that they take pictures at a cheap price other than setting a price for parents. "For those who can afford sh50,000 for the picture they can pay and those who cannot they can have a cheaper option," she suggests.

Fagil Mandy, education consultant says graduations for nursery children are one of the many exploitative means schools are using. He says that besides charging money for holiday packages and homework which parents pay for reams of papers, the schools are cheating parents through graduations.

He adds that graduation was something that someone had to work towards, "For one to put on a gown and a hood meant that you are now ready to enter into the world of work. So what are we welcoming the nursery children to? Then even the primary, and secondary levels should also hold graduations because at these levels a child acquires a real paper that is of importance," Mandy noted.

He also noted that graduations corrupt the children's minds in thinking that they have achieved yet this is nothing. "Parents should stop that whole excitement of wasting money on buying party clothes and also putting up lavish parties. They should realize the schools are cheating them," he said.

What ministry says
Dr. Tony Mukasa Lusambu, commissioner in-charge of basic education advises schools not to force parents to pay for things that are not related to the curriculum.

"If there is any school that denies a child a report card for not taking part in the graduation, such a school must be reported to the authorities. Even primary schools should not ask parents for nursery cards because at six years a child is supposed to join primary," he notes.

He advised parents to stop being duped by the school into paying exorbitant requirements, as a parent asks of why you are paying for something.

Alex Kakooza, Permanent Secretary, Ministry of Education and Sports explained that it is illegal for schools to charge exorbitant fees and also extra charges that are not connected to school fees.

Noting that this strains parents and contradicts the ministry of education policy of providing cheap and affordable education to all children.

He revealed that graduation is for a university not any other level of education so schools should stop getting money from parents in the name of graduation.

"The ministry issued circulars to schools warning them against these exorbitant fees and the extra charges that are not in line with education. The graduation practice is not approved by the ministry of education so it is being used by schools to attract money from parents and some numbers," he revealed.