Mining companies cry out as their exports ...
Next Story

Vision Group organized the free, express verification exercise with the Ministry of Lands supported by the Democratic Governance Facility (DGF).

The Ministry of Lands conducted a title verification exercise for members of the public for free of charge at New Vision Group head offices in partnership with Democratic Governance Facility (DGF). PHOTO: Patricia Turyahebwa

Vision Group organized the free, express verification exercise with the Ministry of Lands supported by the Democratic Governance Facility (DGF).

Of the one hundred people who benefited from a free land title verification exercise at the Vision Group Head Office in Kampala on Saturday, three almost got heart attacks when they learnt with shock that their land is in the process of being transferred by people very close to them without their knowledge.
Vision Group organized the free, express verification exercise with the Ministry of Lands supported by the Democratic Governance Facility (DGF). Other stakeholders who helped to sensitize the public on land matters at the one day event were Buganda Land Board, Uganda Police Force, The Administrator General's Office, officials of the Judiciary and members of the Legal fraternity through Legal Aid Service Providers Network (LASPNET), Justice Centres Uganda and Uganda Law Society.
Although most participants generally enjoyed the event at which their land queries were handled effectively by officials and experts from the relevant sectors, at least three people almost collapsed when the Ministry of Lands ICT expert fed their title deed particulars into the computer and he gave them the status of their land.
One lady who presented her title of 30 acres from which she recently sold one acre was shocked to be shown that the buyer has already subdivided the land into many pieces for each of which he is now processing titles. This he managed to do by using the her photos, signature and national ID which she supplied on the mutation forms for the transfer process to make copies for transferring the rest of the land. The ICT officer Ivan Twinobusingye has advised her to immediately report to the land commissioner's office on Monday with her original documents to have the process stopped. Due to the seriousness of the matter we are withholding the names of the persons and the location of the land in question so as not to jeopardize the investigations before they start. 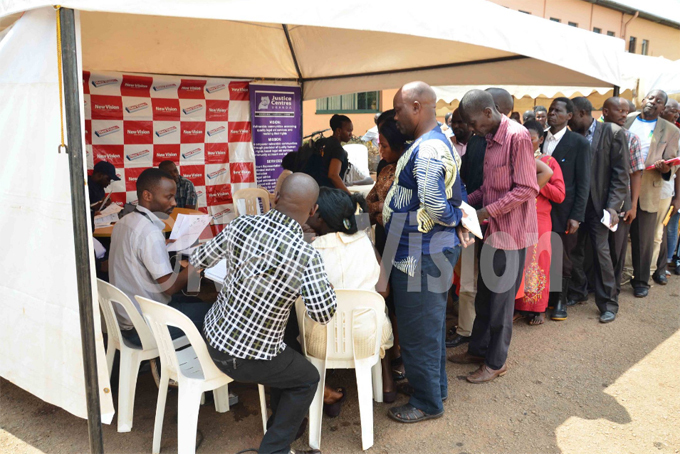 The Ministry of Lands conducted a title verification exercise for members of the public for free of charge at New Vision Group head offices in partnership with Democratic Governance Facility (DGF). PHOTO: Patricia Turyahebwa

Like a medical lab officer who has the unenviable task of telling a patient that he has an incurable illness, Twinobusingye also broke bad news to a gentleman who presented his late father's land particulars which he believed belonged to him and his siblings. It turns out that the young man who was adopted by the deceased and was the one who stayed with him in his last years, managed to get all the land transferred to himself. The shocked biological son embarked on frantically efforts to contact his siblings to see what they can do come Monday. Twinobusingye also advised them to report to the commissioner and get guided on how to seek a solution, warning however that theirs was going to be a longer process that may involve legal work.
The third person to get a rude shock had not even done any transaction on his land. He was therefore astounded to find that his land has been transferred into the names of his ‘best' friend. He said the man has been accessing his home frequently and they share so much together that he could easily have accessed his identity card and easily forged his signature. He is also expected to be on his way his way to the commissioner's office. We cannot yet tell if he is confronting his ‘best' friend over the weekend.
"Until you get the new computer titles, the surest way to protect your land is to check every once in several months, Twinobusingye said adding, "Most people do not know where to go and where to start when faced with such situations.  So arrangements like this event go a long way to help them know the how to pass through genuine channels in handling land matters,"
Hundreds of Ugandans who gathered at Vision Group headquarters also benefitted from free legal consultation by Justice Centers personnel and Uganda Law Society personnel. The legal manager of Buganda Land Board briefed them on how to regularize their tenure on Kabaka's land and invited them to go to the designated offices where to pay Busuulu, as the surest way to protect their tenure on the land. Valuable guidance was also given by LAPSNET's Sylvia Mubiru Musoke, Land Police Commandant Charles Mutungi, Police Publications chief Emiliano Kayima and Justice spokesman Solomon Muita.
This story has been prepared with support of Democratic Governance Facility - DGF

Cuba gets first prime minister in over 40 years