Agony: I am crushing on my workmate
Next Story

President Museveni said military police is trained to manage crowds like the Police would do.

President Museveni said military police is trained to manage crowds like the Police would do. 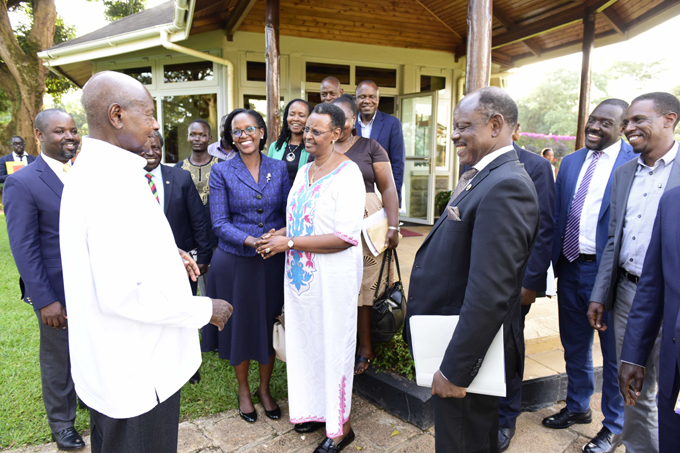 The Minister of Education and Sports Hon. Janet Kataha Museveni raised various issues affecting the University including alleged sexual-related abuses, the security situation at the university, harassment of the university administration by some people and the alleged tuition fees increment at the country's oldest higher institution of learning.
Regarding the issue of the deployment of the military police at Makerere University to provide security, President Museveni said that it is not the work of the military police to do that because they are not trained to manage crowds like the Police would do.
"My worry about the military police deployment at Makerere University is that they are not trained for that. The military is supposed to deal with crimes like terrorist attacks. They can back the Police but not to head the security at the University. I am going to direct the Inspector General of Police, Martin Ochola, to develop a security plan for Makerere University," he said.
Museveni said that Makerere University students should be allowed to sit their examinations, adding that people whose wish is to fail the university are the ones who are peddling the idea of the postponement of the students sitting for their examinations.
The President used the meeting to emphasize the need for Makerere University to concentrate more on science-based subjects because scientists are needed more in the job market today.
Professor Barnabas Nawangwe, the Vice-Chancellor Makerere University on his part clarified the issue of tuition increment saying they are implementing the request by University Council.
According to a statement issued last week by the university management, there has been no tuition increment this academic year. The students continue to pay the fees as per the structure is given to each student at the time of admission. The policy being contested by the students was approved and implemented in July 2018 and that it was approved after a thorough report presented by the special committee of the Guild representatives appointed by the Guild leadership whose work started on 4th June 2018.