“Today’s round was pretty much better than any round I have ever played on this course; I played one-under..."

Kenya's Dismas Indiza chips on the 15th green. He maintained his lead after the second round of the Pam Golding Golf Tour at Lake Victoria Serena Golf Resort and Spa, Nov 7 2019. Photos by Michael Nsubuga

“Today’s round was pretty much better than any round I have ever played on this course; I played one-under..."

WAKISO - Five Ugandan professionals made the cut as Kenya's Dismas Indiza maintained top spot, after the second round of the Pam Golding Safari Tour Golf Open at the Lake Victoria Serena Golf Resort at Kigo in Wakiso district, Thursday.

Herman ‘Deco' Mutebi, Ronald Rugumayo, Becca Mwanja, Abbey Bagalana and Phillip Kasozi are the only Ugandan pros that will partake on the sh37m prize fund having made the cut that was set at +4.

Indiza shot a second-round two-under-par 70 to maintain the lead, one stroke ahead of fellow national Edwin Mudanyi, who also returned the same score in the tightly contested event.

Indiza, a five-time Uganda Open champion and Safari Tour player, who leads the overall tour standings with 190.6 points, and holds the Serena course record (63gross), should have been further ahead but was undone by a double bogey on the par-3 hole No.15, but managed four birdies regardless. Becca Mwanja was delighted to make the cut for the first time on the Safari Tour.

"I wanted to play six under today and maybe four-under in the third round tomorrow and then go for it on the final day but things didn't work out. But I'm still there,  so let me see how I will wake up," Indiza said.

Uganda's best-placed player Mutebi, who missed the cut in Entebbe,  is targeting a top-ten finish after returning two-under to make the cut in 7th position.

"I putted very well today and I will be aiming for the same in the remaining rounds because I want to finish in the top ten and earn some good cash," Mutebi noted.

Uganda's Mwanja, a Safari Tour player was also delighted to make his first cut on the tour, in 12th place.

"I only turned pro early this year and I had only made the cut twice locally but had failed to make the cut in the last four Safari Tour events, so this one is a welcome relief," Mwanja stated. 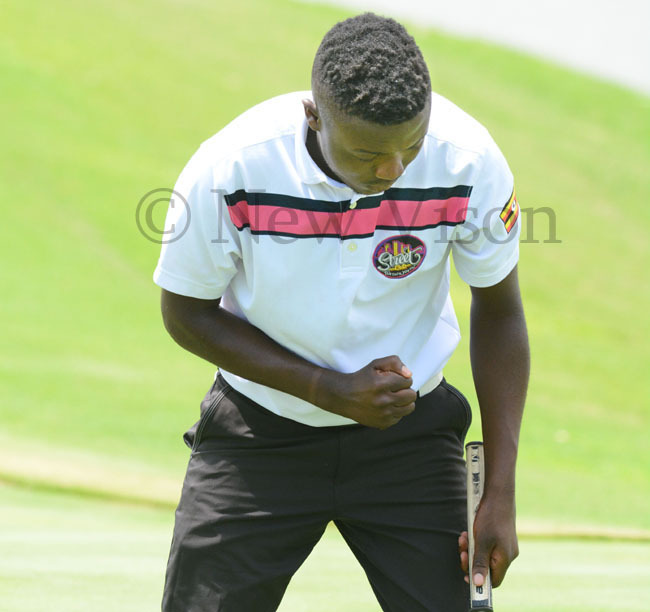 Herman Mutebi celebrates his birdie on Hole-No. 15 during the second round action.

Henry Lujja who was one of Uganda's best in the opening round eventually missed out after returning five-over 77 yesterday.

"I deviated from my routine and when I double-bogeyed hole-No. 7, I couldn't stick to my game-plan after," Lujja said.

There were also near misses for Silver Opio and Ronnie Bukenya who missed the cut by one and two strokes respectively.

In the amateurs' competition, Uganda Open Champion Daniel Nduva is in the lead, nine strokes ahead of Uganda's David Spencer, going into the final round of the amateurs 54-hole contest.

French speakers to get more opportunities

Museveni wins in 98 districts, Besigye in 14