Museveni hails France for the good relatio...
Next Story

Why Uganda is special to South Sudan

We bring you Uganda's contribution towsrds these peace talks

Dr. Garang on his arrival in Rwakitura, to meet President Yoweri Museveni, in July 2005. Photo/File

We bring you Uganda's contribution towsrds these peace talks

The two are meeting in the presence of President Yoweri Museveni and the head of the Sudan Sovereign Council, Abdel Fattah El-Burhan, at State House in Entebbe.

We bring you Uganda's contribution towards these peace talks. 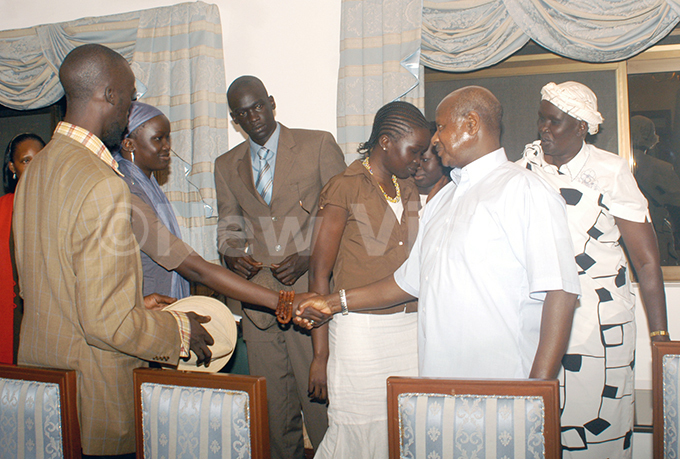 In the midst of chaos, Kiir announced that Machar had attempted a coup and violence spread quickly to Jonglei, Upper Nile, and Unity states. Since the outbreak of the conflict, armed groups targeted civilians along ethnic lines, committing rape and sexual violence, destroying property and looting villages, and recruiting children into their ranks. 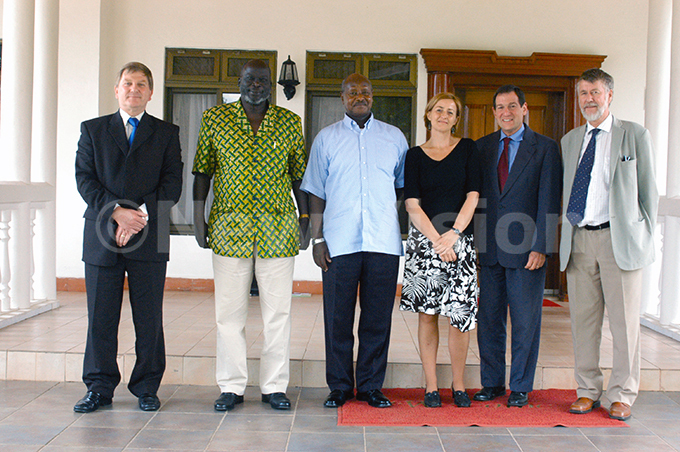 Late December 2013
The UN Security Council authorized a rapid deployment of about 6,000 security forces, in addition to 7,600 peacekeepers already in the country, to aid in nation-building efforts.

May 2014
The Security Council voted in a rare move to shift the mission's mandate from nation-building to civilian protection, authorizing UN troops to use force. 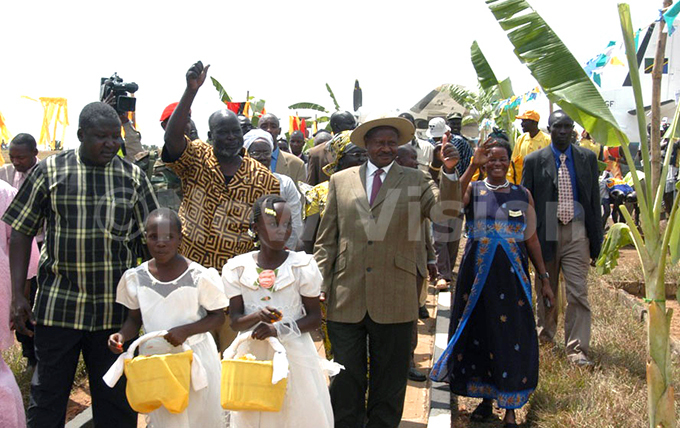 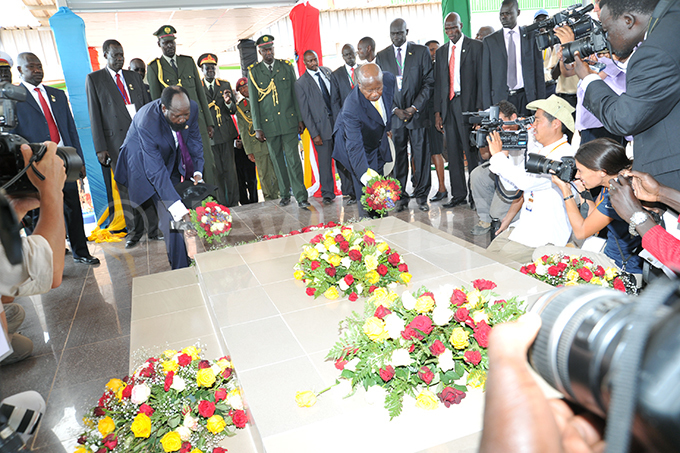 The 1000 mile journey to peace talks

August 2015
Under the threat of international sanctions and following several rounds of negotiations supported by the Intergovernmental Authority on Development (IGAD), Kiir signed a peace agreement with Machar. 
April 2016
As the first step toward ending the civil war, Machar returned to Juba and was once again sworn in as vice president, after spending more than two years outside of the country.

Soon after his return, violence broke out between government forces and opposition factions, once more displacing tens of thousands of people. Machar fled the country and was eventually detained in South Africa. 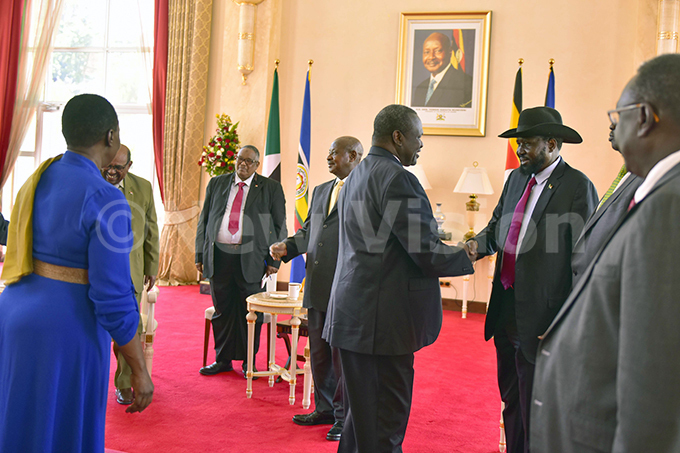 The President of South Sudan, Salva Kiir receives his former vice President, Riach Machar together with his delegation on July 7, 2018.


2017 and 2018
A series of cease-fires were negotiated and subsequently violated between the two sides and other factions.  (Reference: Global conflict tracker) 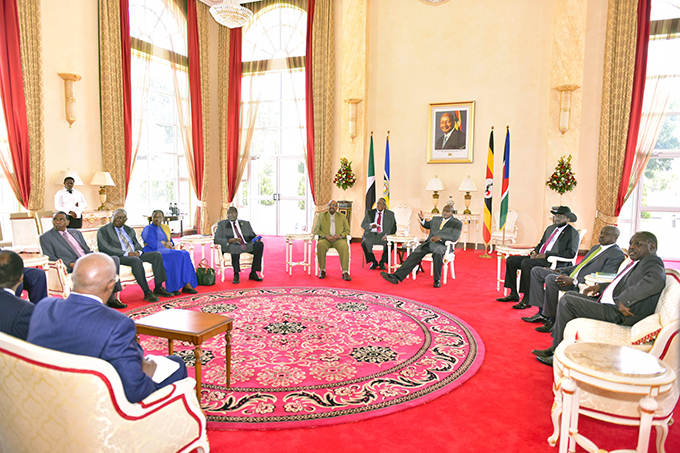 The President of the Sudan Omar Bashir, President of Uganda Yoweri Kaguta Museveni and the President of South Sudan Salva Kiir among other ministers and delegates during a peace talk meeting at the State House in Entebbe on July 7, 2018. 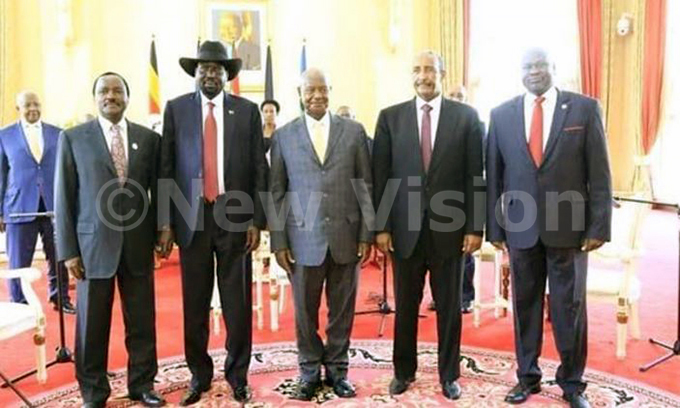 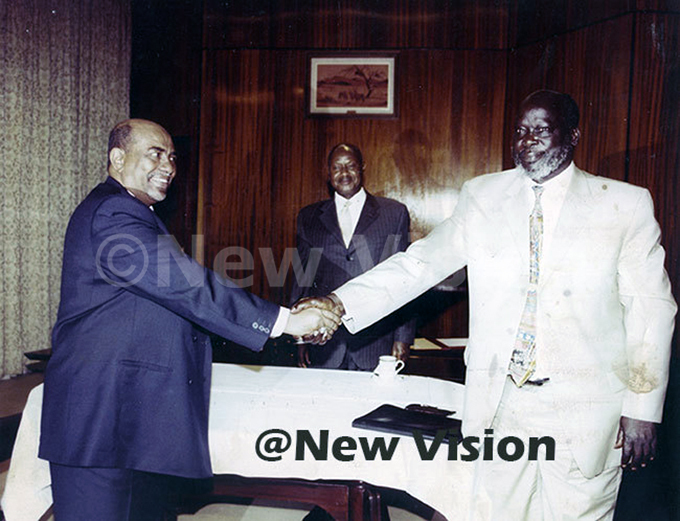 President Yoweri Museveni was in the South Sudan capital Juba where he joined regional leaders for an impromptu meeting in their quest to chart out the way forward to achieve total peace in Sudan. Other attendees included Prime Minister of Ethiopia, Abiy Ahmed, Sudanese parties including the Revolutionary Front represented by Dr. El-Hadi Idris Mustafa and the SPLM North represented by Gen. Abdalla Aziz Adam El Hilu. 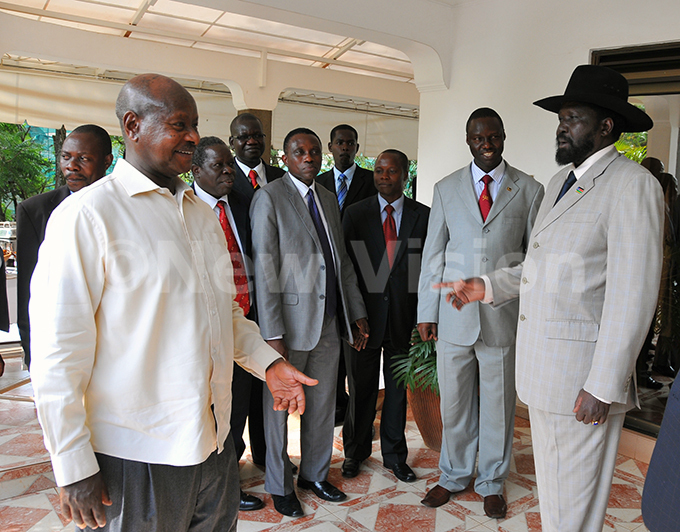 Salva Kiir came on a two-day working visit to Uganda at the invitation of President Museveni. The discussions also included matters relating to the extension of roads and electricity to South Sudan's capital, Juba. Museveni also introduced Kiir to members of the East African Business Council with whom he had earlier held a meeting.

In a bilateral meeting, Kiir briefed his host on the progress of implementation of the Peace Agreement, indicating that it was largely on course with the exception of a few issues that needed to be resolved. 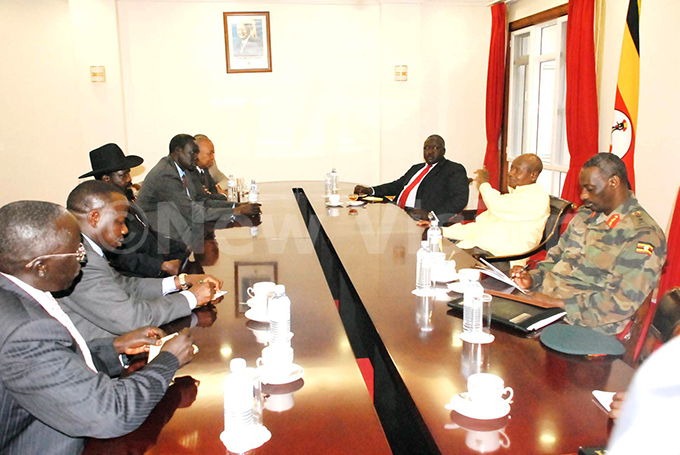 October 31, 2018 President Yoweri Museveni was in Juba for the peace celebration day

The celebrations were under the theme "Celebrating the dawn of peace, appreciating friends, cherishing reconciliation and Unity," took place at the John Garang Museum in Juba.

South Sudan's President, Salva Kiir and his rival, Riek Machar signed a final power-sharing deal, raising hope of an end to a civil war that tore the country and claimed thousands of people. The deal was signed in the presence of Sudanese President Omar al-Bashir and his counterparts from Kenya, Uganda, and Djibouti, along with foreign diplomats. 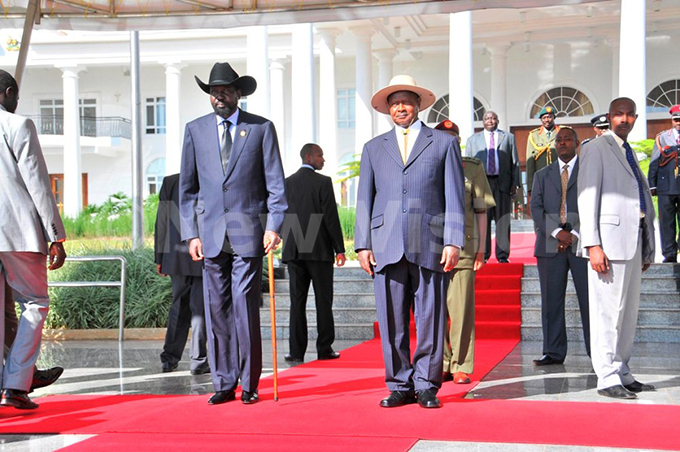 
June 2018  South Sudan's Kiir and Machar participated in negotiations mediated by Uganda and Sudan after almost five years of civil war in South Sudan. Later in the same month, they signed the Khartoum Declaration of Agreement that included a cease-fire and a pledge to negotiate a power-sharing agreement to end the war.

President Museveni met a delegation of the Sudan People's Liberation Army (SPLA), led by General James Ajong Mawut, the Chief of Defense Forces of Republic of South Sudan conveyed a special message and a letter of appreciation from President Salva Kiir of South Sudan to President Museveni, commending him for the continued support and solidarity with the government of South Sudan. The President and the General discussed UPDF - SPLA security cooperation and training 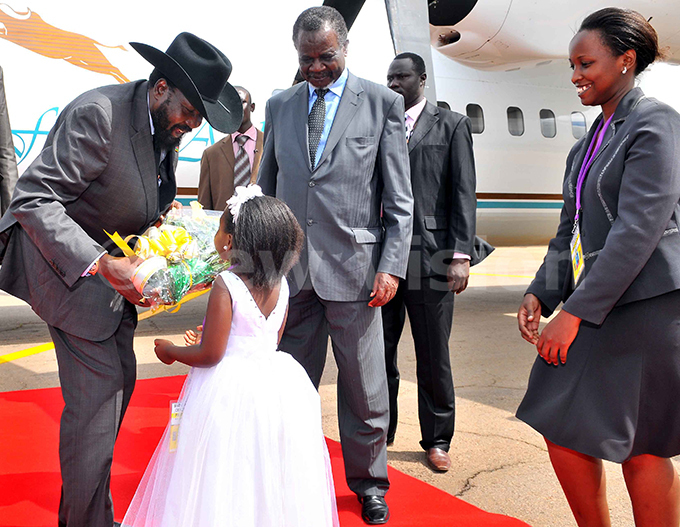 For the first time in 19 years, Sudanese President Omar El Bashir came face to face with the Leader of the SPLA Dr. John Garang de Mabior. The two met under the mediation of President Museveni at the International conference center.