Simon Okwii, 39, a resident of Aliedi village in Opuyo parish sat for his first Mathematical Paper on Monday Morning.

Simon Okwii and his classmates having fun on the way to the seating Centre at Opuyo PS to sit for PLE. Photo by Emmanuel Alomu

Simon Okwii, 39, a resident of Aliedi village in Opuyo parish sat for his first Mathematical Paper on Monday Morning.

UNEB   PLE
SOROTI - A father of five is among the 67 Primary Seven Candidates sitting for the Primary Leaving Examinations at Opuyo Primary School in Soroti Sub County, Soroti District.
Simon Okwii, 39, a resident of Aliedi village in Opuyo parish, sat for his first paper - Mathematics - on Monday morning.
Since term one, Okwii has been studying at Aliedi Nursery and Primary School with his four children.
In his family of six members, Okwii is the most educated. His wife Suzan Aanyu ended in Primary Four.
Okwii's firstborn  Phoebe Atim aged 14 years is in P.6, Secondborn Simon Okwii (Junior) aged 11 years in P.5, Joshua Etumu aged eight years in P.2 and Samali Abyeto of four years is in Baby class. The mother is still carrying the fifth born. 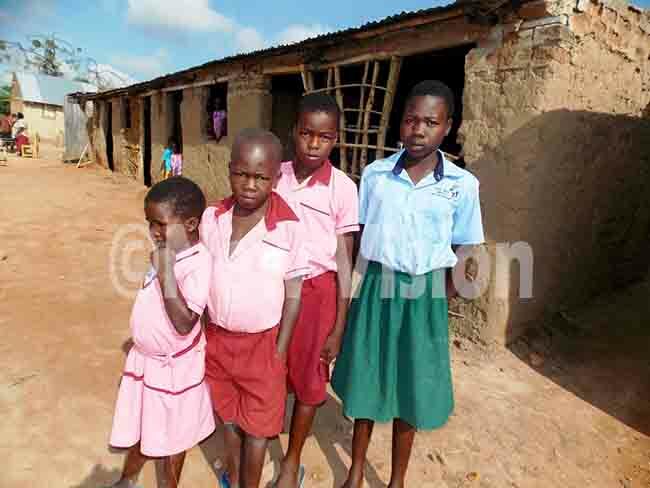 "We are very happy to share the same school with daddy because he keeps helping us to read difficult words," said Atim.

Okwii said it's good to share the school with the father because he provides basic requirements including money for breakfast.

Okwii who was promoted to Primary Seven in 1998 dropped out of school after both of his parents passed on.

"I returned to school after I realised that one needs to be educated today in order to get a job or to survive," Okwii whose ambition is to become an engineer said on Monday morning before seating for his Maths paper.

Okwii has been working as a helper for Masons building houses in Soroti.

According to him, he balances his work of being a helper, with family duties and education so that he pays school fees worth Sh372,000 termly for all of them.

"Some times the younger daughter of mine cries for money at school. I sometimes give her but on some occasions, I tell them that there is no money because all of us are at a school-no time to go and look for money and they understand," he said.

In the school records, Okwii passed in Division Four with 33 aggregates in the recent Mock Exams.

Okwii is promising to get 24 aggregate in this 2019 PLE. He advised other older persons whose education was disorganized during insurgency to return to school so that they attain a better future.

"In education, the age does not matter but knowledge in you," he said.

Samuel Joseph Ageu, Okwii's headteacher said the brothers of his elder ‘pupil' wanted to find him a job but he lacked papers.

According to Ageu, Okwii tried joining most schools but failed due to his age and they finally received him.

He explained that Okwii respects teachers and comes to school in time along with his four children.

Ageu said the only challenge Okwii is faced with is getting school fees and sometimes children disturb him asking for what to eat especially during break-time. Andrew Oinya who has been studying with Okwii in P.7 said they were lucky to share with a parent one class because he sometimes gives them pens or pencils in case a pupil lacks.

Naume Achol the director of Aliedi Nursery and Primary School said Okwii is a committed parent and they are expecting him to pass well.

"To a visitor, it's not easy to know that Okwii is sharing the same school with all his four children.

Hatred stirred by leaders blamed for rise in journalist murders