Prophet Mbonye fails to report to Police, ...
Next Story

In a joint petition, journalists representatives of UPPA, UJA and HRNJ raised fundamental issues on rights

Journalists taking part in the protest on Monday morning. Photo by Francis Emorut

In a joint petition, journalists representatives of UPPA, UJA and HRNJ raised fundamental issues on rights

Top Police officers on Monday met journalists who were arrested early in the day and taken to Central Police Station in Kampala.

The journalists were petitioning the Police against brutality suffered by scribes who were covering students' protests at Makerere University last week.

Journalists from different media houses holding placards marched to the Police headquarters in Naguru to deliver their petition but were instead bundled into Police vans.

The Police officer commanding the arrest and who didn't disclose his identity told journalists that they were holding an illegal assembly.

He was joined by another counter-terrorism officer only identified only as Gumuzirisa who ordered the arrest of 10 journalists.

AIGP Asan Kasingye, the Police political commissar told journalists that there are contradictions in society which should be solved amicably by dialogue.

"Contradictions in society need to be resolved through dialogue. Journalists should sit on a round table with the Police and solve issues raised," he said. 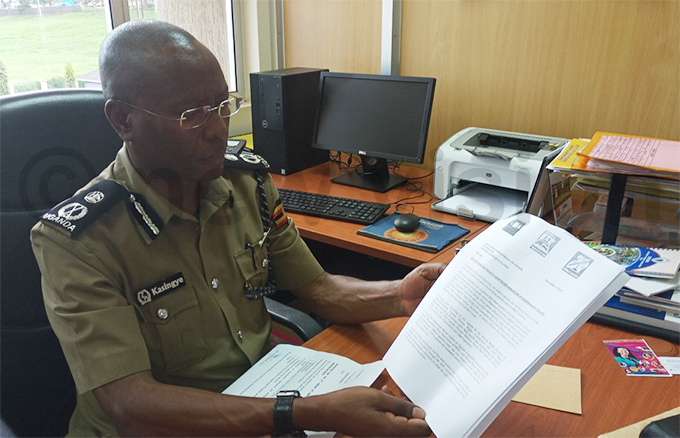 Kasingye reminded the scribes that they and the Police are allies who need each other in the line of duty to serve the public.

"We need to sit around the table and solve contradiction in a timely manner so that the public will see both parties working harmoniously," Kasingye said.

Other top officers who met journalists were AIGP Abas Byakagaba, the head of counter-terrorism and AIGP Asuman Mugenyi, the head of operations.

They included the compensation of journalists brutalised during the students' protests at Makerere University, sensitisation of Police officers on respecting human rights, the Inspector General of Police making the Police a professional force, stop campaigns against journalists who some in the Police view as an enemy of the state.

Other issues in the petition include the parading of Police officers who brutalise journalists, give a directive to stop harassing journalists and others.

Kasingye told the scribes that his role was simply to deliver the petition to IGP Okoth Ochola for necessary action to be taken and journalists would be informed of the outcome.

He said Ochola could not receive the petition himself because he was attending another meeting of national importance.