Uganda fails East and Central All Africa G...
Next Story

The 23-year-old from Tooro Club beat off fatigue to claim his third major this year, to add to the Mayombo and Kinyara opens he won earlier on

The 23-year-old from Tooro Club beat off fatigue to claim his third major this year, to add to the Mayombo and Kinyara opens he won earlier on

On Saturday, Cwinya-ai rallied from behind to win the Castle Lite Entebbe Open at Entebbe Club beating over 30 players to the 10th edition title.

Coming off winning the Kinyara Sugar Open recently, and finishing fourth in the Kenya Amateur Stroke Play Championship last week, the 23-year-old from Tooro Club beat off fatigue to claim his third major this year, to add to the Mayombo and Kinyara opens he won earlier on.

Going into the last round of the 54-hole competition, Cwinyaai was 5 strokes off the leader, Michael Alunga but his three-under-par 68 in the final round ensured the victory. 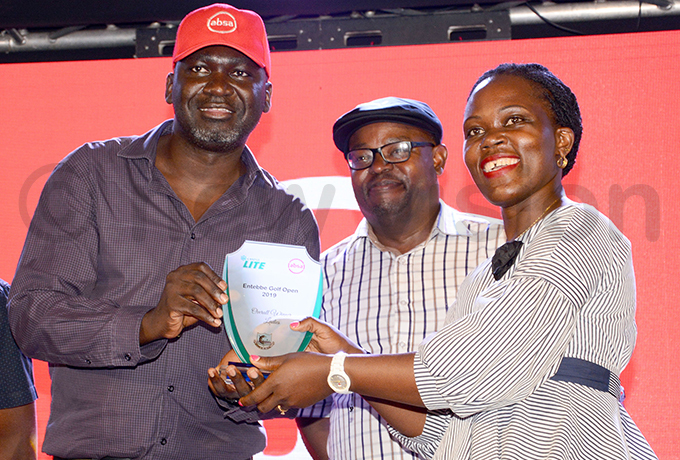 Absa's Stephen Odongo (left) hands a plaque to Godlive Nayebare (right), the overall nett winner in the ladies category after the tournament at Entebbe Club. Photo by Michael Nsubuga

"This is my fourth tournament in a month and I'm a bit fatigued but I had to fight. I was chasing five strokes off and chasing an experienced player Alunga but I came with a target of shooting 68 which I achieved and fortunately the leader messed up," Cwinya-ai said.

He wrapped up the win with five birdies and only three bogeys and is now focused to win more in the Serena and Kakira Open before the year ends.

"I will probably turn pro next year because my sponsor Isaac Aisu who is based in the UK has ensured I play all these tournaments because he gives me everything including money and clubs," Cwinyaai stated.

Earlier, Kenya's Justus Madoya won the professional's category with a nine-under 275 over 72 holes. 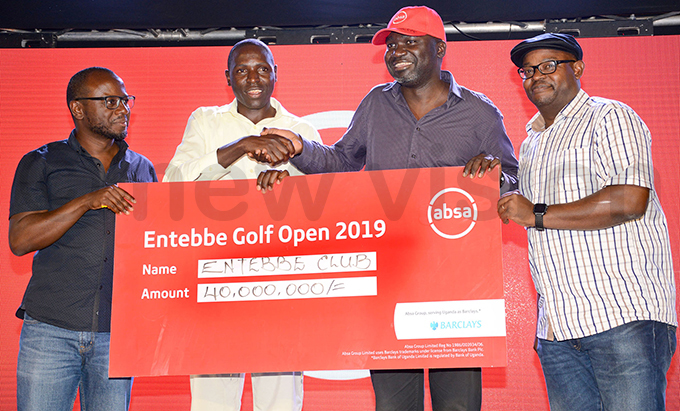 He also bagged an extra 50 Safari Tour points from the Entebbe tournament, taking his tally to 110.5pts from the four events played thus far.

"It feels good winning this because I have been fighting to win at least one tournament to open the door in my professional career, so it is good I have gotten one; it feels great," Madoya said.

"My last round was fantastic I had great shots from the tees and I had a good recovery and all my second shots were good and everything else about my game today was good.