The accident occurred at around 2 am at Cuny-Odyek swamp in Diima parish Mutunda sub-county Kiryandongo district.

The accident occurred at around 2 am at Cuny-Odyek swamp in Diima parish Mutunda sub-county Kiryandongo district.

KIRYANDONGO - Six people were killed and 22 others seriously injured, in a Saturday morning accident on the Kampala Gulu highway, involving three vehicles. 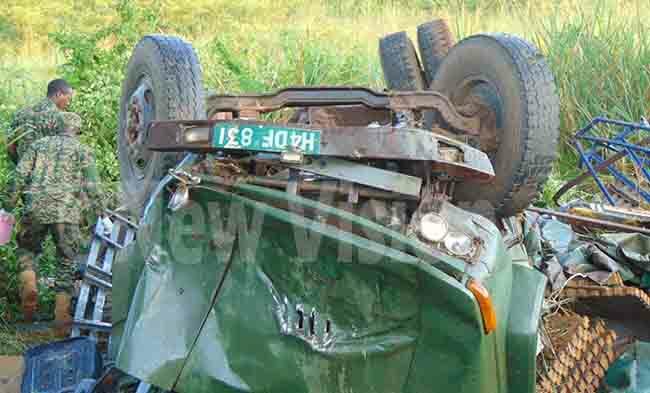 The Army truck that was involved in an accident with a KK traveler bus on Kampala Gulu highway in the Cuny-Odyek swamp in Diima parish Mutunda sub-county Kiryandongo district. Photo by Saidi Engola

The driver of the KK Traveler bus identified as Aumed Jumba died on arrival at Kiryandongo hospital where he was rushed together with other injured passengers. The driver of the army lorry is also said to be among the dead.

The regional Police Spokesperson for the Albertine region, Allan Julius Hakiza said he was yet to get details about the victims and how the accident occurred.

The KK Traveler bus overturned and rolled 90 metres from the point of the accident and army truck is damaged beyond repair. 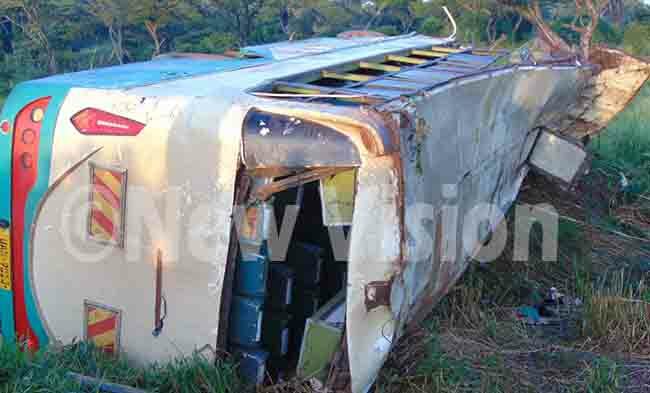 KK Traveler bus which overturned living four dead on spot and 22 others rushed to Kiryandongo hospital with. Photo by Saidi Engola

Army spokesperson, Brig Richard Karemire said he got a report of the accident where their driver died and others sustained injuries but said he had no other details. He sent his condolences to the bereaved families.

"Am sure the police should be able to investigate what happened," he said on phone.

KK Traveler company buses have been involved in several road accidents in the past years.

In November last year, a KK bus from Koboko to Kampala knocked dead a person at Enzeva area, Arivu sub- County in Arua district and the bus was set ablaze by the locals who also beat up the conductor.

In June 2016, a bus registration number UAM 829C belonging to the company, from Arua to Kampala knocked an elephant that was crossing the road and killed it, three people also died and ten passengers sustained multiple injuries.

Can I marry my ex-husband's cousin?

You can stay friends with your ex- spouse

Total Man: Who invited her?