China warns it won't tolerate dissent in H...
Next Story

How parents are promoting teenage prostitution in Bugiri

“I need to expose the shameless parents in my area, Naluwelere. They encourage and send there teenage children to prostitution. They do this because they need money to fend for there families,” Mugeni said.

“I need to expose the shameless parents in my area, Naluwelere. They encourage and send there teenage children to prostitution. They do this because they need money to fend for there families,” Mugeni said.

Andrew Mugeni, the chairperson of Naluwelere speaks out. Photos by Solomon Muleyi

BUGIRI: Andrew Mugeni, the LC1 Chairperson Naluwelere, Bugiri district threw his arms about when telling the story of teenage prostitution in his village.

His voice, though audible, was reduced to stutters and croaks. His eyes, red and puffy from stifling tears. He flung the sides of his jacket together, struggling to compose himself for the cameras and crowd he was speaking before.

He said he is saddened at how the parents and fellow elders in his village (Naluwelere, Bugiri district) have crippled the fight against teenage pregnancies and child marriages because of poverty.

"I need to expose the shameless parents in my area, Naluwelere. They encourage and send there teenage children to prostitution. They do this because they need money to fend for there families," Mugeni said. 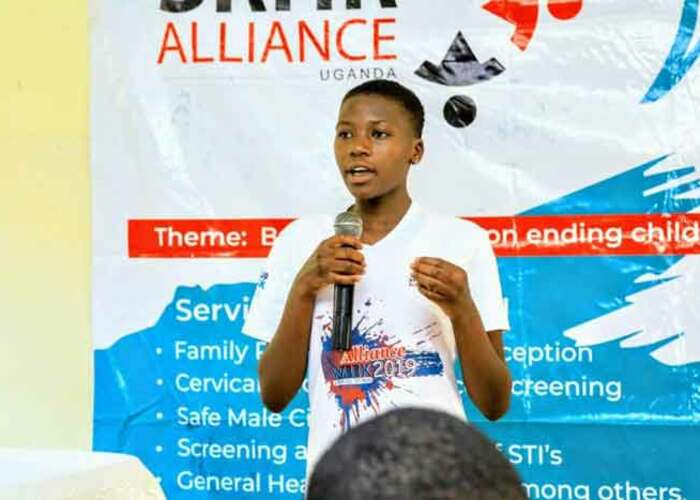 According to the Executive Director of Sexual Reproductive Health Rights Alliance, Charles Owekmeno, the teenage pregnancy level in Bugiri is at 29%.

"40% of Ugandan girls are getting married before 18 years. 20% of those are getting married before 15 years. 75% of the population are young people. We need to realize that they are a resource that needs to be taken care of. It's the most important moment for the country. We should be investing in making sure they stay in school, develop careers," Owekmeno, the head of the SRHR Alliance told a group of LC Chairpersons during a dialogue with them at the Executive Hotel in Bugiri.

The Situation
The dialogue was held by the Sexual Reproductive Health Rights Alliance to install area Chairpersons as champions in the fight against teenage pregnancy in the Busoga Region.

According to Owekmeno, the war against child marriages can only be won if it starts from the grassroots, and up to the government. It is during the dialogue that many other chairpersons confirmed the state of prostitution in Naluwelere.

During the dialogue, Remmy Nakitende (17) confirmed that she got pregnant through a similar system.

"My parents were not paying attention to me. I was in boarding school, and they never came to visit me. I called them to tell them I lacked essential needs, but they didn't even visit. Eventually, after advice from friends, I started going to bars looking for men to give me some money. One of the men impregnated me, and I dropped out of school," said Nakitende.

Without necessarily confirming if she was involved, Nakitende said many girls her age, and way younger engage in prostitution in Naluwelere. 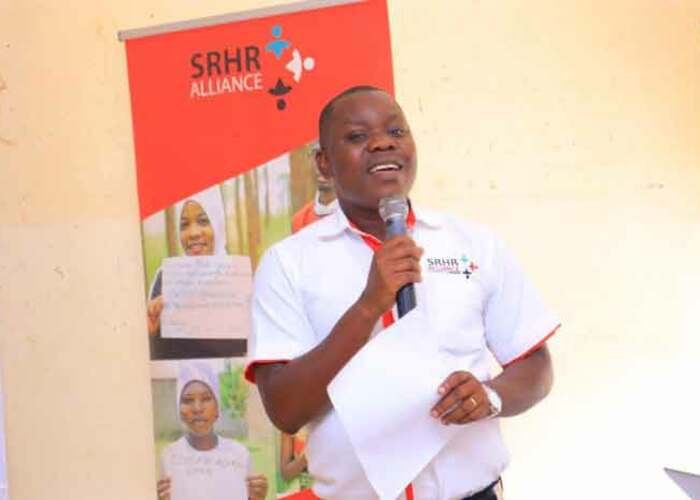 "The truck drivers are the biggest customers of teenage prostitution in Naluwelere. Some school teachers indulge secretly, but the truck drivers from the different parts of the country that ply in Bugiri always go there and they know that the prostitutes are young girls," Nakitende shared, startling the audience in the process.

That Local Council leader, Andrew Mugeni spoke about it, wasn't the first story of Naluwelere's notoriety for prostitution.  According to Majid Lukoda (57,) an elderly resident of Naluwelere, the prostitution vice in Naluwelere dates back to the early '70s.

"At the village level, especially given our cultures, girls started sex at an early age. That happens up to now in many Busoga Region villages; when girls as young as 14 years are very sexually active. And as such, many get married at very young ages because their parents look at them as dowry," Lukoda says. 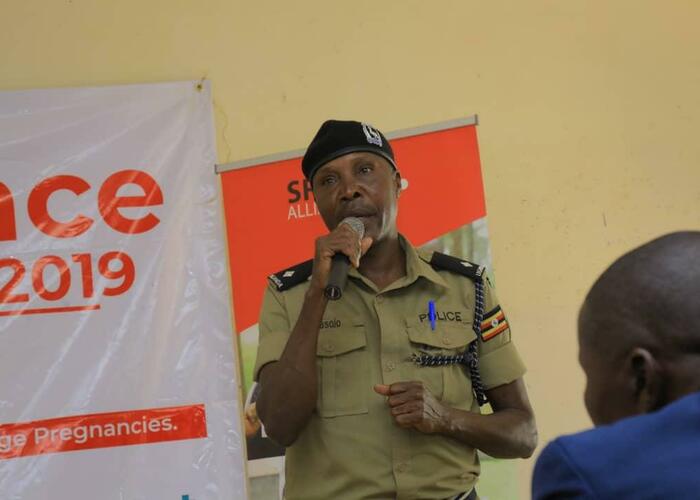 Samuel Masolo, the DPC of Bugiri

"In the '70s, it was the older girls who had failed in there marriages that did prostitution. The prostitution vice than grew, and many girls got involved. With time, the age bracket became younger, to as low as 13 years. The teenage prostitution vice has, however, now blown out of the equation," added Lukoda.

The dialogue between the Sexual Reproductive Health Rights Alliance and the Local Council leaders of Bugiri tabled a panoply of resolutions. Many propositions, however, leaned to the need for government to install laws and institutions that work hand in hand with the police to prosecute the perpetrators of child marriages and teenage pregnancy. The DPC of Bugiri Police, Samuel Masolo was in attendance and spoke in the agreement of the same proposition.

Where art thou, real woman?

Grandma, dresses are worn only in family albums