Dr. Kigozi rallies Ugandans on HIV and AIDS
Next Story

I didn't have a cake at my wedding -Ntagali

KAMPALA - While presiding over the first mass wedding ceremony at All Saints Cathedral, Kampala, Stanley Ntagali, the Archbishop of the Church of Uganda, amused the congregation when he told them that he never cut a cake at his wedding.

"It is not what you see, it the love the person has for you that matters. These days' marriages are breaking because people are not marrying for love but for convenience. Marry the person you love, the riches will come. A family that prays together stays together," said Ntagali.

Ntagali added that when he was still in Masindi Diocese, he realized that many people feared to get married because of costly wedding parties.

"Stop making excuses that you do not have millions of money to entertain your guests at the reception, a reception is a luxury. If the two of you agree, get your parents blessings and come to church for blessings. The church is the most important thing, not a reception," he said.

Ntagali advised women to always welcome visitors in their homes and also to love their co-wives' children. 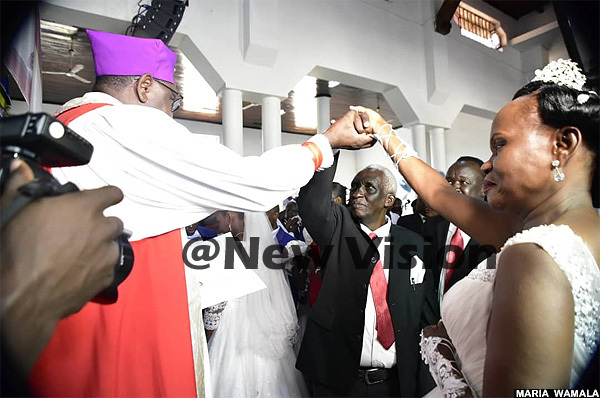 He also noted that relatives can break a marriage so couples have to know whose voice they should listen to.

"Relatives sometimes interfere with marriages and they can have opinions, but just focus on each other, no one will interfere with your marriage," noted Ntagali.


In her message read by Jocelyn Rugunda, Janet Museveni, the First Lady and Minister of Education and Sports, noted that many young couples misguidedly believe that in order to get married, they need to have a lot of money to splash on wedding receptions.

"This kind of thinking has prevented many young men and women from getting married and sometimes even got them into undesirable relationships. The real work of marriage begins as soon as the vows are made," she said.