Home
NEWS
Media
Supplements
Tenders
Notices
"I once dated a girl called Irene. She was my first girlfriend. However, in 2001, I went to Nairobi for nine months and when I returned, I found her married. I was shocked and I nearly hanged myself."

"I once dated a girl called Irene. She was my first girlfriend. However, in 2001, I went to Nairobi for nine months and when I returned, I found her married. I was shocked and I nearly hanged myself."

This was after the president's meeting with the group in Kibuye, Kampala on Saturday.

Buchaman rose to fame in 2005 after passionately asking the ladies, Lwaki Temumatira? (Why don't you like me?) The song topped 2005's local charts and Buchaman instantly became a star.

In 2006, New Vision interviewed the singer and here is the life of the man who will be advising the President as described by himself.

Question: Who is Buchaman?
My name is Mark Bugembe and I am 24 years old. I was born and raised in Mukono as a ghetto child, but now I am a ghetto superstar. I chose the stage name Buchaman because, in my family, most people are butchers. My father is a butcher and so are most of my uncles. I am the vice-president of the Fire Base Crew (Bobi Wine is crew president). 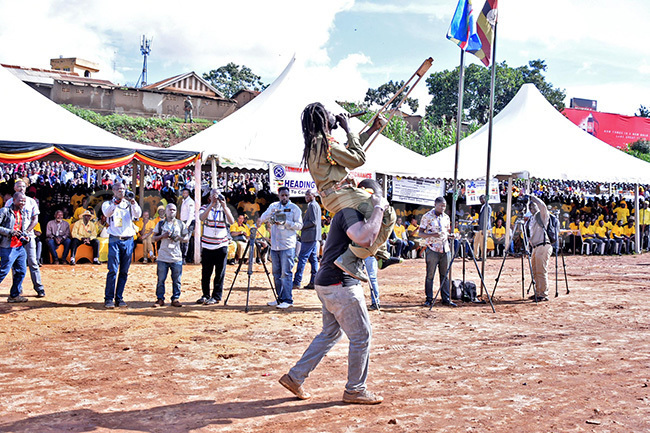 Buchaman being carried to meet the President on Saturday

How did you come up with the song Lwaki Temumatira? Was it after rejections from women?
I wrote the song from personal experience. After I had performed in Arua in 2003, two ladies came to me and asked for Bebe Cool, Bobi Wine and Chameleone. When I told them that the singers were out of the country and that it was Buchaman who was around, the babes assured me that they wanted them and not me!

When I tried to find out what was wrong with me, I realised that I was being shunned because I am lame, although I am handsome. I am one of the most handsome artistes in Uganda!

Who is the lucky girl in your life?
I don't have a girlfriend. Right now, I am single and searching.

Have you ever had a girlfriend?
Yes. I once dated a girl called Irene. She was my first girlfriend. However, in 2001, I went to Nairobi for nine months and when I returned, I found her married. I was shocked and I nearly hanged myself. That's when I came up with the song Irene (with late Weatherman). Irene only called me again after I sang Lwaki Temumatira because I was on everyone's lips.

Do you remember your first crush?
Yes. I was in Primary Five at Mukono Boarding Primary School. I had a crush on a girl called Susan. 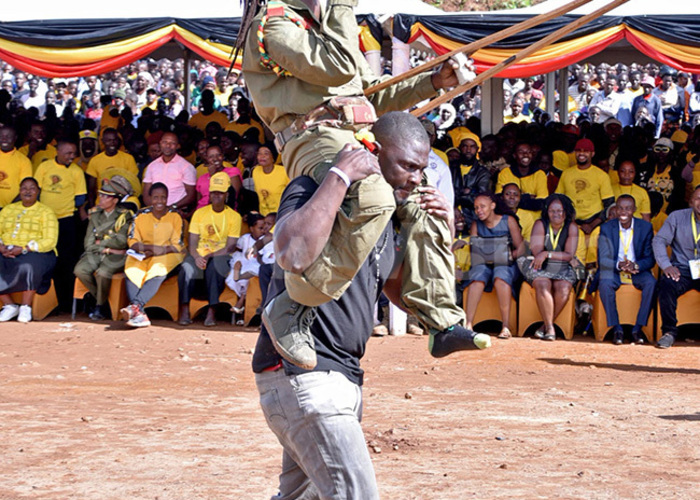 He went singing for the President

What do you look for in a woman?
I don't care about tribe, culture or religion. I like brown women, especially half-castes or whites, but Rwandese babes are my first choice; they have cool hips and they are generally beautiful.

Who is your favourite local female artiste?
Sheila Nvannungi. She is so beautiful. She has the qualities I want in a woman.

What kind of music do you love listening to at home?
You just look at me and tell the kind of music I love (looks at self). I am purely dancehall!

How has fame changed your life?
There are a lot of temptations in the music industry. Sometimes you are forced to do what you wouldn't have done. There are times when skimpily-dressed ladies jump onto you and you cannot fight the temptation!

That's why we have lost many of our fellow artistes to AIDS. Otherwise, I have always wanted people to conceive me as Mark Bugembe. 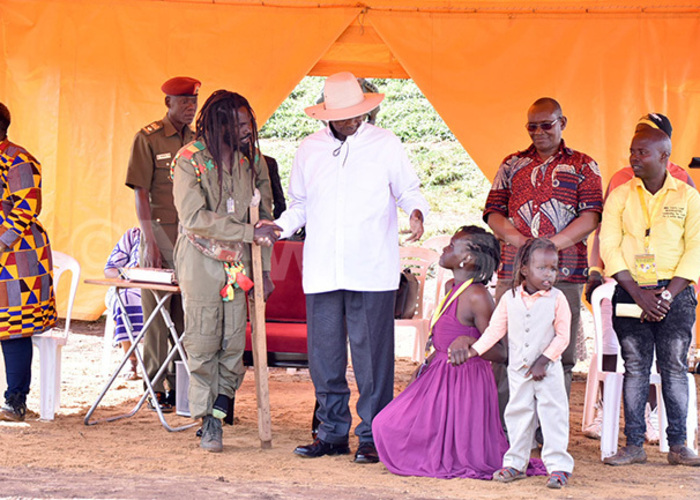 Buchaman introduces his family to the President

Do you get many girls mobbing you?
Definitely. Girls mob me after performances. They have always sent me photographs and phone contacts (to Dream Studios) but I personally have a problem with women. They have seen me after I have become a star.

Some of them love my cool dreadlocks, others my good performances on stage while others love my bling-bling (jewellery). I don't trust them because I think they love Buchaman the star and not the original Mark Bugembe.

Which local artiste would you like to sing with?
Julianna Kanyomozi. I love working with sexy women like her. She also has a good voice and singing style. When you sing with Julianna, it has to be a good song. I would also love to sing with Blu*3.

You own a car (Pajero short chassis). Can you drive?
Yes. I can drive but I don't drive because I am a star and stars don't drive. I just want to put on my bling-bling, get to the back seat and get driven. Those who drive are not stars.