Academicians want an overhaul of education...
Next Story

Forum launched to give scientists platform to publicise their research

Every year University students carry out research for an award of a degree, most of these remain on university shelves unpublicised while only very few get published in European peer-review journals.

According to Alexandre Lyambabaje, the executive secretary Inter-University Council for East Africa (IUCEA) noted that publishing research European journals is very expensive and even when one affords the amount; it becomes inaccessible for the people in the East African Community (EAC).

The launch was presided over by the Minister of State for Higher Education, John Chrysostom, on behalf of the first lady. 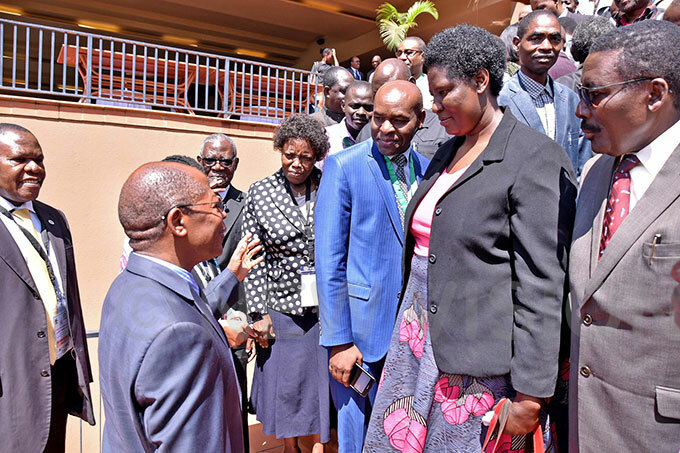 This was during the 1st EAC Science, Technology and Innovation Conference in Kampala. In her speech, the first lady, Janet Kataha Museveni noted that the forum will bring together scientists, the public and the private sector.

"This will facilitate the sharing of scientific innovations and technologies developed by universities and research institutions in the region," she said.

Lyambabaje explained that the forum will give a platform for scientific articles and researches to be posted for easy accessibility.

He said every two years, a conference will be held where the public and private sector will meet with scientists to deliberate on their findings.

He explained that this will go a long way in transforming society by helping people make informed policies and decisions.

Mrs. Museveni noted that though the EAC has registered an impressive performance of its economy, the growth can only be sustained if the application of STI is embraced by the member states.

"For growth to result in economic transformation, it must be knowledge-based and innovation-driven," she stated.

She stressed the need to build a strong partnership between government and the private sector in research and innovation, saying it is important in leveraging broader economic and social benefits from joint investments.

She called on the EAC to enhance the participation of women in STI, noting that the existing systems of education have prevented women and girls from having equal access to education in science, technology, engineering, and mathematics.

"I urge you all especially the private sector to make commitments to end this bias by enhancing and giving an opportunity to women and girls to build their careers and long-term professional advancement in science, technology, engineering, and mathematics," she said.

In his keynote presentation, Badru Ntege, the Group CEO NFT Consult, said that the advancements in STI and the population growth in the EAC, present a huge investment opportunity to East Africans.

Giving an example of China, he said there is value in numbers, noting that the EAC needs to harness and take care of its increasing population.

Again, quoting statistics on food waste in the EAC, he said that 30% of the food being wasted can be turned into a major foreign earner through value addition and exportation.

"We need to harness technology to ensure that we convert the waste into money," he said.

He noted that the health sector also presents a huge opportunity for scientists, noting that they can borrow from the Indian example to build pharmaceutical industries driven by technology.

Would you build your home next to burial grounds?